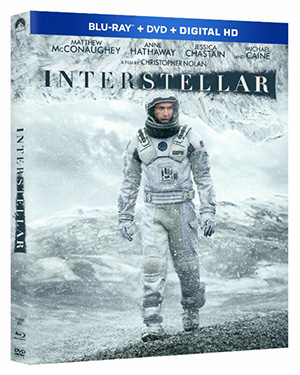 A breathtaking filmmaking achievement, INTERSTELLAR has been named one of the Top Ten movies of the year by Rolling Stone, Esquire, the New York Post and more, and has received five Academy Award® nominations including Best Visual Effects, Best Production Design, Best Sound Mixing, Best Sound Editing and Best Original Score. Academy Award-winner Matthew McConaughey1 stars as ex-pilot-turned-farmer Cooper, who must leave his family and a foundering Earth behind to lead an expedition traveling beyond this galaxy to discover whether mankind has a future among the stars. The film also stars Academy Award-winners Anne Hathaway2 and Michael Caine3 and Academy Award-nominees Jessica Chastain4 and John Lithgow5.

INTERSTELLAR will be available in a three-disc Blu-ray Combo Pack with UltraViolet™ and three hours of in-depth, behind-the-scenes bonus content detailing the epic shoot, the scientific realities explored in the film, a look at creating the stunning visuals, plus an extended cut of “The Science of Interstellar” broadcast special and much more. For a limited time, the Blu-ray Combo Pack will also include an authentic, collectible Interstellar film cell from an original 70MM IMAX print of the film.

Blu-ray #2
* The Science of Interstellar - Extended cut of the broadcast special.
* Plotting an Interstellar Journey - Discusses the film’s origins, influences and narrative designs.
* Life on Cooper’s Farm - Bringing Americana and the grounded nature of a farm to a sci-fi space movie.
* The Dust - Learn how cast and crew avoided sand blindness, and see how to create, and clean up after, a catastrophic dust storm.
* TARS and CASE—Designing and building these unique characters and how they were brought to life on set and in the film.
* Cosmic Sounds - The concepts, process, and recording of Hans Zimmer’s unforgettable score.
* The Space Suits - A look at the design and build of the suits and helmets, and what it was like to wear them.
* The Endurance - Explore this massive set with a guided tour by production designer Nathan Crowley.
* Shooting in Iceland: Miller’s Planet/Mann’s Planet - Travel with the cast and crew to Iceland and see the challenges they faced in creating two vastly different worlds in one country.
* The Ranger and the Lander - A look at the other two spaceships in the film.
* Miniatures in Space - Marvel at the large-scale models used in the explosive docking sequence.
* The Simulation of Zero-G - Discover the various methods that the filmmakers used to create a zero gravity environment.
* Celestial Landmarks - Explore how the filmmakers used practical special effects informed by real scientific equations to give the illusion of real space travel for both the actors and the audience.
* Across All Dimensions and Time - A look at the concept and design of the Tesseract, which incorporated a practical set rather than a green screen.
* Final Thoughts - The cast and crew reflect back on their Interstellar experience.
* Theatrical Trailers

DVD
* Feature film in standard definition
The Blu-ray Combo Pack available for purchase includes a Digital Version of the film that can be accessed through UltraViolet™, a way to collect, access and enjoy movies. With UltraViolet, consumers can add movies to their digital collection in the cloud, and then stream or download them—reliably and securely—to a variety of devices.