Following is a transcript of some highlights from the interview with Mitch Pileggi, followed by the video. Don't forget to check out the full photo gallery and other interviews from the press room, as well as highlights and photos from the panel and premiere. 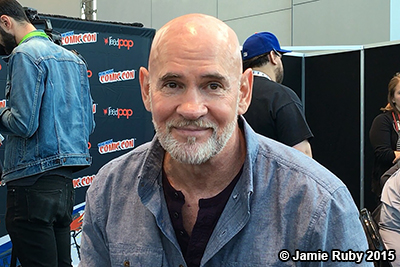 It was awesome. I was so pleased, because, you know, David [Duchovny] and I had not seen it before, so we're nervous; we're hopeful that it's going to be as good as we wanted it to be, and it was. I was very happy with it.

So I'm smiling...I mean, it's like Chris [Carter] is great, and David and Gillian [Anderson] just killed it. I was thrilled the whole time I was sitting there watching it.

On improvising lines and how Chris Carter is with it

It's a trust thing. And I think Chris has always been great about taking suggestions, and I think it fit very well with Skinner, the way he talks, and his chemistry with Mulder I think is very much - and like I said [at the panel], it was a line that one of my bosses had said to me at one point, and I thought, I'm going to use that one of these days, and man was that the perfect time to do it. And as soon as I said it, I think I may have even said it in rehearsal before I even talked to Chris about it. And then I said, "Is that ok?" And he goes, "It's great; it's great." So I was happy.

On how many episodes he is in in season ten

I can't really - has Chris been here yet? Yeah, I don't know if they want me to say, sorry. 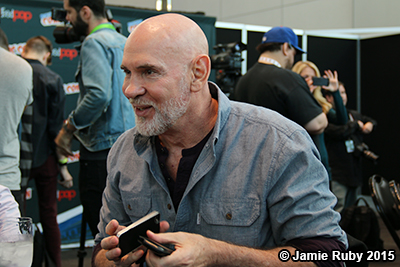 On coming back to the set to Mulder's office, and if there was a sense of déjà vu

It really was. You know, it was weird seeing the poster on the floor, and then when he kicked it and tore it, I was like [makes shocked face] going, “Woah, wait a minute, you can't do that.” But it was very cool. It was just the fact that the office was empty, and it was kind of strange, but it still had the pencils in the ceiling, so that was very cool. But it just felt really good, you know, walking through that door and interacting - standing across from David and playing these two characters.

On Skinner’s since we last saw him

He's obviously still in the FBI; he's not progressed very far, as far as he's still an assistant director. And I think that a lot of that is probably due to the fact of his relationship with Mulder and Scully over all those years, and the way things ended with them when they left the FBI. So he's probably been ostracized to a certain extent, and maybe punished, but he obviously has, and I've been meaning to talk to Chris about this, because I don't know, but who else in the FBI would open up The X-Files? And does he have the power to? He obviously has a very powerful ally some place that is helping him do what he needs to do. Because he's opened up The X-Files before, you know.

It very possibly could [be]. So as an actor I probably should know that in my mind, it should be very well cemented, but that thought is there, that he has some connection to somebody very powerful who's helping him bring about the things he needs to be done. And directing them to Ted O'Malley (Joel McHale) I think was a big part. 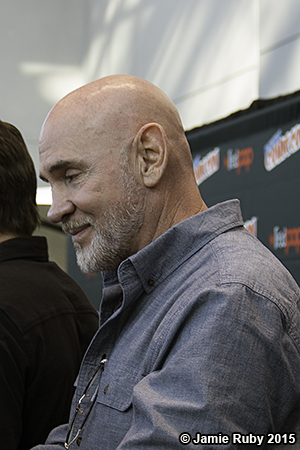 So I don’t know if it's O'Malley and the people who have the spaceship in the hanger, if there's somebody behind them that he has some connections to.

I have to tell you, maybe because it's more recent, but Sons of Anarchy. I get a lot of that.

I didn't, because in my mind I know this character, and I know who he is, and what he's about, and his relationship with Mulder and Scully. I think it's just ingrained in me after playing him for so many years.

On if he can separate himself from it, if when he watches he sees Skinner or himself

A little bit of both. It depends. Sometimes I can see that I really lost myself in Skinner; sometimes I can see that I was acting. As an actor, that’s what bothers me. There're certain characters - I did a character on Criminal Minds that's probably my favorite performance of anything I’ve done on screen, because I lost myself in the character so much, and sometimes I don't think I allowed myself to do that with Skinner. I think I could have done a better job with Skinner in a lot of episodes, but that's just me being very critical of myself.

Not any more than what you guys saw today. 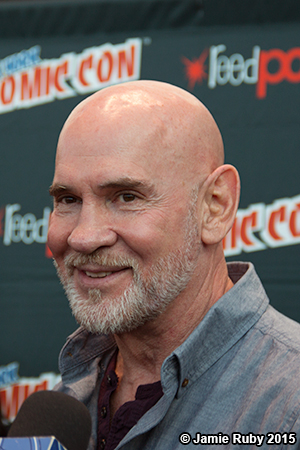 On if anything surprised him coming back or anything felt different

No, nothing, everything felt, you know, I run into - Gillian and I see each other at these things on occasion, so I've seen her a number of times over the years. I haven't seen David for a long time. So I mean, as far as seeing them, it felt normal, but as far as the character, as the show, not really. Other than the fact that Skinner no longer has hair on the top of his head; he has hair on his face.

I think it’s very valid with the way our world is, and the way the government is, and the interaction with people is just so, excuse me, but just fucked up, you know? And so I think that there’re a lot of stories to be told through this show with that stuff. I mean, it's like, we're a mess. This world is in a mess, you know, and man if I was an alien I wouldn't be coming anywhere near this [place].

The fact that he's directing Mulder and Scully to Ted O'Malley I think pretty much answers that question. He sees shit going down; he's going, "Dude, I can’t do this. You need to come back and do it." I will be here to help facilitate whatever you need to do.