Volition follows James, played by Adrian Glynn McMorran, who can see snippets of the future. When James gets a vision of events that lead to his murder, will he be able to change his own destiny? The time-bending science fiction film is now available to stream on Apple TV, Prime Video, and other digital platforms.

Star McMorran recently talked to SciFi Vision in an exclusive interview about working on the film.


SCIFI VISION: Can you talk about how you first became involved in the film?

ADRIAN GLYNN McMORRAN: It was good old-fashioned nepotism. I know the writer and directors from high school, basically. Tony Jean Smith was the cool kid in my high school, who I was scared of, but then we became friends later. And Ryan, the other writer, we've been friends for years as well. So, yeah, it was a long time coming.

What was it in particular that really drew you to the film with either the character or the script?

Even from the early stages, I was drawn to the complexity that Tony was going for. We went through a lot of different drafts and revisions, but there was always this kind of time-bending complexity, which is, you know, pretty sci-fi based. But what I liked was that the characters, and especially James, were not one dimensional. They seemed very grounded in reality, very full and down to earth characters. I like sci-fi as a genre, but I don't always like how the characters can be a bit action hero, you know, just a bit one dimensional at times. So, I really liked this mix of sci-fi and complexity with a very [multi-dimensional] character.

This film has a surprising twist with the, as you called it, "time-bending complexity," that I really enjoyed. Can you talk about your reaction when you found out about it?

What I can say, without ruining the reveal, is Tony had had iterations of this script for almost a decade, various different versions, and they all have this kind of time-bending aspect to them. So, I already knew that there was going to be something along those lines, and it just kind of continued to get refined and developed and stayed very complex, but I kind of knew what I was getting into.

Obviously with James seeing the future, you have to play those possibilities out. Can you talk about the logistics of filming the different versions of the future and kind of putting them together? It seems like it would be complicated to keep straight from an acting standpoint.

Because of the time-bending aspect, it meant that there were a lot of layers to the script. You almost never shoot a film in sequence, and we weren't filming this in sequence, so I knew it was going to be very confusing to figure out where in the story within the journey James was, especially with the kind of weird time stuff. So, I actually got very scientific, and I made myself this table chart where I charted out for every single scene where James's psychological level, you know, stress level was, on a scale of one to five, where his physical stress level was, what had just happened, and what he was trying to do. Thank God I did that, because then in the midst of this crazy fast shoot that we did, I could just like go, “Okay, we're doing this scene. This is where he’s at. Boom, let's go.” Which was very, very helpful. Yeah, that could have been very confusing. 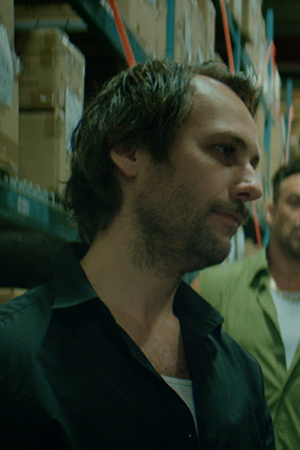 Can you talk about working with Magda Apanowicz?

I had never met Magda before. Tony had told me that he - I think they knew each other from film school, and he was just like, “She's awesome. You're going to love her.” And it was it was great.

Magda and I are very different personalities. I'm a pretty kind of closed off, hard to get to know person. Magda is very much an open book, really generous with her vulnerability and stuff. And honestly, I credit the chemistry that we were able to create very quickly to her being such a generous performer and just a generous human. We had a rapport within minutes, just like, boom, we just had a connection, and it was just great. And she's also just a very present performer. As an actress, she's never really pretending her emotions, she's living them, and every tape will be different, because she's completely present in what's happening. So, that was just awesome to work across from.

Is there anyone else you would have liked to have gotten to work with more that maybe you didn't get as many scenes with?

The whole cast is just awesome. I mean, Aleks Paunovic and I only got a couple scenes together, and a lot of them were fights and stuff. So, that was fun, but, yeah, I would definitely like a chance to work more in depth with Aleks, and the same with Frank Cassini, because we only had a couple scenes together too. I got to do a lot of juicy stuff with John Cassini and Bill [Marchant] and Magda; that was a total gift. I mean, those are some of the best actors we have in Canada.

Speaking of kind of the scenes you did, with not necessarily just with Aleks, but I think they mostly were with him, actually, [laughs] can you talk about the action and fight scenes and that kind of thing?

We didn't really have any physical prep for this movie, and we didn't have stunt performers. So, we did everything ourselves on the fly, [laughs] which was honestly really fun. I mean, I've done a lot of action-y kind of TV shows, but I usually have a stunt guy. So, this was fun to like, you know, throw myself across the motel rooms and stuff like that. But specifically, with Aleks, it helped that he is really experienced. I mean, he's actually an ex-boxer, I believe, and he's done a lot of fight choreography over the years. So, it was it was great to work with him, because he knew [a lot]. There was one point where I was supposed to knee him in the balls, and he was really worried that [laughs] I was going to miss, and I came pretty close, I have to say, one time. He was like, “That take was a little close buddy.” And so, he kind of taught me the best way to sell it so that it looks real but wasn't going to put him in, you know, immediate man danger.

[laughs] Yeah, you don't want that.

This is more of a personal question, but if you could, would you want to be able to see the future? Just in your own opinion for yourself. 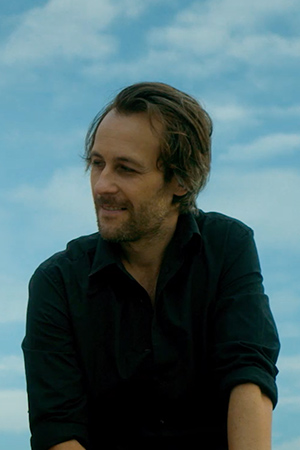 James is a clairvoyant, and he's seen snippets of his own future throughout his life. And I think one thing that was so interesting about this character, is we think of clairvoyance as being kind of like a superpower. But I thought it was really interesting in the case of James, because, you know, seeing snippets of his future, seeing that he doesn't amount to much, that he kind of ends up a loser, has made him complacent, has resigned him to this fate that he's not going to amount to anything. That was super interesting to me. It kind of made me think that, you know what? I don't think I would want to be able to see how my future unfolds, especially if there was nothing that I could do to change it. I think it's better just to make the choices you make and live for the moment.

Lastly, can you describe your character in three words?

Let me think about that. I’m trying to think if I want to describe what he starts out as or what he becomes, because he changes.

You can both if you want.