I really liked this week’s episode. It was interesting to see that Penny and Marina’s timeline jump has caused repercussions. However, although some of the timey-wimey stuff happening with them felt a little unnecessary, I enjoyed it none the less, especially both Pennys interacting with each other. Arjun Gupta was excellent in that scene and looked like he was having a lot of fun. It also serves as a good reminder that although Penny 40 may be fitting in, the original Penny has been dead. At least we got to see what he’s been up to. I’m not sure how Kady will react to his message, but I still hold hope that somehow he’ll get to see her again. With this show, you never know.

I also loved seeing Quentin standing up to the monster and it actually working. Evil Eliot is always so touchy. I do love seeing such a different side of Hale Appleman, but I’ll be happy to see him back to normal as well. I miss the real Eliot.

Of course though, as usual, the best bits go to Margo. Summer Bishil has such fantastic lines in the episode, especially during her scenes leading up to and during her dinner with Lady Pike. The different names she gave the town of Codswall was hilarious.

However, a lot of what she said to Josh was really harsh. I’ve been enjoying their banter with each other, and hope that the two of them can work through it.

I also have to take a moment to mention Camryn Manheim, who was awesome in the episode, and I hope we see more of her. I think her character could become important for Alice. Alice has been so caught up in the bad that magic is capable of that she’s forgotten all the good it can do too. 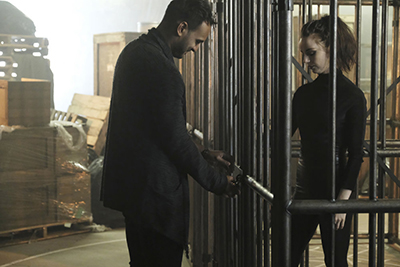 Penny and Marina wake up in cages after having been kidnapped and sold to the magician Daniel Stoppard, who is a horomancer who deals with magic involving time and dimensions. He explains to them that them being in timeline 40 is messing with his spells.

He uses his device to send them back to timeline 23. However, since there is no magic in 23, the symbol keeping Penny from traveling no longer works, and he is able to get out of the cage and knock him out.

Penny is about to leave Marina, but she claims she knows how to use the device, so he lets her out, and they activate it and leave together. However, they end up in a different world where magic has been outlawed altogether.

Meanwhile, Quentin and Julia are working on their next move. Quentin thinks that if they find all the pieces to the monster’s body, that he will leave Eliot’s, and they will get their friend back. Julia isn’t sure it’s the right move, but agrees to help. The next thing they need to do is translate the hieroglyphics from the god stones.

Meanwhile, using the world book, Alice has been sent to Modesto. She rents a room from a woman, Sheila. 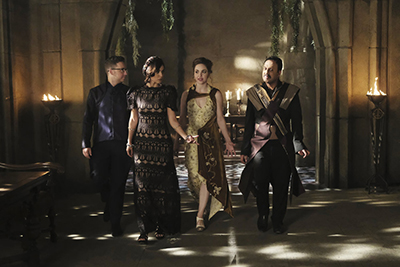 In Fillory, they realize that pollen from some flowers are what is preventing the animals from talking. They can make a cure from beets, but they need to get them from a remote isle. The ruler there, Lady Pike, who’s known to be a bitch, has already promised them to West Loria, so Margo will have to try to get her to change her mind.

Meanwhile, back in the other world, Marina suggests they talk to the Daniel in that timeline to see if he will help them.

Back in Modesto, when Sheila weirdly walks outside like she is following something, Alice follows her. Sheila digs up a box from under a rock that is filled with money. She takes it to a church and leaves it on the front steps.

Alice confronts her. She discovers that the woman only recently discovered her ability, and she believes that she must be in Modesto to help her.

Suddenly there are two librarians knocking at the door, so Alice hides. They congratulate Sheila on her newly discovered magic and try to recruit her to the library.

Alice tells her that they are only offering her a library card with magic so they can keep tabs on her. Sheila believes her and wants her to teach her, although after all the bad that has happened because of magic to Alice, she is reluctant. However, she eventually agrees.

At Daniel’s house they meet his mother Sonia, who is sick because the spells on her watches aren’t working correctly.

They realize that his mother invented horomancy, as well as the machine that lets you essentially Face Time with someone in the past.

They figure out that what Sonia’s magic runs on has been outlawed, because it causes neuro degeneration and can make your mind become “unstuck” in time. She knew it was killing her, but decided to continue anyway, making devices to counteract it. However, their arrival in the wrong timeline started disrupting them. Daniel only wants them to return to timeline 23 to save his mother. If they go back to timeline 40, she could die.

Of course Marina doesn’t care, so Penny leaves her behind. 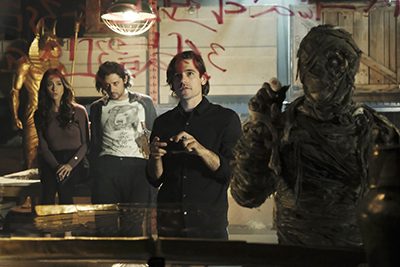 Back home, Julia and Quentin sneak into a museum to get help translating the stone/organ. The monster as Eliot shows up, drunk. He suggests that to translate the symbols, they should just ask someone who was really there, and wakes up a mummy.

The mummy helps them translate the text. It talks about the god of magic and medicine, Heka, who they know likely had a stone, but he’s already dead and his tomb has been raided. Evil Eliot tells them to figure it out and disappears again, like he does.

Meanwhile, Alice teaches Sheila some magic. Shelia tells her that the drinking water is full of lead, so she shows her how to clean it, but there isn’t enough ambient magic to give the whole town clean water. However, Sheila wants to help the town and can sense the pipes that carry magic, and one nearby has a leak.

When Penny jumps to another timeline, he shows up in a sort of way station with the original Penny. Penny 40 tells him that he has to go back to his world in timeline 40 and continue to take his place. He knows everything Penny 23 lost, but they are alive in timeline 40. That is his world now, and there is a lot at stake. He tells him that no matter what, Sonia cannot be saved. He adds to tell Kady that he loves her and is sorry.

He sends him back to Marina, and they travel back to timeline 40.

Back in Modesto, Alice widens the magic leak in the pipe.

Quentin and Julia find the monster and realize that he has been taking way too many drugs. Quentin threatens him that if he doesn’t stop taking them and ruining Eliot’s body, that he will not help him find the stones; he doesn’t care if he kills him. It actually works and he agrees. 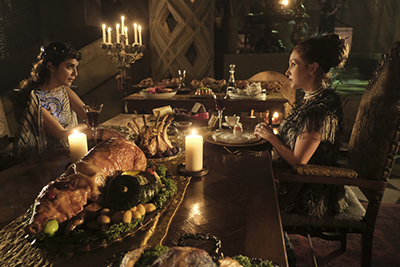 Margo meets with Lady Pike after Josh has prepared food. He coaches her on how to be nice and what to say to the queen to get on her good side.

After a conversation about alpacas, the woman says she misjudged Margo and likes her, but she already agreed to give them the beets and can’t go back on her word.

Ignoring Josh, Margo decides to threaten the woman instead, and she agrees to do what she wants.

When it works, Josh tells her that she out-Elioted Eliot, which strikes a nerve. She doesn’t want to do it without him.

Margo says a lot of cruel things to Josh who just wanted to be her friend and perhaps boyfriend. She tries to apologize, but he says he knows she meant the things she said and walks off.

Penny talks to the original Daniel and tells him that he spread dandelion seeds from the other timeline in his so that there are too many changes for him to get rid of, so it won’t help him to bother them again. He apologizes, but tells him that he has to stay, because bigger things are at play.

Back in Modesto, some hedgewitches realize that there is more magic in the air. The female uses it to blow up the local branch of the library, along with the two librarians who visited Sheila earlier.

Meanwhile, kids outside are happy playing in a burst hydrant in the street in clean water. Alice wants to stay and watch, happy that she did something good with magic. Sheila heads back home, but is stopped by Gavin and another librarian.
Twitter
BotonSocial por: SocialEmpresa
Category: TV Reviews & Recaps