It’s come to my attention that there are those who feel that this season of “Spartacus” has been too slow, too boring, and generally lacking in the kind of well-oiled mechanics that made “Blood and Sand” and “Gods of the Arena” so addictive. I believe that this episode stands as a statement to those critics, as half a season’s plot threads come crashing down, along with most of the arena in Capua.
The previous episodes were necessary to put Crixus and Oenomeus in captivity at the former House of Batiatus, and well as use Glaber’s inability to capture Spartacus as a point of contention between husband, wife, father-in-law, and political rivals. Without that context, the return of Gannicus and the daring rescue plan in the arena would have been empty spectacle. Instead, each and every moment was laced with several layers of meaning and subtext.

First, there’s the obvious, put forward right at the start: the first meeting of Gannicus and Oenomeus since Gannicus gained his freedom and Oenomeus learned of the infidelity of his wife. History tells us that these two men become allies in the rebellion, so survival was not in doubt, only how it would happen. Yet at this stage, all of that merely informs the emotional depths of the contest between former friends and brothers.

Gannicus hasn’t been seen since “Gods of the Arena”, but his presence is an immediate boost to the proceedings. The fact that he is a broken man, unable to find solace in freedom without the glories of the arena, is an interesting commentary. Just how does a man trained for armed combat to the death, a legend within the most celebrated sport of that age, deal with “retirement”? Gannicus is a man in search of a purpose and redemption, and he is about to find that path in a major way. 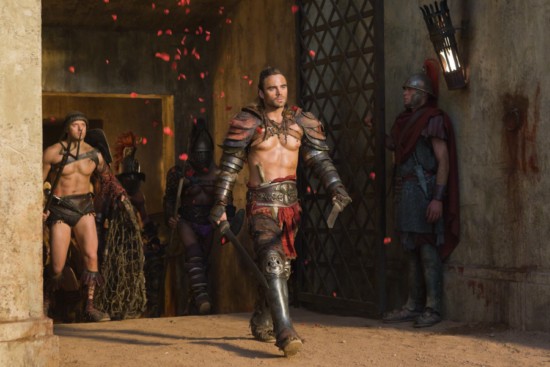 Crixus’ presence pulled Lucertia into the mix. In a nice bit of contrast with “Blood and Sand”, Lucretia is not concerned over the survival of the Gaul, but rather, eager to see him pay for his attempt on her life. That she is reminded of the child she lost by Ilithyia’s scheming only adds to the mix. Lucretia’s personal stake in his fate added to the intrigues of the Roman side of the equation.

Speaking of which, this was finally Glaber’s moment to shine, as Ilithyia fell into the same bad habits that so often led to Batiatus’ comeuppance. Granted, Lucretia used Ashur to derail Ilithyia by planting the abortive drug, but Ilithyia’s haughty declarations were begging for a reversal of fortune. Once again, without the decline of Glaber’s fortune, relative to Lavinius’ rise, this turnabout wouldn’t have been nearly as devastating. It must be remembered that Spartacus’ rebellion was seen as a crime spree for quite some time, before victories over Glaber (and eventually Livinius) would change perception.

As such, it makes sense that Glaber’s inability to capture Spartacus and end the matter would be a major stumbling block, worsening his fortunes. The incident at the arena never happened in the actual history (so far as I can tell), but it does present Glaber with a very good reason to strike back quickly, on every possible front. If nothing else, it ought to explain why Glaber gets reckless in his tactics.

With this episode representing a turning point for the season, the stakes have definitely been raised, and it’s highly doubtful that the intensity level is going to drop. Certainly there are a ton of consequences that must be explored, and there’s a fateful confrontation between Spartacus and Glaber at the foot of Mount Vesuvius waiting in the wings.