Today, the new series, which recently premiered on BBC One, Dracula, drops on Netflix. Created by Mark Gatiss and Steven Moffat, the creepy retelling of the vampire tale follows Jonathan Harker (John Heffernan) in his account of becoming a prisoner of Count Dracula (Claes Bang) after coming to work for him in Transylvania. He recounts the events to Sister Agatha (Dolly Wells) from leaving the love of his fiancé, Mina, through his escape from the vampire.

The creators have managed to set the perfect atmosphere right from the beginning. The lighting, costumes, and the sets especially help to really transport you into Victorian times. The manor is gorgeous and creates an unsettling feeling with its many dark and winding stairs and hallways. Overall everything is very foreboding, and you never know what Harker will find around the corner.

The makeup effects are also very well done, and they did a fantastic job with changing Dracula and his victims in stages. 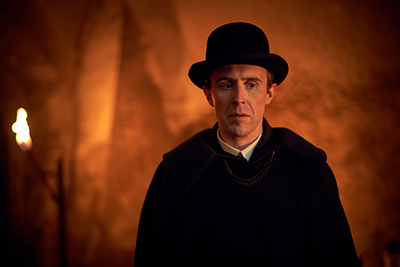 Hearing Harker’s account, the story quickly draws you in and makes you want to know more. One thing that sticks out to me that I liked is the discussion of vampire myths and why each are truth or fiction. The rules are set up right away.

The show does get quite dark at times, but it is not overly gory which I appreciated. It does, however, have some disturbing moments, especially after Harker has realized he’s not alone in the manor with Dracula.

The cast was well chosen. Harker is believable and makes an excellent protagonist to Bang’s Dracula. As the episode was from told from Harker’s point of view, it was focused more on him, and I’m excited to get to see Bang’s character more fleshed out, as we have not yet seen him play a lot of the intricacies of the character, which I know will be coming. I think the most interesting part was when we got to start to see his really dark side towards the end of the episode. 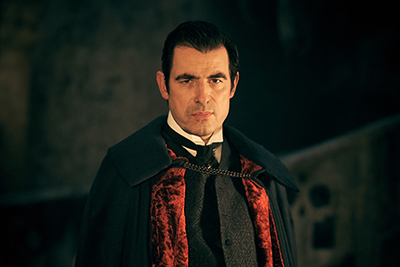 The other standout was Dolly Wells as Sister Agatha. She brought levity in a dark series. Her quips were unexpected, and it helped to keep the story flowing. I especially really enjoyed her performance in the final scenes of the episode outside the monastery.

Watching the first episode gives you an idea where the show is headed, but only a taste. I’m excited to see the other two episodes to find out what’s next.
Twitter
BotonSocial por: SocialEmpresa
Category: TV Reviews & Recaps