The Walking Dead has been about family since the pilot episode, in which Rick Grimes wakes up alone in hospital and begins to search for his wife and son. It is a show about the families we lose, we find, and we choose; it is a show about what it means to be a family. “We don’t leave them,” Lydia sobs at one point this week. “They need us.” That has always been the philosophy of this group of survivors, and it is starkly contrasted, in 11x23, with that of Pamela Milton, who is willing to sacrifice thousands of her people to a horde of walkers in order to save a privileged few.

While we see our heroes put this belief into practice during the episode, the same cannot be said of the writers for season 11. In “Family”, Connie tries to save a fellow citizen at her own risk while trapped in a shoot-out at Union Station. Lydia gets bitten and ultimately loses an arm trying to help Elijah to safety. And Judith, of course, saves Maggie and takes Pamela’s bullet herself. Being a family, this episode reminds us, means sticking together, making sacrifices, and never abandoning one another. But in its service to the plot, the universe, and the multitude of characters in the show at this point, The Walking Dead itself has left too much out, and too many people behind. 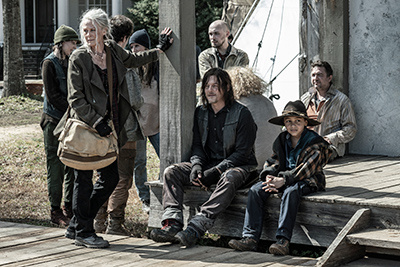 Season 10 concluded with Carol and Daryl at odds, in an argument which we have not seen resolved. Instead, we have seen them on apparently neutral terms, earlier this season, and also, more recently, navigating an unexplained tension which borders on hostility on Daryl’s part. Rosita and Father Gabriel, we learnt in an interview with Angela Kang, split up at some point, for reasons which are not (and likely never will be) clear. Negan met, fell in love with, married, and made a child with Annie. But none of these conversations, none of these moments—and they are only some of many examples—have been granted screen time. Characters and their stories are being abandoned at the wayside, and the patchiness of certain narrative arcs makes emotional investment in them increasingly difficult.

There is, again, evidence that AMC is using these final episodes to prepare for the upcoming spinoffs. Why else does Negan suggest to Maggie that the two of them take out Pamela, when the person most likely to help him on this rogue mission would surely be Carol? Why else is this episode so laden with references to Rick and Michonne? Of course, it is fitting that the series pay homage, as it concludes, to its original hero, and it is deeply satisfying for the audience to hear Judith speak of Lori, Michonne, Carl and Rick, but one cannot help feeling that the very persistence of those mentions in this episode is only because there is a spinoff waiting in the wings.

There is a beautiful blurring in 11x23 between the family into which Judith was born and the family who have helped to raise her. In the final scene, as Daryl, carrying the wounded girl, tries to escape a horde, Carol helps him, in an obvious parallel with a scene from “No Way Out” in season 6, where Michonne clears a path for Rick as he carries Carl. As Daryl flees, Judith stirs in his arms and murmurs, “Daddy?” She is speaking both to Daryl, her foster father, and Rick, her lost father, in that moment. She is, as she asserts in the opening voiceover, a Grimes. But she has also been nurtured and loved by the family that grew out of the ashes of Atlanta when the apocalypse began.

We would expect nothing less than shock and tension from the finale of a show such as The Walking Dead. But let us hope that, as next week’s episode “goes, goes, goes”, it does not leave any of its long-standing, beloved characters behind, the endings they have earned trampled beneath the feet of climbing walkers in “epic” action sequences.
Twitter
BotonSocial por: SocialEmpresa
Category: TV Reviews & Recaps