It was the third day at New York Comic-Con when I sat down in the press section of huge two-level hall. Everyone was buzzing with excitement, wondering if the tenth season of The X-Files would live up to what they loved that ended on the small screen in 2002.

Before the screening, Kumail Nanjiani took the stage, letting everyone know that the screening would be first, followed by the panel discussion and Q&A that he would be moderating with stars David Duchovny (Fox Mulder) and Mitch Pileggi (Walter Skinner), as well as creator/executive producer Chris Carter, who also wrote and directed the episode we were about to see. 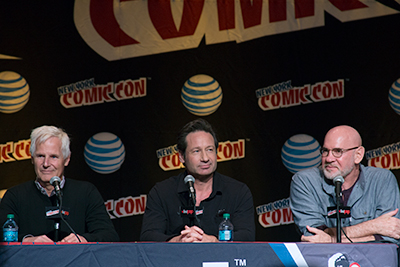 Everyone quieted when the lights turned down as they anticipated the moment they had been waiting for for over seven years.

Before the start of the episode, fans got a surprise when a funny short video came up of Gillian Anderson (Dana Scully) apologizing for not being able to be there in New York to take part.

Then it was time for the show.

It was great to watch my favorite show with such a huge crowd, hearing people cheering along with me. It's an experience I hadn't had in quite a while, and certainly not of this magnitude.

As a huge fan, I was full of enthusiasm watching the first half of the two-episode premiere, and was not let down in the slightest.

You can read my full spoiler-free review here.

*Stay tuned for highlights/a transcript of the panel, as well as exclusive photos, plus content from the press room*
Twitter
BotonSocial por: SocialEmpresa
Category: Special Events