Exclusive: Brianne Howey Talks The Passage and Embodying a Vampire

Tonight, an all-new episode of The Passage airs on FOX. In the episode viewers get to learn more about the viral, Shauna Babcock, played by Brianne Howey, and how she ended up on death row.


The actress recently talked to SciFi Vision about her work on the show, including what it’s like playing a vampire, how her character was changed from the books, and more.


SCIFI VISION:  Were you familiar with the books before getting the part? I haven’t read them, but it sounds like your character was male in the books. I’m not entirely sure. 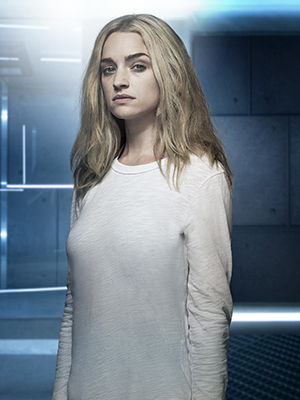 I was not. I was not familiar with them until I got the audition appointment, and then I did some research and pretty quickly after that discovered that this character was male, which definitely piqued my curiosity.  I was like, “Ooh, this project could be pretty interesting, because they’re already making pretty bold choices.”

Did you read the books after that, or just find out what you needed to know?

I did. I have read the first one. I didn’t really know what to expect, and then once I started, I couldn’t put it down. They’re so wonderful. I understand why it has such a passionate fan base, because Justin Cronin is a wonderful writer. They’re really, really good.

Great. So, can you talk about when you first became involved? You said you had to audition, how did that come about?

I got there, and, you know, I saw a bunch of other actresses who I’ve seen on some other shows. So, that’s when I sort of knew this project is pretty special. And it had Ridley Scott attached, and Matt Reeves, and people who work on a lot of high-quality projects, so the stakes felt high going into it.

I did the audition, and then you do a call back, and after a few more of those, then it’s time to test, and you narrow it down to just a few of you. Then we did some chemistry reads with the Clark Richards character (Vincent Piazza), because they knew that that relationship would be really important. And then I got [the part] and we started shooting.

Can you talk about transforming into a vampire, the practical effects and the makeup?

It’s pretty incredible. We got really, really lucky with our special effects team and our prosthetics. The first thing you do is you go to a special effects house and do an entire face mold, which is a little bit terrifying. They wrap your face in this gauze and then put the hardening liquid over it, and you have to stay in that for about twenty-five minutes. You can’t see anything, and there’re just holes in your nose to breathe. Then over the twenty minutes the mask goes from soft to incredibly hard, and that’s a little panicky. Then they take it off and they have an entire mold of your face. 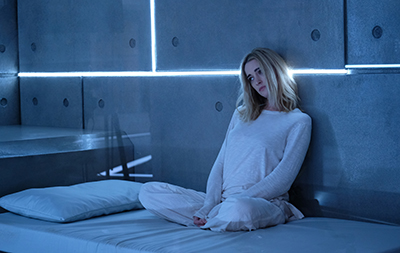 I don’t know if I could do it. The thought freaks me out, and I’m not claustrophobic.

Then we wear these cheek implants to make the characters appear more gaunt. So, that’s where they got that. Then, after, we put in the contacts, which are like the size of a quarter. It covers your entire eyeball.

Then after that, you do a teeth mold. So, we have our fangs, which are actually kind of beautiful. They’re like Invisalign a little bit; they’re pretty comfortable. The teeth and the lenses are all hand painted.

Then after that, they put on the veining, which is why it’s a little bit 3d, as you can see. After that they go in and hand paint more veins on top of that.

The whole thing is about two-and-a-half, three hours.

Most of what we have seen of your character as a vampire so far has been in the cell. Can you talk about embodying her as a viral? Did you work on moving a certain way or that kind of thing when you were creating the character?

It was really important, because the virals don’t have a voice; we aren’t able to communicate. It was pretty much all physicality. I had remembered doing animal exercises in college in my acting classes. It was something that I never necessarily thought would ever come in handy, and lo and behold, now working on this, it has very much come in handy. 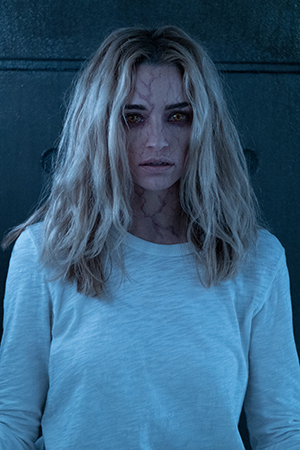 Shauna’s life as a human was really chaotic and anxiety-ridden, and she’s had to use her survival skills at all times. So, as a viral it was fun to just completely contrast that and find her stillness and her peace and kind of play with immortality a little bit.  So, thinking of cat-like motions, because they are still and alert and ready, helped ground Viral Shauna for me.

Can you talk a bit about filming the bite in the second episode?

[laughs] That poor guy, Alex [Morf] was amazing. We did that over and over and over again. I had a great time; it was so much fun. It was just getting a lot of the choreography down and the timing right between his look and my step forward. It was a little bit of a dance.

Is there anything you can tease about the virals’ plan? Are they just trying to escape? I assume there’s more to it than that.

I mean, of course. So, a lot of this comes up in episode three, which is really fun. There’s so much discovery. You start to see how when each new viral is added to Project NOAH, it affects all the other virals, and you sort of start to see what that means.

As you can imagine, this wasn’t what they were told was going to happen to them, so yeah, they want out. They were all lied to.

In episode three, Shauna shows Clark Richards what really happened and why she killed her parents. And we can see it affects him, because of what happens in the episode, but I feel like it’s not just a moment of him feeling for her. Is that going to continue to affect their relationship throughout the season? Is it going to cause other things to happen?

Absolutely, yes. The Shauna/Clark Richards storyline goes all the way through to the finale. I worked with Vince the most throughout the season, and their relationship kind of has this incredible arc. What he doesn’t realize is how impressionable Shauna is and what his actions mean to her.

Building on that, and this is partially your interpretation, but I’m not sure if Shauna was hardened after prison, or if it was after she became a vampire, that some of those emotions were turned off. I’m not sure if it’s the vampirism or she was already that way when she got to Project NOAH. Can you talk about how she was changed by what happened to her and also the dichotomy of playing the different sides of her? 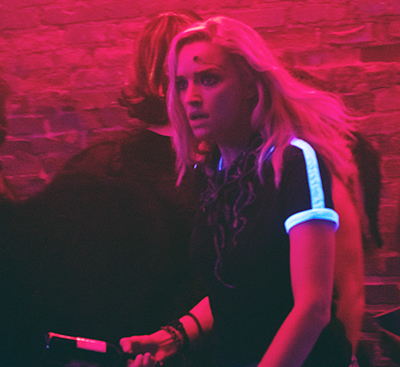 How Shauna was changed when she arrived at Project NOAH?

I’m not sure if she lost her emotions as a vampire or if she was already changed from being in prison.

It’s a great question, and it’s a super-loaded question, because Shauna murdering her parents is a split-second decision. It wasn’t premeditated, and that’s a decision that continues to haunt her for the rest of her life. That’s just something that she has to live with.

I think from her point of view, acting on that instinct was still a better life than the life she was living before, given the unfortunate set of circumstances that she had to endure.

I think what she discovers in episode three about her family is the real betrayal, and I think that’s probably when the changes started, when she started to get a little bit more hardened – not to mention everything she went through growing up.  And then of course, you go to women’s prison in Nevada for a few years, and all bets are off.  It’s just Shauna’s had to be a fighter her entire life; she’s just constantly had to exercise her survival skills. So, she had to do it while growing up, she did it in prison, and then of course when she gets to Project NOAH, all over again.

I wasn’t sure if when they turn vampire they don’t care anymore. So, she’s still affected by that; she isn’t just like, now her previous life doesn’t matter?

Well, once you get injected, it takes twenty eight days to turn. So, you can kind of see when you first get the injection – and it’s the same with Carter (McKinley Belcher III)’s character – you feel amazing. You feel great; you look great. Your senses are heightened; you feel wiser. It’s a little bit of a miracle cure, at first. 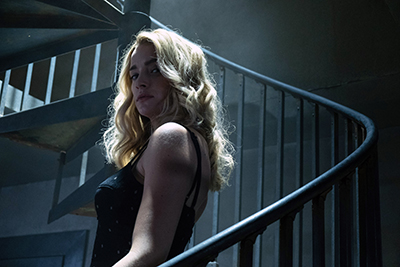 Then it turns, and there’s the vomiting, the sensitivity to sunlight; obviously your teeth start falling out. Then they do start to lose some of their emotions, but then that changes again as each new person turns into a viral at Project NOAH. It affects the whole group.


Be sure to tune into The Passage, tonight on FOX.
Twitter
BotonSocial por: SocialEmpresa
Category: Interviews