Tomorrow, FOX will air the two-part season finale of its hit show, The Passage, based on the series of novels by Justin Cronin. After Amy (Saniyya Sidney) has turned, she must make a difficult choice that could destroy everyone she cares about. Meanwhile Clark Richards, played by Vincent Piazza, must make a choice of his own that could change everything.

Piazza recently talked to SciFi Vision in an exclusive interview about his work on the show, his character’s relationship with Shauna Babcock (Brianne Howie), what’s to come in the season one finale, and more.

SCIFI VISION: Did you read any of the books before or after you got the part? 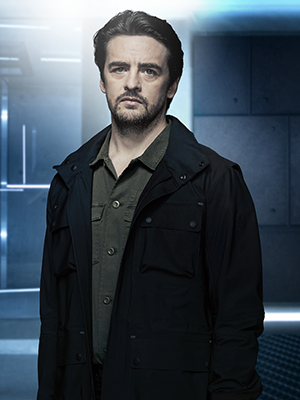 VINCENT PIAZZA: No, I hadn’t read the books, and that was a conscious choice, because I wanted to just kind of have a little more freedom. I had come off some projects where I was playing historical figures, and I always felt like I was serving two masters. So, this was a moment where I had a sense of what they were doing with the first season, and that would be a good opportunity for me to use my imagination with it, and should we go further, then I could look into the books. But that said, he is based on a character in the book, and he is doing exactly what he is doing on the show at this point in time.

Other than the script then, was there anywhere else you took inspiration from when creating your version of the character?

Yeah, I read a lot of military books, because I wanted to understand that mindset a little bit better, which helps me dig into the character’s objectives. If you’re at a job, it’s not just a job in, you know, the private sector. He might be a black water consultant or one of these murky titles, but he still has that DNA. So, I really wanted to take the time. So, it was really just about understanding the military mindset. I spend a lot of my time doing that.

And then [I wanted to] see what I had in common with the character in terms of any kind of relationships that exist on the show. So, I tried to dial into the Brad (Mark-Paul Gosselaar) relationship and, you know, kind of being a brother, but also being a pupil to someone and just trying to get as specific as I could about that relationship.

Speaking of the military, did you receive any special training for the role?

Yeah, we did some gun stuff. And, Mark-Paul, in fairness, he’s really the guy who did a lot of gun training in his life, so he was incredibly generous with his time with me. You know, we were living out the relationship in some ways, I guess, because in the show, the history is that he taught me pretty much everything I know. And I’m going to have to give him the same credit for gun stuff, because he was helping me quite a bit with, you know, loading, reloading, taking aim, stance, all that stuff. It was very helpful.

Why do you think it took so long for Clark to do the right thing? I know part of it was following his training, and the project comes first, but can you talk to that on a personal level?

Yeah, actually, I thought a lot about that. Whenever you play a character that fails, you want to understand why they failed, because if they’re good at what they do, which he’s written that way, then why would he fail? Is it training to some degree? But I also had to think of pride, ego, you know, baggage; a lot was said about who his father was, being a judge. Imagine having that kind of pressure hoisted upon your psyche. You can imagine how rough that could be.

So, for me, there was a lot of understanding, like he wasn’t able to swallow his pride and pack up his tent. I guess his ambitions were greater than project NOAH, so failing at NOAH would stymie any other ambitions. 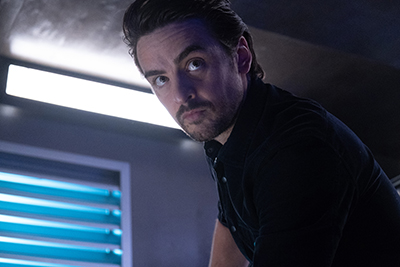 So, I think a lot of it was his inability to admit defeat, which on some levels is a very admirable thing, but you also have to be aware enough to go, “No, this isn’t one worth fighting; it’s time to step away,” and he just didn’t have that.

But Wolgast (Gosselaar) did, which is great, and Clark at least has the humanity to have a relationship with someone still, that he can at least be reasoned with and talked to. So, it’s a great character to play. I feel lucky.

Can you talk about working with Brianne?

It’s fun to show up to work, you know, to have someone who hits the ball back. I mean a lot of this stuff is in the “mindscape,” so, to be able to explore, you know, what is permissible and what isn’t, and where you can go with it and where you can’t, that was always a lot of fun to work on in terms of that relationship. So, yeah hopefully they’ll be a bunch more in the seasons ahead. We’ll see.

Obviously the virals got in everyone’s heads to some extent, but what do you think it was in particular that made Clark susceptible to Shauna’s influence?

Well, I think when you’re thinking of Project NOAH as an assembly line of bringing in death row inmates, and then suddenly, you know, you’re bringing in these hardened criminals, and then suddenly a young woman comes in, I imagine that started his curiosity. And as he got to know her a little bit better, I think he may have found something kin in her, in the sense that they’re both from, as we’ve learned, in I guess it was episode eight, that they’re both from an abusive household. So, I think there’s something that they see in each other at least, and there’s obviously an attraction and a curiosity.

Can you tease how his relationship with Shauna is altered in the finale?

That’s a tough one to answer...I think the only thing I can leave you with, is just to be careful what you wish for. In some ways you can cure human illness and live forever, but the problems that come with human interactions, relationships, emotional troubles, you know, there’s no cure for that. So, it leaves a very wide-open door to see how people or virals interact going forward without a cure for that.

Without spoiling anything, can you talk about the important decision he makes and how that affects him for the rest of the finale? 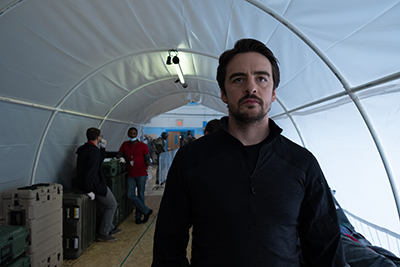 Well, it’s hard to think of this character at this point not pursuing a good end. Like I think he’s always in pursuit of solving a problem and figuring out a way to win. So, his [goal,] as we go forward towards the end, I think it very much is, how do I find a way to get ahead of this?

How long did you know what was going to happen to him in the finale?

[laughs] Pretty much a few days before we shot that.

[laughs] Yeah. I didn’t quite know how it was all going to shake out, so getting the script was like, “Whoa, all right.”

You know, it was fun, because each week we get these scripts, and when you have such a strong pilot script, the fear is like, all right, well, I have an outline of where they intend to go with the show, but you don’t quite know week to week how they’re going to accumulate.

But what I really appreciated, is the consistency of building plot, building tension, building character, and how they were able to successfully balance that week in and week out. That never felt like, you know, you made a weird left turn or a weird right turn. Everything has been paying off, and there really hasn’t been anything arbitrary in the script. It’s been just some great work from the writers.

Obviously, you can’t tell me what is going to happen if you do, but do you have an idea where the show is heading next season? I mean, where do they go from there?

Well, that’s the great question. I mean, I can’t really say too much about it, but it’s a battle of life versus death, and let’s see who picks which side, and how does the world cope? You know, those are the big questions that I think have to kind of feed our curiosity.

You know, it’s why I love network or traditional television structure. For me, a show isn’t made while you watch it; it’s made in the weeks in between when you speculate about what’s happening. I just love when you’re able to be left with something that allows you to think and be curious and hopefully come back for more. 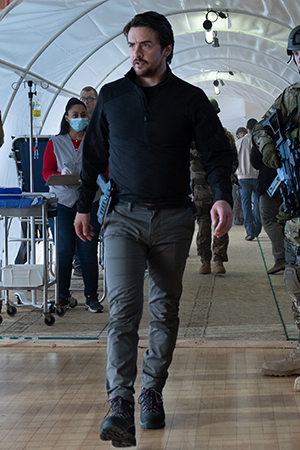 I know it does make a lot of a difference when you watch shows a week at a time like that compared to binging.

With bingeable television, I find myself sometimes crestfallen. Like my fiancé and I will watch a whole season of a show, knowing that the week to week we didn’t have to suffer alongside of everyone else, but that suffering’s great. Like right now we’re waiting for another show to come back on, and we still kind of wake up and have coffee and talk about what we think is going to happen. So, I don’t know; it’s kind of fun. To me binging steals the power of storytelling.

But I’m so happy you’re into this one, and I hope we get a second season to answer at least some of those questions and hopefully leave you with a bunch more.

Before you go, can you describe your character in three words?

That’s a tough one. Committed, I would say, stubborn [laughs], which I guess is in the family, and I don’t know, I guess intelligent. I think those are the three.
Twitter
BotonSocial por: SocialEmpresa
Category: Interviews