Tonight, the newest episode of Deadly Class , based on the comic series by Rick Remender and Wesley Craig, will premiere on Syfy. In the episode, wanting to get to Chester (Tom Stevens), the group plans to raid Shabnam (Isaiah Lehtinen)’s house.

Liam James, who plays the character of Billy, recently talked to SciFi Vision in an exclusive interview about working on the show, Billy’s relationship with Petra (Taylor Hickson), and more.

SCIFI VISION: Had you read the comics for the show either before or after you got the part? 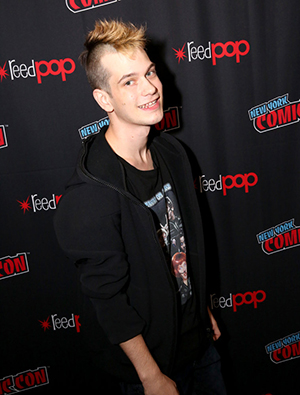 Other than the comics and scripts, is there anywhere else you took inspiration from when creating the character?

Well, I think, for me, it was very interesting, because this is the first project I’ve ever gotten where there was a real source material to work with for the character. My go-to is usually my own kind of world and my own thoughts and feelings for the character, but this was something that was so different from anything I had ever done before. So, I didn’t know what to expect or if it was going to go the right way.

So, I actually tried to lean into what the comics had to give me, because they’re so good, and the characters are so well done that I tried to kind of meld what I saw in the comics with what I had in my repertoire.

And once I got on set, the creatives were so incredible that they just kept giving me really great ideas.

Then I had the mohawk, and as soon as I got the mohawk - you know there’re people who say once you put your costume on, that’s when you feel the character? Well I was [laughs] never allowed to take that part of the costume off, and that was one of the most important parts.

Also for a lot of the inspiration too, I was so lucky to work with Rick Remender, who is the creator of the comics, and who a lot of the characters, Billy being one of them, is based off of. So, his sense of humor and his disposition was something that I tried to really bring into the character, and then just bring myself.

I’m super lucky that I have the coolest, most fun, sweetest cast mates ever. A lot of times we just go to set, and we just have fun. This whole world we know was built for us, and we just get to play in it every day. 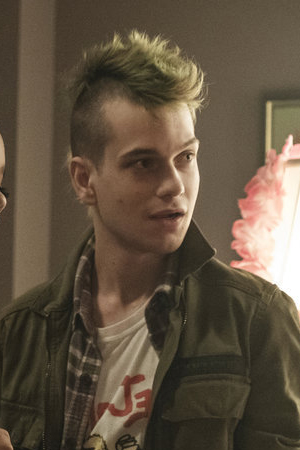 All the characters though have very dark pasts, and the show can get quite dark. How do you connect to that part of him and the show?

I think, for me, a big part of that is having empathy, which I think is really important to this job as an actor and trying to put yourself in someone else’s shoes and to have compassion for that person. For me, Billy was always easy to do that for, because I think he’s such a great character and a thoughtful character and a good person, but he’s also a very funny person.

So, for me, I think I got really, really lucky. I didn’t just have to try to create this all in my head. All of a sudden, I had the comics there, and I cared about these characters the way that you do any character that is beautifully created. So, I just got lucky that it was such great source material.

And I started to have dreams about the world, and it’s such a complete world, and all of a sudden, your imagination just runs away with what you’ve been given. So, just having compassion for the story is important, I think. If you don’t care about the story, then I think it becomes very difficult.

Can you talk about filming the scene in Vegas where Marcus (Benjamin Wadsworth) helps Billy kill his father?

The world is just so beautifully put together that it was really like being on this crazy kind of acid trip in Vegas. You’re walking down these hallways where there’s red velvet carpets, and everything feels close and claustrophobic and then super grand and super huge. We just kind of really got into that world.

So, for me, that scene was very intense, and it was very important to me that it went well, because it’s such a big part of what the show and the comics are about. That trip to Vegas is a very special episode, so it was a trip. [laughs] It was such a crazy time, and we just went full force at it. 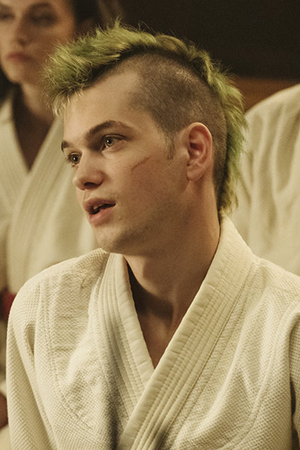 We had such a great director, Adam Kane, who’s done several of the episodes and is going to be shooting our finale. So, that’s definitely one to watch out for, because he just wants to dig deep into that world and make it feel like you really are going on a crazy trip.

It definitely worked in that episode [laughs].

Can you talk about Billy’s friendship with Petra and how what happened in the recent episode – or I should say what didn’t happen [laughs] - will affect Billy and also his relationships with Petra and Lex (Jack Gillett) moving forward?

I mean, I think when you’re at the age, the funny part of the comedy of it and, you know, the comedy of life, is that you’re just so impulsive. You do these crazy things, and you have no idea until like years later why you did it and how it affected you [laughs].

And so, I think at this point, the interesting thing is, and it may not seem like it at times, because tensions are so high, but those are two of his very best friends in the whole world. So, I think the one thing that’s kind of special and cool about it, is that at the end of the day, they’re all friends. So, it might put some strain on their relationship, but I think that’s better than if they didn’t know each other and then all of a sudden had to see each other at school and all these things. You know, I don’t know. [laughs] Is it better or worse? It’s a tough question.

But I think one cool thing that happens in that scene, is we get to see a whole other side of Lex, and that’s really, really powerful. I think it helps you and the audience to kind of see, oh this guy isn’t just this. And it’s so crazy, because we know that everybody has these dimensions to them, but until it’s spelled out there right in front of you and kind of manifested, you don’t see it. So, that’s something that’s really interesting.

And I think to me, to Billy, Petra is still, you know, the girl of his dreams who he just doesn’t understand, because she plays her cards so close to her chest, and he’s constantly just [laughs] trying to understand her.

Is there anything you can tease that’s coming with Billy and Petra in terms of relationship? I think they'd make a cute couple. I'd like to see that; I think a lot of fans would. 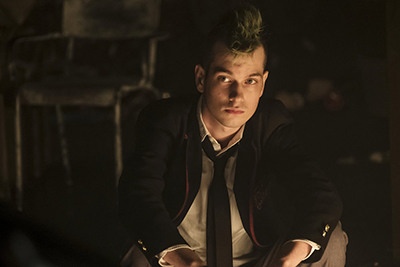 [laughs] You know, I am kind of in the same boat. The thing about the writing of Deadly Class, is that you never know if you’re going to get what [you want] You know, you always hope you’re going to get what you want, and every time I’m going to the writers being like, “This is going to happen, right?” Because the writing is so good, you get so invested, where it almost feels like, you know, you are the character. And you’re like, “but me and Petra right?” You’re not thinking about Billy and Petra. You get so invested into the character; you know, there’s jealousy and love and all these things for these characters, even though they’re not real people. [laughs] I hope so; I’ll say that. They would be the perfect couple, but we’ll see what happens.

Can you talk about filming the scene with Taylor and Jack? Was it awkward at all?

[laughs] Well you’d think so – I’m sure maybe if you ask Taylor or Jack, they would have possibly different answers, but I didn’t think it was awkward at all. [laughs] If anyone was awkward, it was probably me, but it was probably awkward in the way that, you know, I was actually just really excited, because we were in the thick of it working crazy hours. I think we shot that scene at the very end of the episode, so we were probably seven days into the shoot, and everyone was delirious.

So, I just started running around the studio in my underwear dancing and going crazy. [laughs] I think I was just in one of those delirious, manic states. So, I had a ton of fun, but people had to kind of try to calm me down a few times, but we just had a blast really. 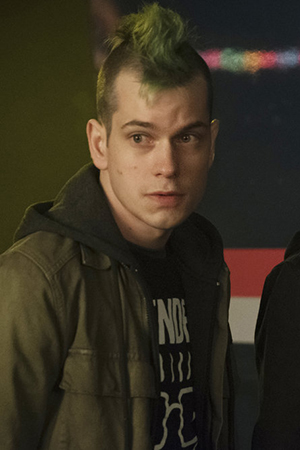 I think Taylor and Jack are two of the coolest, special people who are able to flip simultaneously between sincerity and just laughing. They get the world of Deadly Class more than most people. They kind of really fit that vibe in their own personalities.

Can you describe Billy in three words?

[laughs] I wish I had it here, because we had a year book that they made for us. We keep getting the coolest stuff from Syfy. It had the three things for what the character is like, but I think Billy is boisterous. Let’s see if we can stick with the B’s. Boisterous…balls, because he likes to say the word balls a lot, [laughs]… He’s also just a guy who I think really has a lot of secrets, but he doesn’t want to have those secrets. He’s constantly trying to shed himself of that in any way, whether it’s through his physicality, his mannerisms, whatever it is, he’s trying to just be okay, and that’s a very interesting thing to get to play in a world that is not okay.