NOS4A2, based on the novel of the same name by Joe Hill, follows Vic McQueen (Ashleigh Cummings), who discovers she is what's called a "creative" and has a supernatural power that allows her to create a bridge to find lost things. She is not the only one with abilities, however. Enter Charlie Manx (Zachary Quinto), who feeds off the souls of children. As such, he kidnaps children to take to "Christmasland," a place created from his imagination. It's up to Vic and fellow creative Maggie (Jahkara Smith) to stop him and rescue the children.

Virginia Kull stars as Vic's working-class mother, Linda, who is determined to keep her family together and Vic safe.

Kull recently talked to SciFi Vision in an exclusive interview about working on the show, the potential for a second season, and more.


SCIFI VISION: Can you talk about how you started working on the show? 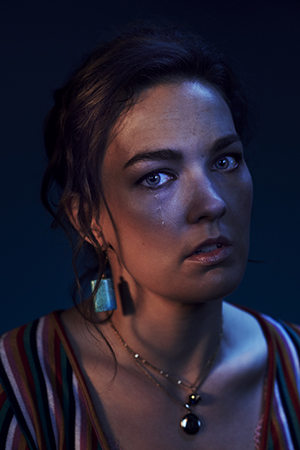 VIRGINIA KULL: Any job typically starts in the same way, where your agents send you the script and the information about the project. I guess that happened around late spring, early summer of 2018. I read the script and was fascinated and intrigued by the world of the story and really into, terrified of, and delighted and excited to be playing Linda.

Ebon Moss-Bachrach had already been cast, and I have been a huge fan of his for years, so immediately it jumped to the top of my list of things that I really wanted to go after or pursue.

I got cast shortly after that, and we started shooting in the fall of 2018.

Did you know about the book then, and had you read it then or since?

I had not heard of the book at that point. I knew of Joe Hill; I had just come off of a few episodes of a series called Mr. Mercedes, which is of course based on Stephen King’s trilogy, and so I was into that world at the time, and I knew. I’d heard of Locke & Key, and I was familiar with who Joe Hill was, but it wasn’t until I had the audition and I read Jami (O'Brien)’s pilot that I thought, “I need to pick up this novel, and I need to read it for myself,” because it’s like Christmasland and Charlie Manx and magic Scrabble bags and ‘what the hell is going on?’ This is fascinating and terrifying and really damn fun.”

So, I picked it up, and I read it in a whirlwind over a weekend and was completely hooked ever since.

Your character has had a hard life. How do you get into that headspace? Where do you go to, how do you get there and back?

I’m afraid the answer is kind of boring: the writing. Joe created the world. Joe dreamt up this character Linda McQueen, and then Jami took what Joe made and just brought it to life on screen. The words, the text themselves, have so much in them, and then to have an acting partner like Ebon Moss-Bachrach or like Ashleigh Cummings to play opposite, the job, honestly, is done in my mind.

It also helps that Jami O’Brien, our showrunner and executive producer, is from that area of Massachusetts, so she understands the world very, very well. She has a deep affection for it, a great understanding of it. She was an immense resource for me. I probably annoyed her to the extent that I was asking her questions.

Also, I think just being on the ground in New England helped. We were shooting in Providence, Rhode Island; half of our sets you’d have to drive into Massachusetts to get around the water to get back into Rhode Island. I’m from Texas; you drive ten hours and you’re still in the same state; you drive fifteen minutes in Rhode Island and you’re in Massachusetts. So, I think just being on the ground and living there for six months and being part of the community, eating crab and lobster at the local bars and dive places [helped]. And our entire crew was local, so the voices and the dialects and the history that they have in that area of the country really enriched the prep work that I was able to do for Linda. I just stole from everybody I came into contact with. [laughs] 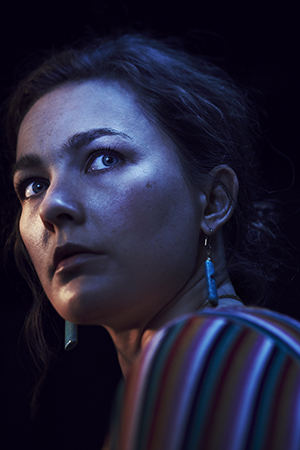 That kind of answers my next question. Other than the book and the script, was there anywhere else from which you took inspiration? How about from other characters, is there anybody you thought about as you were building her?

A lot of just spending a lot of time out and about in New England and people-watching helped a lot. Again, I questioned Jami left and right.

I also have a friend, who will remain nameless, who is raising her teenage son with her ex-husband, and she always talks about some resentment she feels, because her ex-husband is the favorite parent, because he’s the playmate, and he’s the hero, and he’s the fun one. She has been forced and relegated into this role of caretaker, disciplinarian, and person who keeps the world from ending and a roof over everyone’s head. And I think she’s worked her ass off in a completely thankless role, and I have the utmost respect, particularly for mothers who find themselves in that position. So, watching her have to weather that, watching her navigate that with such grace and bravery and getting zero thanks was a big inspiration for me.

I have never known anyone thankfully in that situation, but it was still really emotional for me. I think there will be a lot people who will connect with that.

I hope so. I was really moved by it when I read Joe’s book, the complicated feelings of hating how a character is behaving but feeling such immense pity or compassion or even understanding for where they’re coming from, even if you don’t agree with them.

Do you have a favorite scene that you want to talk about?

One of my favorite scenes to play that our audience has seen at this point is in either the first or second episode, and it was one of the first scenes we shot in the whole series. It’s where Linda shows up on the lawn of the homewrecker girlfriend (Jamie Neumann) that Chris (Moss-Bachrach) has left her for. I’m pretty sure it was the first scene that Ebon and I shot together, and I was excited and terrified and nervous, because I have been a fan of his for so long.

Jamie Neumann and I worked together on Looming Tower, and I adore that woman, so I knew she’d be game,

And the whole night was so much fun. It was electric; the energy was through the roof.

Kari Skogland, our genius director, gave us permission to be messy and not worry about where the camera was. She just wanted us to feel completely free to play the scene, and she said, “Don’t worry; trust us. We’ll get it; we’ll capture it. You just do what you need to do to tell the story.” To be given permission to be that free as an actor is always really exhilarating.

Can you talk about working with Ashleigh? 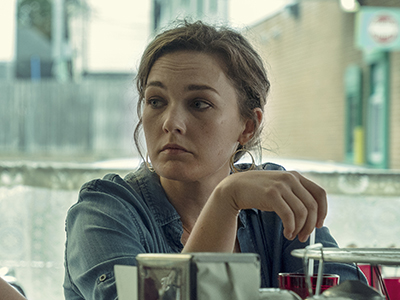 Oh, I adore her. I adore her on and off screen. She is the most prepared young actor I have ever worked with. She worked so hard. Look, technically, it’s her series; it’s her show. She had more hours on the clock than any of us did. If I had been in her shoes, I would have gone home, and I would have passed out and not gotten up until it was time to be at set again. That woman went home and journaled and read and made notes and worked on her lines. She would come to set with her scripts full of notation and thought. The amount of preparation she put into this part is extraordinary, and it makes me want to lay down and take a nap, [laughs] but it also lit a fire under all of us, because we thought, “Well, if this girl is showing up this ready to go, then I better not drop the ball here.”

So, she set a very high standard for preparedness, but she was also very kind, really thoughtful, so emotionally available, and so unafraid of vulnerability, and I think that’s remarkable in a young actor.

Did you have a particular part that you found the most challenging?

I think, for me, Linda’s loneliness and Linda’s isolation was really painful, and sometimes those feelings would linger when I would leave set for the night, because there’s a lot of scenes I have to play where I don’t feel satisfied at the end of them. I don’t get what I want; I feel like I lost, because she has. So, when they say, “Great! Beautiful scene; that’s perfect,” I still have the emotion or the feeling as Linda where my heart’s just been broken, or I’ve just been wronged in some horrible way, and I have to drive home to my apartment still coming down from those feelings. So, I would say her loneliness was painful. It was painful to spend time there.

Is there the potential for a second season or was this supposed to be one and done? Because it seems like it could go either way.

The actors never know. I think that the world that Joe dreamed up and Jami has adapted to the screen is so rich and so fun and limitless in what they can portray that I think it would be a shame not to spend a little bit more time in that world of strong creatives. I think it would be really fun to see it keep going, but I also think what we’ve created in this one season is really special too.

So, I think it really depends on you guys, the watchers. If you demand it, if you want it, then I’m happy to oblige. 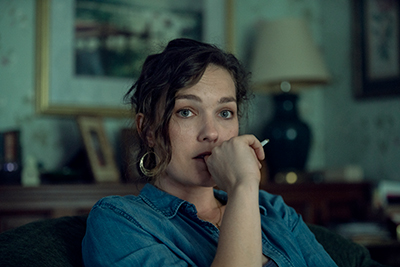 I got the feeling from watching the show that it seemed like things were maybe not taking place in the present. I got the feeling it was taking place in the late 80s, maybe early 90s, just by some of the characters' appearances and props. And then I looked up the book and realized, not that it has to be like the book, but the book takes place at multiple points in time. Is it possible the show takes place in the past and is going to go forward to the present if there is another season, or is it supposed to be now, and it's going to go forward to the future? Or am I just reading too much into it? Or can you not tell me that?

I don’t know if I can answer that question, to be quite honest, but I have to applaud your detective work. I have to say, you’re the only person that’s picked up on that, and I do think there’s something to it, but I don’t think I can go into detail.

I will say, it’s not giving anything away to say in the book Joe wrote, you meet Vic when she’s eight years old, and you see her through her adolescence well into her adulthood. So, there are some great decades to play with and explore in that story.

Can you give me three words to describe Linda, in your own opinion?