Misha Collins stars as an angel named Castiel on the hit CW series, Supernatural, which is currently airing its fifteenth and final season.

Besides acting on the popular show, Collins recently released a cookbook with his wife, Vicki, The Adventurous Eaters Club. The cookbook follows their adventures with getting their children to eat healthy foods without the drama. One hundred percent of the author profits will be donated to non-profit organizations.

Collins recently talked to SciFi Vision in an exclusive interview about his work on the show and collaborating on the cookbook with his family. 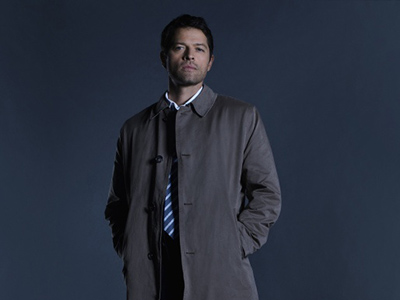 Which was more fun, playing Castiel or your brief time playing Lucifer?

That’s a tough question. On one hand, Cas is a bit of a stick-in-the-mud. On the other hand, Lucifer is the actual devil, so “fun” isn’t a word that springs to mind for either of them. So, I’m going to be annoyingly diplomatic and say they both have been rewarding in different ways. Trying to do justice to Mark Pellegrino’s performance was definitely a challenge as an actor, while Cas has been through so much, and it’s been great to experience his journey.

After 15 years, how does it feel for it finally to be the last season?

Exhausting. I’ve only been on the show for eleven years, so you’d think they’d let us coast through our senior year. Instead, we’re working harder than we ever have, but we have the added bonus of lots of goodbyes, so every day on set we cry a lot more than we ever have.

Is there anything you hope to take from the set other than the trench coat?

There are a lot of things that I’m sure will mysteriously disappear from set in the final days of the show, but of course I won’t have anything to do with that. In fact, I set up this interview to establish my airtight alibi...

What’s one thing you wish the show would do before it ended?

Live televised musicals are all the rage, so I’d love to see us tackle “Supernatural: Live!” I also wouldn’t be opposed to a Baywatch-send up.

Now that Castiel has left Sam and Dean, where do you think he’s going to go? Does have a home to go to?

We just shot episode nine, so I know exactly where he goes, but I’m not telling you.

Are we going to get at least one Castiel centric episode in this final season?

Good question. I’m not going to tell you that, either. This interview is satisfying and
revealing, isn’t it?

Is there anything you can tease about what’s coming up on the show? 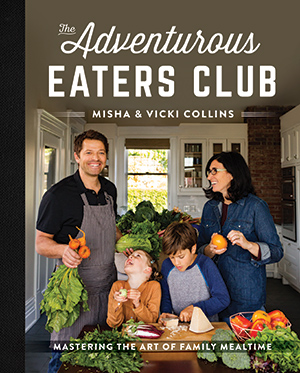 In typical Supernatural fashion, there will be a lot of bright, happy moments, with lots of laughs. I suspect we’ll be bringing each other flowers soon.

Let’s move on to the book. What was the most challenging part of putting a book like this together?

The entire process was a lot more work than we had anticipated, but the most challenging part was trying to decide which recipes should make the cut and which should never be unleashed on an unsuspecting public.

For long time fans, it’s clear that Adventurous Eaters Club is a natural evolution of the early videos of Cooking Fast & Fresh with West. Did you ever imagine back then that you would someday be publishing a book incorporating their adventures?

I did. Cooking Fast & Fresh with West was a lark, but I from the moment he first brought home a Jerusalem artichoke and showed us how to cook it, I knew the wheels were in motion. From here, it’s an easy step to our eventual coup of Martha Stewart’s empire, and I’m sure one day we’ll overtake her place as cookbook authors.

What is your favorite part of cooking with your family? Do you use it as quality time with them?

I love cooking, and I love cooking with them even more. It gives me tremendous joy to see them discover new flavor combinations that aren’t actually disgusting or to see a burst of creative inspiration and curiosity from the kids. I’m also warmed by the idea that we’re building a sense of home and connection through food for my kids, the same as my own mother did for me and my brother.

What inspired you to write a book like this?

When our kids were little, like a lot of parents, we were falling into patterns of convenience just to get food of any kind into them. Meals were a power struggle, and we were exhausted and felt defeated as we fed them the greatest hits of bland and beige. We wanted to find a better solution and discovered if we made mealtime and the kitchen a place to be creative and play, it was a game-changer for our entire family. We wanted to share what we learned and help other parents flip the script for their kids too and then use that to help get access to healthy food to underserved children.

Was everyone in the family on board with making the cookbook from the beginning, or did it take some convincing?

Everyone was pretty much on board with the invention and writing process, as those are things we do naturally in our family, so those are ways we play together. Finding time to make it happen was where we had some difficulties.

How was it collaborating with your wife and children on the book, and are there plans to do it again?

It was great. I recommend it to every family as a bonding experience. Being able to fight at 11 pm about whether or not publishing “breakfast popsicles” counts as a crime against the public, when you have a deadline, is a really satisfying experience. I won. But then, the publisher overruled me. So, she won in the end.

Did your kids ever make crazy food combinations that turned out surprisingly well?
Yes, all the time. Egg watermelon pizza is not one of them, and I think you can tell I’m not a big fan of breakfast popsicles, but salad popsicles were surprisingly tasty.

I don’t really believe in “guilty pleasures.” I think every pleasure should be guilt-free, but choosing mostly healthy food is a good idea, so when you want to have something that’s not great for you, you can do so without even a specter of guilt.

How did the editing process go? Was there a recipe that you decided to leave out of the book and why?

There were several, but the one most debated was “breakfast popsicles.” I wanted to make sure it never saw the light of day; Vicki thought it was a good example of how parents can show openness to their kids’ culinary curiosities. The publisher agreed with me initially but then ultimately sided with Vicki, so the blame rests at their feet.

I have a strong stomach and an open palate, but there are definitely flavor combinations I would have thought are disgusting that turn out to surprise me. Cinnamon “fried” chicken is one that took me by surprise, and I don’t know why we haven’t done that before. It’s delicious.

Does this book apply to finicky teens and adults as well?

Absolutely. It’s geared toward kids and parents, but the tips in it can be adapted to help any picky eater change their relationship with healthy food and become a food adventurer.

How long did it take you to come up with the recipes?

We’ve been collecting these recipes for years. All of the recipes are designed to involve kids in the kitchen. Some are designed to help kids tip toe into new flavors or new veggies. For example, we learned that pediatric nutrition experts suggest introducing veggie-reluctant eaters to new veggies one at a time, so we have a whole chapter devoted to simple, single veggie recipes.

Was the goal from the beginning to donate 100% of the book’s profit, or did that idea come later in the process? Whose idea was it originally?

As parents, my wife and I are lucky that we can afford fresh produce for our kids, but I didn’t have that luxury as a child. There are so many communities in the US who face food insecurity and lack of access to fresh produce. We’re excited to be able to support some of these programs with book proceeds, including Edible Schoolyard, Alice Waters’ program, that developed curriculum for getting garden to table fresh foods into schools, and the garden school foundation’s work with helping kids at title 1 schools develop lifelong healthy eating habits by involving them in gardening and cooking.

Is there any chance of a book tour?

We’re not doing a tour, but we are doing a few signings. Keep an eye on my social media; we’ll do a few more pop-up bookstore events.

Advance Preview: Locke and Key is a Fantastical Journey Not to be Missed
Wednesday, 05 February 2020
More Articles...