Exclusive: Hera Hilmar on What's to Come for Maghra in "See"

Apple TV+ recently aired the first season of their series, See. The show takes place in the far future, when a virus has killed most of humanity and left the survivors all blind. Even discussing sight became heresy.

When Maghra, played by Hera Hilmar, wife of Baba Voss (Jason Momoa), gives birth to twins with the ability to see, Queen Kane (Sylvia Hoeks), who is later revealed to be Maghra’s sister, dispatches a Witchfinder General (Christian Camargo) to bring her the twins.

Hilmar recently talked to SciFi Vision in an exclusive interview about creating Maghra, what it was like to pretend to be blind, her opinions on the future of her character, and more. 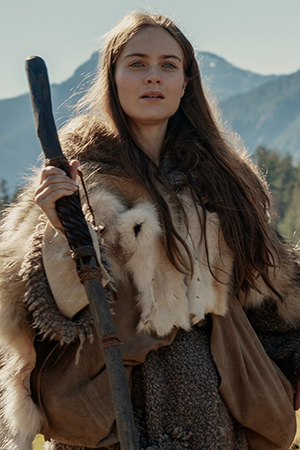 SCIFI VISION: Can you tell me, other than the script, is there anywhere else that you drew inspiration from when you were creating the character, like anyone you thought of? Anything like that?

HERA HILMAR:  I think you always draw on so many. Of course, you're working the most from what you have on the page, and then you start pulling it off the page in the prep period. Then of course, when you come to shooting it, I think so much of the character starts to come to you.

In terms of Maghra, I would say, it wasn’t one person I was [thinking of], but there were a lot of inspirations, many women in my life who come from backgrounds that they'd rather not come from and want to move on somewhere else. I’d say she was a bit of a mixed bag of a lot of people in my life that I drew from, without naming any names.

Can you talk about her costume and creating character in that sense?

I think what Trish Summerville, our costume designer, did is amazing. We worked a lot with sort of what we thought would be practical, everything from the clothes to the hair and things. You know, there's a lot of beauty in it, but at the same time, usually that comes from sensory elements, like for example, touch and obviously warmth and material and shapes and things like that.

And I mean, at the beginning, I'm pregnant, and in the first episode, we put a lot of action scenes there. I had this big belly and boots and a lot of furs and a lot of under layers and a lot of stuff to carry around, plus two babies. That was interesting.

And then I think just in the moment when we were filming, it was very cold, so we would try sometimes to kind of show some of the [many] layers of warm things, and we tried to do that.

But I think she has this element of her background about her that kind of shows through her clothes in some ways, but not enough for you to know it; you just sense it. I don’t know if you could see it too much from how the Alkenny live, but I think it’s all within her. She has that; you can sense where she comes from, and that was important to us.

At the beginning, you guys did the sort of boot camp training where you had your eyes covered and got to pretend you were blind to kind of get in that headspace. How did that inform your character as you created her? How did change the way you portrayed her? Did it make you do things a certain way? Or were there certain things you thought about that you wouldn’t have otherwise? 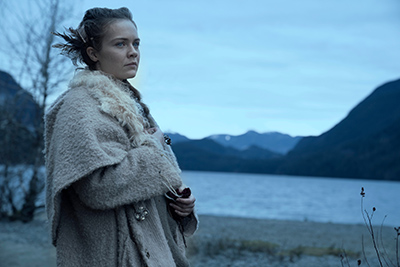 Yes, absolutely. I first of all realized that in terms of, for example, how people express themselves emotionally. If nobody can see your face, you're going to show different reactions to things, and you’re going to maybe sometimes show emotion in a different way than you would if people could see you. Like, if you tear up, somebody might not know it unless they hear it in your voice or sense it [or feel it]. But that was one thing that I think I portrayed sometimes differently than I would have if she had vision.

I also thought about the fact that she knows her kids can see her. So, she knows that by facing them and maybe sort of - I would imagine that over time she would know sometimes when her eyes were closer to their eyes and things like that, sometimes sensing that. So, I would play more sort of visual face to face contact with them than I would with other people.

It just really informs your imagination and sort of how someone as a character just behaves and thinks and moves. It just colors everything. It's really hard to not have it color everything.

Sensory elements become stronger too, like hearing and of course smell and touch and everything.

I was just going to add on to that and ask, was there anything about pretending she was blind that was particularly difficult for you? For instance, I know Jason had said something before about it being hard to not be able to look at people and things like that.

Yeah. It's hard, just because it's different than you normally behave. And it’s sometimes kind of tiring on your eyes, because when you can see, you're kind of focusing your eyes, and you use them differently. So, it can be a bit draining on the muscles of your eyes. 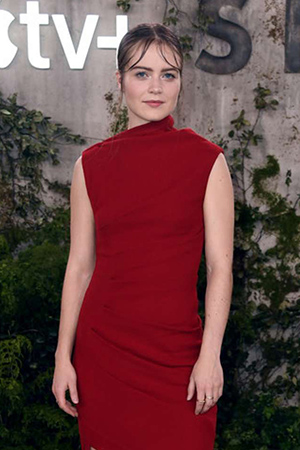 Also, just physically, like with physical movement and sort of body language. I found it sometimes hard when, like, there are moments where the easiest way to shoot scenes - like you would shoot a scene between people that are looking at each other, and it really doesn't work in the same way, I feel like. So, we have to find new ways of shooting them, because if you don't have the eyeline connecting the shots, you have to have something else to connect them, whether it's physically or like placement in the frame, or whatever it is. There was a lot of technicality that we had to think about in that way. It's like moving around and all kinds of things.

Can you talk a bit about the end of the season, about her sister deciding to let her share her power? Why do you think the queen agreed to that, and do you think that Maghra can trust her? I’m just curious to know your opinion of what could happen.

I mean, can anyone trust a woman like that? I think that’s a very complicated question.

Basically, I think that what Maghra’s done until the end of the season, every move she's made, has been the best move she could make at that moment to save her children.

And I think at some point, people will see what she does, and go, “Why didn't you do that earlier? Why didn’t you do this?” or whatever, but I think knowing her family and what her sister has done and everything - you know, she knows what she's up against.

I think it will be really interesting to see where that will go next season in terms of, you know, her sister might promise her things, but Maghra is different. And I think she'll just have to deal with that as it comes along and in her own way. I think it'll be interesting to see what that will do to her as a person. I'm just as curious as you to kind of figure that out in some ways.

I assume you don't actually know anything that's going to happen, because you haven’t started filming season two yet, but I was kind of curious. After you said that, I was thinking, what do you think about it from Maghra’s end though? Do you think that she is willing to work with her sister, or do you think she could potentially try to overthrow her? I was just thinking that's also a possibility, which I hadn't really considered until now.

I know some of the things that are going to happen, so I think I need to be careful about what I say, but what I'll say, though, what I think is clear right now, is that we know that her father wanted her to take over, and for a very good reason. And she believes that that was the right thing to do, but at the same time, she couldn't make that happen. 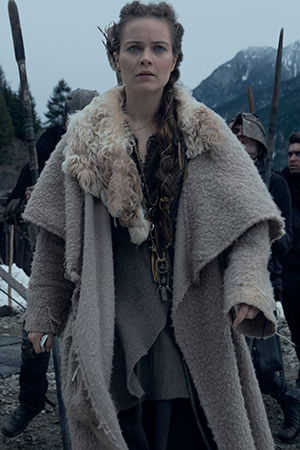 So, Maghra ended up just leaving the whole thing, and I think there's something that's building in her. You know, that idea of like, should I have done that? And would the world be better if I would have done that? There are so many things. Like, do you do that just out of necessity, or do you do that because you want to somewhere deep down, and what does that mean? Does that mean you feel powerful; does it mean you feel isolated because you’re not with your family? There’re just so many things, and so I'm just curious to explore what that is and to see that side of her as a person.

And this kind of ties into that, but I'm curious too how finding all of this out is going to affect her family. Can you talk about their reaction and how you think that's going to affect things once they do find out?

I can only imagine, and I genuinely am just imagining this; this is not me being coy. I mean, I would imagine that that's going to be very complicated. I mean, wouldn’t it be? I would imagine so. I mean, they obviously don’t know anything about her really. Then there is also [her family] having thought that she was gone, and then finally accepting this new reality. I don't know. I just think it's going to be very complicated. [laughs] That’s all I think I can say.
Twitter
BotonSocial por: SocialEmpresa
Category: Interviews