Recently the original film Books of Blood premiered on Hulu. The movie, directed by Brannon Braga and based on the anthology series by Clive Barker, takes both stories from the books and new and combines them into one narrative.

Yul Vazquez plays the part of Bennett, a hitman who is after the Book of Blood but ends up with more than he bargained for.

The actor recently took part in a press junket for the series and talked to SciFi Vision about working on the film, working with Anna Friel, and more.

Be sure to check out the film on Hulu, and you can read the full transcript of the interview below the video.

SCIFI VISION:  Hi, Yul. Thanks for talking to me. I appreciate it. 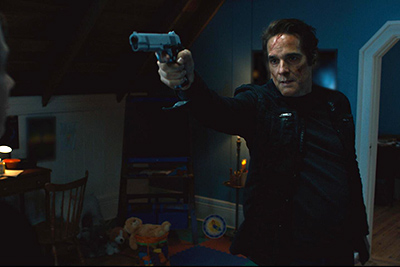 YUL VAZQUEZ:   Nice talking to you.

Last time I saw you was on the Midnight Texas set.

It wasn’t too long ago.

I got involved in the project; I got sent the script, and then I made an audition tape for it in New York and sent it. Then, I got on the phone with Brannon, and we talked about it, and that's how I got hired. That's how that one happened.

No, you know, [when] Bennett starts the film, Bennett’s not in a horror movie. I mean, Bennett's a hitman. So, [I] start to film, and you know, there's just not really much that you can prepare for those things. I just work more from what's in front of me at the moment and what the environment says and what the text says. There's no…additional preparation.

Was there anyone that maybe inspired you while you were creating the character that you thought about in particular? Or did you just completely take it from the script and your head?

No, I mean, I, quite honestly, no, I didn't. It's not modeled after anyone. You know, the most important thing to remember, for me, for this character, was that this guy didn't want to do this anymore. He wanted to get out and go and live, and live a peaceful life; he was sick of this. So, that's the thing that's driving this guy, and if you if you put that in there fully, it'll get you to the other side. So, that's what I worked from and used.

What can I say about it? I mean, I can't really mention it. So, I mean, I've done that kind of work before. It's all cool to do those things, you know what I mean? I can't give the story away.

Okay, I was just curious, because I know Brannon and Clive had said it was practical [effects] and everything.

Can you talk about work with Anna Friel?

Oh, I love Anna. Oh, my God. That was amazing. Yeah, that was great. That was great. When I saw she was doing the movie, that really made me really want to do this. I love Anna; I had a great time with her. She's really, really great.

Everybody I worked with on this I thought was great. Andy McQueen, those terrific young actors in Canada, you know, everybody really, but those two are the ones I spent the most time with.

And I saw the film. I thought everybody did a great job.

Yeah, it was really good.

Do you have a particularly favorite part that you can tease? [laughs] I guess it's hard if you can't talk about specifics.

I love the coffee shop scene.

Yeah, that was funny.

Yeah, because it has levity.

Are you a fan of the genre?

Some of it. Yeah, I like a lot of it. I like a lot of it. This my first horror movie, really, but, you know, I do; I do like it. Some [horror] is really…a little over the top, but not this. I don't mind horror, as long as it's earned within the story. You know, it's insanely gratuitous horror that I just find silly. 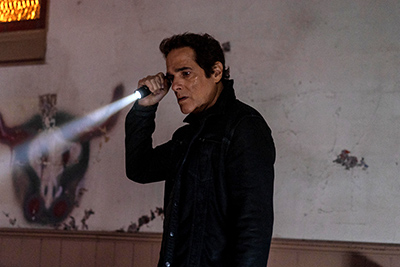 Right. Yeah, I think this one was more about the anticipation and less about the special effects of blood and everything.

And the performances are grounded in real behavior, which allows you to believe the other stuff more.

Well, other than working with Anna, was there anything else in particular that made you think that you definitely wanted to do this?

You know, talking to Brannon was great. I found him great on the phone, and he had great ideas, and he was listening to my ideas.

Again, like the interesting thing to me was that this guy, like any character I play, is the conflict of a person in the midst of the crisis. You know, he starts the movie, he's got to go collect money, but he really wants to not do this anymore. He gets a tip that could be like his ticket to paradise, and he follows that tip.

Can you talk about working with Clive, your first meeting with him?

I can make stuff up for you if you want. [laughs]

Did you get more of Bennett’s backstory than we see, because we didn't really get a whole lot? I thought some of it maybe was based on the one book, but I hadn't read it, so I wasn't sure. Did you have to kind of just make that up in your mind, or did you maybe get a little bit more than what we see?

The backstory for Bennett?

Yeah, because we obviously don't get a whole lot.

I think the backstory for Bennett is what's in the script, really. I think the important thing is not the backstory for Bennett, it’s what Bennett is at that moment. You know, whatever happened in his life brings Bennett to that moment, he goes to get this money, and he's already sick of this. He wants to get out, and that's all I really needed to push this through. I didn't need to know anything else…because anybody can relate to something like that, doing something that they don't want to do any longer, and they just want to do something else with their life.

Yeah, that was also kind of what I was going to ask, was there anything personally that you kind of felt you brought of yourself to the character or that you connected with? Because, obviously, he's not like you.

Well, I would argue that the character is like me.

…The only character is whatever the text, the material says, but it's not. If the character is always me, it has to be, or any other actor. It can't be anything else. I just think that's a multiple personality disorder. You know what I mean? Like he became that guy. I don't think you can do that. I think it's always you, and it's whatever is written is coming through the filter of you. That's what makes it unique to you.

Was there anything that you found a particular challenge then? 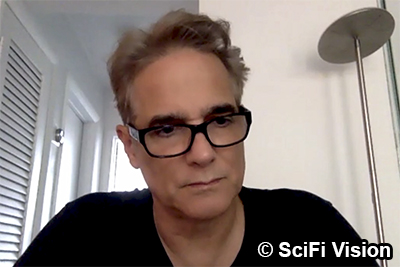 Well, you mentioned rats, and obviously it sounds like that didn't, but is there something in particular that scares you, whether it's watching part of a horror movie or just in general?

I mean, I think some of the things that really frighten me in life are just kind of mundane. I'll tell you, what frightens me in life, is to be frightened. You know, I think fear's a terrible thing.

It's a great tool in storytelling, but you know...

But in real life not so great. [laughs]

Well, it can be; it can be a check, keep you in check, but it's a dangerous thing.
Twitter
BotonSocial por: SocialEmpresa
Category: Interviews