Recently, the CTV series Jann was released on Hulu. The comedy series, starring Jann Arden, follows Jann, a fictionalized version of herself. Jann is a singer-songwriter struggling with the reality that her music career is waning while also juggling her newly single lifestyle and family. Can her new manager help her to reinvent herself and rebrand her image?

Arden recently talked to SciFi Vision in an exclusive interview during a junket at Hulu about working on the series, including how much is from real life, how it came to be, and more.

Be sure to check out Jann, available now on Hulu. You can also read the full transcript below the video.

SCIFI VISION:  Hi, thanks for talking to me today, I appreciate it…When I first read the press release for the show and read your name, I didn't realize it was you. I started watching it, and I’m like, “Oh, that Jann Arden!” Because I remember buying your single back in high school. So, that's really cool. 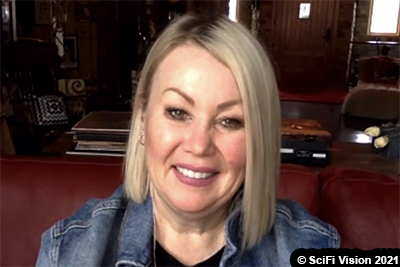 So, I'm curious though, how much of the show is actually based on your real life, and how much is just comedy that you've added?

My mother has passed away, but I have a mother in the show. I don't have a sister, but I have a sister in the show. TV Jann goes on a lot more dates than I do; I just live alone in the trees with my dog. But it's very farcical, and I think a lot of my storytelling and just things that I've relayed to the writers kind of abstractly, like, “Oh, we should do kind of a version of that, but change it into you getting paid in cheese or something like that.” So, yeah, a lot of people say, “Is that your house?” I’m like, “No, it's not my house. It's just all sets and all fiction,” but it's fun for people to try and piece together “What's real? What's not real? What’s going on here?” I don't think we've seen too much of that in television.

I was going to say, otherwise, “I want to go on your social media to see half of that stuff!” [laughs]

So, how did the idea go from your head to the TV?

Well, a gentleman named Andrew Barnsley, one of the producers of Schitt’s Creek, came to me like five years ago - a Canadian guy - and said, “Jann, in a perfect world, if you were going to do a TV show, what would it be?” And I'm like, “Honest to God, I don't know.”

So, a year went by, and my manager, Bruce, said, “You know, you should really entertain thinking about doing television.” 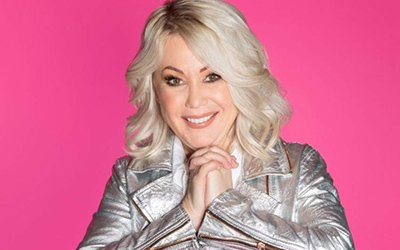 So, my very good friend, Leah Gauthier, who's in reality TV, she knows Andrew - long story, but it will make sense. She came to my place, and we sat at my kitchen table for two days, and we kind of jammed out this idea of a singer-songwriter whose mother has dementia and, you know, failing career trying to find relevance.

So, we had a pitch sheet, and we took that to Andrew, and then CTV, one of the major networks here in Canada, who gave us a bit of seed money to do kind of two scripts for the show. “What would it look like?” And here we are!

[laughs] It worked out.

So, are we going to get to hear more of your own music as we go on? I mean, I know there was a couple, you know, little things in the episodes, because I saw the first four, but is there going to be more of that?

Yeah, I think they'll always be a little bit of music. I don't think it's ever going to be like full-blown stuff, because it is a twenty-three minute sitcom with commercials. To do a three-minute song heavily cuts into your storytelling ability, so I think they'll always be little snippets. I think it keeps it interesting for people that certainly have followed my career for the last thirty years, but I think it makes the show interesting, too, because, you know, my character definitely is trying to kind of somehow crawl back to this place that she was. But I think it's a real lesson to all of us that somehow think that going back is better than going forward.

So, what was the hardest part for you, just in general?

Well, I mean, [there was] a lot of fear involved, for sure, Jamie. I was just like, “What the hell am I doing? I'm not an actor. I've not got a lot of training.” But I think I just really relied on my experience of being on a stage the last thirty-five years of my life and performing in front of people. I worked with a really great guy, Tom Carey, who helped me memorize fifteen pages of dialogue every day. There's no way around. There's nobody who can hold up signs. There's no microphone that someone's talking into with an earpiece. You have to learn it. It's just repetition, and every actor does it differently. That was my biggest fear, like, “Can I memorize this stuff?” 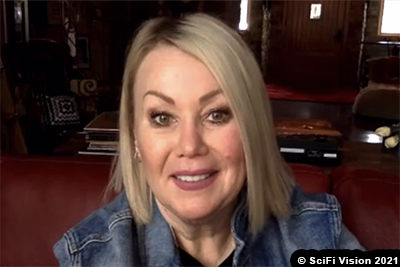 At least it was only a half-an-hour, right? [laughs]

Yeah, thank God, but it still is fifteen pages a day, and we do something called block shooting. So, on any given day, I could be taping pieces of three different episodes. So, you're changing clothes and changing makeup and changing your hair and skipping around. It's never linear. Like, you don't start shooting at the beginning and end at the end. I mean, I think last to the second season...one of the last scenes we shot was at the very beginning of the season. So, it’s all crazy.

Can you talk a bit about working with Zoie as Max?

Zoie Palmer's a consummate professional. I mean, she's done a lot of dramatic roles [like] Lost Girl and Dark Matter, the countless movies that she's done. She's known as a dramatic actress, but she's extremely funny; she's really musical. She's so versatile, and there's just nothing she can't do. So, I fought very hard for Zoie, to have her on the show, and I was very determined to have her play my sister. Obviously, she's quite a bit younger than me, but that's kind of the gag too. I'm just thrilled to have her on board, and she brings so much to the table. She's just a pro.
Twitter
BotonSocial por: SocialEmpresa
Category: Interviews