Tonight FOX aired the mid-season finale of season two of its series Prodigal Son. The series follows criminal profiler Malcolm Bright (Tom Payne), who has a knack for getting inside the minds of killers and helps the NYPD to solve crimes. He also happens to have a serial killer (Martin Sheen) for a father.

The cast and producers took part in a panel earlier today as part of the Spring TCAs to talk about the episode, Catherine Zeta-Jones joining the cast, the chemistry between Malcolm and Dani (Aurora Perrineau), and more.

Zeta-Jones was already a fan of the show when she got the role, and she was drawn to the material. “…I gravitate to the kind of nuance of what I think was so different and powerful about Prodigal Son. It's pretty good family drama with a twist of danger, and it's a dark family, and I gravitate to kind of darker material.” She added that she was also drawn to the role because of Michael Sheen, who, although she had not met before, is actually from her hometown and of similar age. 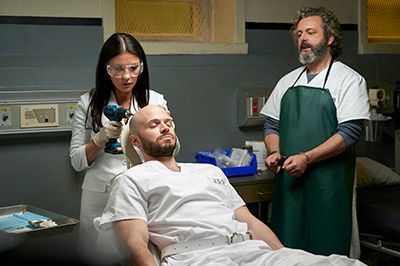 The character also intrigued the actress and she wanted to know more. “This character was exciting, and I didn't know where I was going to go with it, but I knew that there was a fundamental interest, intrigue…Why is she in the Claremont Psychiatric facility?  What got her there?  She should have surely known who The Surgeon (Sheen) was, admired him from afar…And now she's sequestered in the bowels of this facility with that very person, and it was intriguing to me…There's a complexity to her that is really, really starting to unfold now as I'm part of this fantastic array of great actors.”

She had nothing but praise for the rest of the cast. “It was so wonderful to have Lou direct my first episode and my introduction into this great show…What was great coming into this show was that I was welcomed so lovely, so nicely.  There's a familiarity to working with Michael that is just inherent, which is very comforting when you walk onto the set for the first time and the cast and crew all know each other.”

Everyone was eager to get to work with the actress as well. Halston Sage, who plays Ainsley on the series, said she was “excited.”

Lou Diamond Phillips, who stars as Lieutenant Gil Arroyo, had nothing but praise for working with Zeta-Jones, including directing her in the mid-season finale, saying she was “gracious, warm, and so inclusive of everyone.” He also added, “From the moment she stepped on set, it was as if she'd been a part of the ensemble from the beginning. She [be]came like a team player. She came to play…It was seamless. It was effortless.”

Frank Harts, who plays JT on the show was excited, but also nervous, “I was also a little scared, because I was thinking, ‘How am I going to hang with Catherine in all of these one‑on‑one scenes that we are going to hit?’  I'm trained. I come from the theater; there's a lot there, but, you know, that's Hollywood royalty.  She's a Titan, man. So, I just had to wrap my brain around that.” 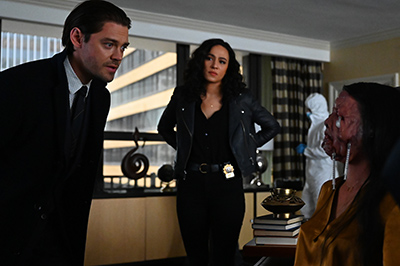 Star Tom Panye was pleased as well, and also brought up Alan Cumming, who also guest stars in the mid-season finale. “I was super excited, happy and excited that someone like Catherine would want to join our little gang…I often get so overwhelmed by everything that happens on this show that it's difficult for me to sit back and see it as the entertainment that it is. It's just so fun when we have these fun, flashy characters come in and join us like Alan Cumming's character who came in. Then, Catherine, she's come in to join us for a much longer stint.  For me, it takes just a moment to sit back and go, ‘Yeah, we are making this product, which is attracting people.’ That makes me very proud and very happy, and I'm excited for where our story line goes in the show.”

During the panel, the chemistry between Malcolm and Dani this season was also discussed and the possibility of a relationship was teased. According to executive producer Chris Fedak, “There's obviously something there. I think the one thing from Episode 6 is we went into Bright's subconscious.  So, obviously, even, overtly, he might not be thinking this every day and every minute, but his mind is saying there's a relationship there. There's something percolating. So, we are really interested in exploring that, and we love all of the relationships on our show. It's something that when you have a cast like this, you just want to explore those relationships.”

Executive producer Sam Sklaver also talked about watching the relationship between the two characters progress. “We've been slowly building through all of this, which I love.  It hasn't been first to romance. It's really been first to friendship. Bright is a weird guy to be friends with, and he comes from a pretty weird family.”

Actress Perrineau agreed and said that the transition was “very human.” She added, “Sometimes, right away, you are not into somebody as a person, and then, as time progresses, you learn more about them, more about their characteristics, who they really are. I think that you guys did a really good job of making that transition really smooth and believable, and it's really fun to play someone who is learning about somebody in an organic way.” 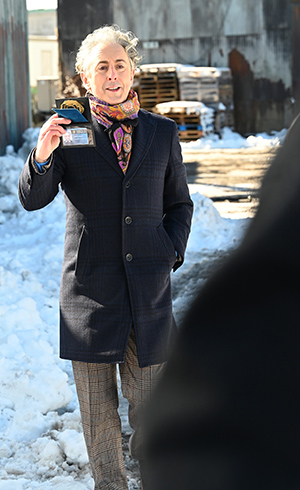 There is also great stuff coming up for actress Bellamy Young in the back half of the season, who teased a little bit about Jessica’s journey coming up. “I think it will be a rocky road for Jessica…Ultimately, the truth always sets you free. Particularly the episode we are filming right now, it leads her into a very dark predicament. I haven't seen the scripts to follow; so, I can't say for sure.  I'm not being cagey, but I always believe, personally, that truth will get you out and get you free. So, if she can face what's back there, then she can move forward.”

Actress Keiko Agena revealed that Edrisa has an important episode coming up as well. “We just finished an Edrisa‑centric ‑ I guess you could call it that ‑ episode, what's going to be 209, where Edrisa gets to do a lot of fun things. As far as building this character, I have a lot of things that I want to do and that I sent to Chris and Sam about my best wishes and biggest dreams for her. I think I'm similar to Edrisa in that way, whether it's realistic or not. Edrisa has a lot of hopes.  So, we'll just see how things unfold, but this last one that we got to play was very action‑packed. We get to meet some people outside of the precinct, outside friends of Edrisa.”

The back half of season two of Prodigal Son returns to FOX April 13th, but first, be sure to catch the mid-season finale, “Face Value.” For more, you can also read SciFi Vision’s recent exclusive with Lou Diamond Phillips talking about directing the episode, working with Zeta-Jones, and more.
Twitter
BotonSocial por: SocialEmpresa
Category: Interviews