Friday marks the premiere of the film Boss Level on Hulu. Directed by Joe Carnahan, the film stars Frank Grillo as Roy Pulver, who after waking up and being murdered, is stuck in a repeating time loop. Roy must use his skills and wits to last the day and use clues to uncover details about a mysterious project, break out of the loop, and save his ex-wife (Naomi Watts) and son (Rio Grillo).

Carnahan and Grillo recently talked to SciFi Vision about the making the film, the challenges of a shortened shoot, and more.

Be sure to watch Boss Level on Hulu, and you can also read the transcript following the interview.

***Some unrelated content from the video was removed from the transcript***

SCIFI VISION:  Joe, I know you worked on the screenplay. Did you come up with the idea for the film? 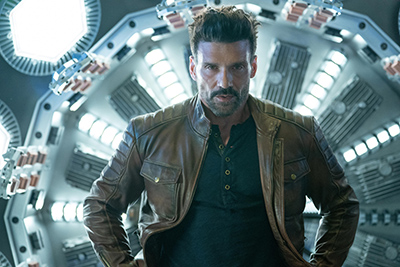 JOE CARNAHAN:  I did not. It was Chris and Eddie Borey [who] came up with the idea. It was this really good script called Continue that I got my hands on years ago and set about rewriting with the idea that I would direct it, because I've never done a sci-fi film, and this is probably as close to sci-fi as I would get, because it still has a grounded sensibility about it. But yeah, it was a screenplay that I rewrote.

I always wanted Frank to play Roy, and then he and I began a decade-long odyssey to try to pull that off. But yeah, it was a really good piece of material to begin with before it became Boss Level.

SCIFI VISION:  This started quite a while ago, didn't it? From what I had read about it.

FRANK GRILLO:  Joe and I were in high school. [laughs]

JOE CARNAHAN:  No, Frank and I had just done The Grey. I wanted to work with him. I had this thing; I wrote it. You know, I don't ever really write for a specific actor, but I wrote Roy really for him. Then we just stuck to our guns and endured a lot of nos and a lot of years of "Forget about it; it's never going to happen," and yet, here we are. So, it was all worth it, all worth the struggle in the end.

FRANK GRILLO:  Well, the testament to Joe is he could have easily went and made the movie like, with Mark Wahlberg, but he waited until we could get it made with me. [laughs]

SCIFI VISION:  Frank, since he wrote it for you, I'm guessing most of it came from the script, but is there anywhere else that you were inspired by for your character? Maybe you put a bit of either yourself or somebody else into it when you were working on it?

FRANK GRILLO:  …There is a video game element to the film. The screenplay was so great, and I just always imagined that this was one of those guys that I would see in a video game. He looked a certain way, and he sounded a certain way, and his sense of humor was - he made everyone laugh. So, I just kind of took it from there. The screenplay was so good that there was very little I needed to do except use what Joe had given me as an actor.

SCIFI VISION:  Did you go through any stunt training, weapons training, anything like that for this?

FRANK GRILLO:  The other thing is, we originally had forty-one days to make the movie, and then in the eleventh hour, we were given twenty-seven days. 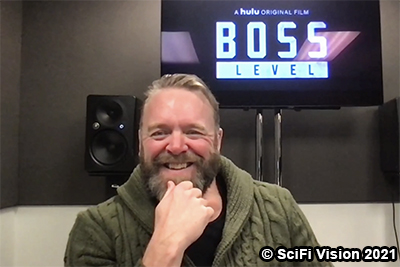 I was just doing a bunch of press with Mel Gibson, who's got an Oscar for directing, and he just said a couple of times he thinks Joe should teach a masterclass on how he executed this in twenty-seven days.

But yeah, there was a lot of bumps and bruises and training, and we had to truncate the whole thing too.

SCIFI VISION:  Joe, and that may be it, but what was the biggest challenge you had while putting the film together?

JOE CARNAHAN:  You know, I think the biggest challenge, Jamie, is it goes from being this slapstick, really high octane action comedy to then the story about this wayward absentee father and the son he doesn't really know, and I was terrified that we wouldn't be able to hit that gear change. I wasn't really worried about logistically and the stuff we had to shoot. I was worried about emotionally [with] how we could make the change and it would work.

I think casting Frank's son as his son in the movie was huge. For me, it was a bit like hedging a bet. It's like, I don't have time to have these guys develop this. I want father and son, because it will be this indelible thing that you'll feel. I think that we probably got away with it based in large part on that, because I can see in the movie Frank looking at Rio, not Frank looking at Joe. I can see him looking at his boy.

So, I think that stuff was to me a lot more difficult than any of the, again, like I said, the technical logistical stuff, things we knew we were gonna have to get around, which was again, as Frank mentioned, fifteen days of our schedule was cut and we just had to figure it out.

SCIFI VISION:  Frank, same question. But first, what was it like working with your son? I hadn't realized that.

FRANK GRILLO:  Again, a testament to Joe. I didn't want him. I didn't, for many reasons that I won't get into, but I said, “I'm gonna send him to audition.” And then we did, and Sharon Bialy said, "He's good. He's the best." Then, I sent him to my acting coach, and she said, "I can't coach him." I went, "Oh, thank God, he's no good," and she goes, "He's great; he's great." It's just like Joe said, once we were on set together there was something. I'm so in love with my child that the camera's not gonna lie about that, and it didn't. Every time he opened his mouth it was like I was rediscovering this boy, because we were doing something that we had never done together, my son and I. And I think the kid steals every scene I'm in with him; I really do. And today I asked him - we shot the movie two years ago, I said, "What if you get offers?" Her goes "Eh, only if it's Marvel, or if Spielberg calls." [laughs]

Did you have any acting challenges you can think of?

FRANK GRILLO:  For myself? I think Joe and I were so dialed in with each other as director and actor, as producers, we were so dialed in that there was no time to be afraid, or there was no time to overthink anything. It was just a great symbiosis that we continue to have on everything we do. I think that's why we seem to be catching lightning in a bottle a lot of times. 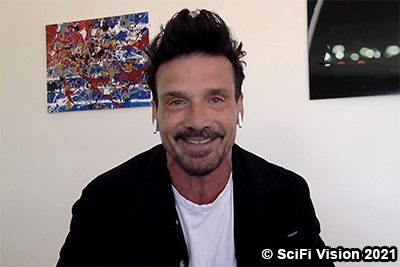 SCIFI VISION:  I don't know if it makes it more difficult or less difficult to be replaying different versions of the same scene, because I would think to some extent you would need [fewer] takes, because you'd use some of maybe those other takes. Can you talk to that, both of you? I'm just kind of curious how that [worked].

JOE CARNAHAN:  Yeah, that's very true. Once you kind of develop the pastiche of what the film is visually, you can use - people are counting on repetition and almost redundant images. There's a moment where Roy is trying to infiltrate Dynow, and you see gears shift, you see an elevator door, and you know exactly where you are. You don't need a lot of visual material. I certainly think that helped us too in the edit, because we didn't have the time to shoot all that. You had to be very specific about what you were going to change around, but you want to keep it within the same framework of stuff that people have already seen that they are accustomed to, because it keeps them engaged.

SCIFI VISION:  Anything to add, Frank?

FRANK GRILLO:  No, that's exactly it. We knew that we would be reusing stuff. So, when we got it the way we wanted it, we could move on, because we had that in our bag of tricks. It's funny with time loop movies - you know, the great Harold Ramis, with Groundhog Day - sometimes it works, and sometimes it doesn't. I think we stuck close to the mechanism that Groundhog Day had, which is why I think it worked so well.