Exclusive: Billy Howle Stars as Detective Strangeways on The Beast Must Die, Now on AMC+

Monday AMC+ premiered the new six-part thriller, The Beast Must Die. The series, which will have it’s linear premiere this upcoming Monday on AMC, will continue to be released on the premium streaming platform a week in advance. The series takes place after the police investigation into the hit-and-run death of a young boy (William Llande) is dropped, and his mother, Frances (Cush Jumbo), decides to go after who she thinks is responsible on her own by pretending to be a murder-mystery novelist researching her book. When Detective Nigel Strangeways, played by Billy Howle, starts to believe his department may be responsible for a coverup, he takes on the case, all while dealing with his own PTSD over the death of his partner.

Howle recently talked to Jamie Ruby of SciFi Vision in an exclusive interview about working on the series, filming on the Isle of Wight, his emotional scenes, and more.

Be sure to check back for part two of the interview which will be released later in the season. 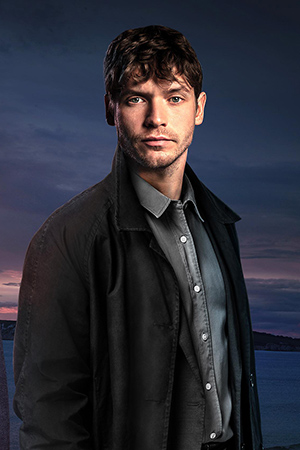 SCIFI VISION:   Can you talk about how you got the role?

BILLY HOWLE:   It was actually two weeks, or maybe even a week before the first lockdown in the UK. It was the sort of normal avenues, and I just actually only did one round of auditions with a casting director and the director, Dome [Karukoski].

Then, about a week later, we went into lockdown. So, actually, the whole project was on hold for quite a long time, and there was a sort of tentative start, which actually came to fruition, and we ended up in the Isle of Wight, which is quite an isolated place. So, it made a lot of the COVID traffic and stuff a lot easier.

Yeah, that would definitely help…That was one of the things I wanted to ask; how did COVID kind of affect the production?

Yeah, well, I mean, we weren't entirely isolated, you could still buy a ticket on a ferry and get onto the island if you wanted to. [laughs] And I think people [did], you know, just like holiday makers, and it was this sort of tentative moment where things started opening up. So, actually, the Isle of Wight was quite easy to to access from the mainland of England. Actually, a lot of people go there for their holidays; you know, he even talks about it in the show. So, yeah, that was always a worry, and it's like, you can't actually keep tabs on a crew of whatever it was 150 people or something crazy. Then, all these cast members who are going to and from the mainland, because they want to go back to their actual homes in London over the weekend, you can't keep tabs on them. So, that was always going to be a problem. So, the damage limitation was just doing rigorous testing however many times a week, a mixture of both PCR and the the lateral flow test. And at the same time, we were all learning, right? I mean, sort of six months before, these COVID managers or whatever, they didn't have jobs. [laughs]

[laughs] At least some people got new jobs, right?

Yeah. Right. [laughs] So, then suddenly, they are the official governing voice of COVID. It's like, we're always going to defer to them and go, “Please, inform me about what this is and what we're meant to be doing and how to keep safe.” And I think a lot of it, I would argue, is pretty much common sense, like, keep yourself clean, don't get too close to people, and wear a mask when you need to wear a mask and all of this stuff. But actually doing that on a set, like the logistics of it, is actually pretty tough. There were so many small things, like water bottles being a thing and actually still being green and eco friendly as a film unit, but at the same time, being COVID safe. That became quite difficult. So, yeah, it was a learning curve, for sure.

Well, hopefully, it's going more back to normal.

Aside from that, can you talk about working on the Isle of Wight? 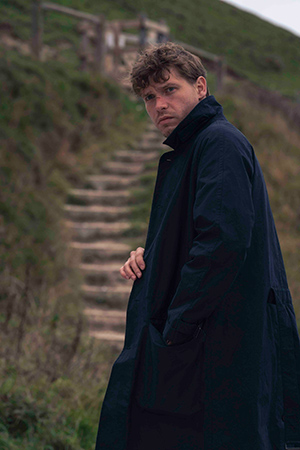 Yeah, it's a really beautiful place. It's surrounded by water; it is an island, so it does feel quite sort of isolated, and in part, quite provincial, but not in a negative way. It doesn't necessarily feel like the rest of Britain. It sort of feels like a place in and of itself, and I think that’s embedded in the story, too, you know, that it's sort of a law unto itself, and the police department functions in a very different way. It's sort of quite idiosyncratic. I mean, we were there sort of in the summer and then into autumn, so we really saw a change. It's this sort of dramatic, picturesque scenery as you see in the story, and it's just watching the landscape change during those seasons. Yeah, we had a really nice time.

When I talked to Cush last week, she was talking about learning to sail for the show. So, you got to go on the boat with her. What was that fun? Because that really looked like a lot of fun.

Yeah, it was. I mean, that time of year, even though it's probably near to the coldest time of year when we were actually doing that part of the shooting, the water was the warmest, which is a strange thing. I had no idea, but around November, actually, the water temperature is the warmest all year.

So, yeah, I was amazed by how quickly that whole crew, that whole team, picked up sailing and made it look completely convincing that they’d been sailing for years. So, I was quite jealous that I didn't get to do it [myself]. I was very much a city boy that didn't spend much time on yachts.

Can you talk about working with with Cush?

Yeah, we had a good working relationship. We’re both telling the same story, but we have our own stories within that. So, it's interesting…and it's sort of inevitable; even if you're working with someone who isn't a method actor, there is still some kind of residual feeling on and off set of what's actually going on in the story. So, yeah, there's a sort of inevitability to that, but we had a good working relationship. I would jump at the chance to work with her again, for sure.

Did you originally know that there was a book, and have you read any of it?

Yeah, it's not really my bag. It's not the kind of thing you see on my bedside table, but I did read it. It's not wildly different, but it's very much of the time. I mean, I think the book is set in the 1930s. So, there’re quite obvious differences there in terms of it becoming contemporary, and the characters are quite different, the way that they function with each other, and their relationships are quite different too. Just sort of the raw materials are there; the essence of the story is definitely contained in the book.

Was there anywhere other than the book or the script that you kind of got inspiration as you were creating your character? 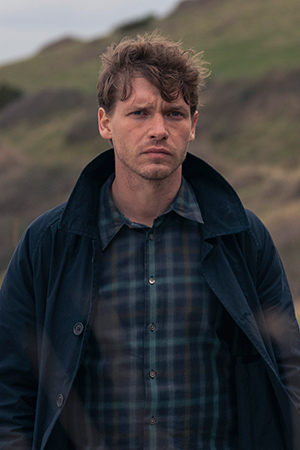 Yeah. I mean, I think my inspiration comes from sort of anywhere in any way. I mean, [there are] so many sort of procedural crime dramas or cop dramas, that those stories stick in your head, and it's not like I never want to emulate those people. It's unavoidable that they will have some kind of impact, and they will create your understanding of what  detective cop shows should be like. So, that's there as a given. Then, really, it's about sort of deducing from all of that source material and creating something new. So, hopefully, that's what I've done, really. I wanted to make it slightly different, because I think the writing itself is quite different to lots of procedural cop shows.

I [am] just curious if you did anything with police to prepare, like a ride along or anything, or talk to any detectives, or anything like that?

I think from the writing perspective and through to the director, they were very much in touch with actual consultants who work with film and TV units to make sure that everything was plausible, basically. So, I had no direct direct contact with with them. I perhaps would have liked to have that happen, but there is a kind of hierarchy, and I don't want to tread on any toes and all that stuff. So, without getting too into the politics of it, I had to do quite a lot of the research myself about what a detective actually does, but I don't mind that. It was quite interesting reading.

You have a lot of really emotional scenes, was it hard for you to kind of get into that place, and it's hard to get back out of it after?

Is it hard? I mean, no, I probably wouldn't say that it was hard. I think it can be quite taxing; it takes quite a lot out of you. I've sort of learned to live with it. You know, it's what I do now. I don't really make a distinction between my life and my my acting life; they are one in the same thing, really. And it's important to stay emotionally open and available and all of those things, but, yeah, I mean, essentially, what you're seeing is what I would call real emotion. It's not contrived or sort of artificial.

So, if you didn’t find that part difficult, what did you find the hardest throughout the shoot?

I think what's often quite difficult with these things is there's a lot of information, and, really, my job in a way throughout it is to stay on top of the plot, because a lot of the stuff that we get information from, as an audience, is my character in investigating the case. So, being on top of that and making sure I understand the logic of it and the timeline of it, the chronology of everything, and who was where, when, and who did what with what, you know, it's like playing Cluedo in your head all the time. So, that's quite difficult, but I'm a bit of a stickler for the logic of things. So, sometimes the exposition and the plot really falls on my character. So, to convey all of that information but in sort of an engaging way that's still true to life, that in itself is quite quite a challenge.
Twitter
BotonSocial por: SocialEmpresa
Category: Interviews