Today the film Nine Days comes to theaters nationwide. The movie, written and directed by Edson Oda, tells the story of Will, played by Winston Duke, who spends his time watching the live points of view of people down on earth. When one subject dies, it’s up to Will to test new candidates in the form of unborn souls to find the next replacement. Will finds the unexpected when he meets the free-spirited Emma, played by Zazie Beetz, who is different from all the other candidates.

Duke and Beetz recently talked to Jamie Ruby in an exclusive interview about working on the film, including which characters they are most like and which of their own moments they would like to relive.

Be sure to check out the transcript following the video interview, as well as the previous interview for the film, and stay tuned for the next interview with more cast members. 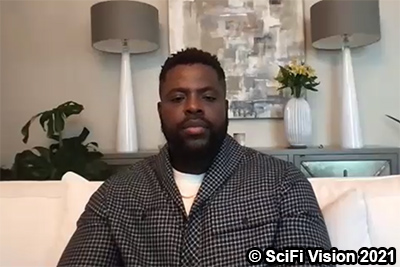 SCIFI VISION:  Everybody in this movie kind of looks at the world in a different way. So, what I want to know, is which character are you most like? Zazie, you go first.

ZAZIE BEETZ:   I don't know if this is like tooting my own horn, but I actually do think I'm most like Emma. We were actually saying, David [Rysdahl], who plays Michael in the film, he's my partner, and he's actually in the other room doing some interviews right now, but we talked a bit about how I think, in some ways, everybody was sort of cast perfectly, and that I think they all embodied really well the sort of elements of their character and that they were kind of born to play the characters. And, you know, obviously, I have my flaws and my stuff, but I think my general philosophy on life is, I strive to be like Emma.

WINSTON DUKE:   I think, you know, just in the vein of Will, I feel like I'm like everyone. I feel like I'm like every one of those characters, because I recognize the defiant optimist in myself, like Emma. I know the self deprecating artist that nothing's ever good enough, like Mike. I know the blind romantic. I know the introverted family guy that just wants to have fun and block everything out. And I know the pragmatist; I know that sometimes hyper capitalistic pragmatist too well. So, I know all those aspects of myself. So, I feel like I'm like all those candidates kind of in a way, where all those candidates are Will’s shadows that he wants to embrace a lot, even though he knows that that might not be the truest part of him, and he wants to shun certain parts, because he doesn't want to accept those aspects of himself. 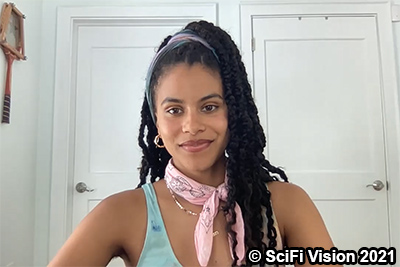 SCIFI VISION:  And then, do you guys have a moment that you would relive or recreate if you could?

SCIFI VISION:  What about you?

ZAZIE BEETZ:   I think I would love to relive... I don't know, there're so many moments, but one, I suppose, I like reunion moments, when I haven't seen somebody for a long time. I'm thinking of one I had in college. I hadn't seen one of my best friends for months, and we were able to reunite for like a weekend, and it was so emotional. And I think just this reminder of your net and your community really are so important. I think, particularly after this pandemic as well, you know, coming together again, those were important. So, I think moments of reunion is what I would like to do again.
Twitter
BotonSocial por: SocialEmpresa
Category: Interviews