Mother/Android, which is set in the near future, shows events unfolding when androids, which were built to serve man, revolt and start killing all the humans. The narrative follows a young couple, Georgia (Chloe Grace Moretz) and Sam (Algee Smith) as they cross the country looking for a safe haven before their baby is born.

According to writer and director Mattson Tomlin, screenwriter of the upcoming The Batman movie, Mother/Android was inspired by the story of his birth parents. “The movie started as a love letter to my biological parents,” he told Jamie Ruby of SciFi Vision in an exclusive interview. “I wanted to talk about my own adoption story. I was born [right] after the Romanian revolution, and this very young couple found themselves pregnant with the world totally on fire in this kind of unprecedented situation. They were nineteen years old, and being I was twenty-seven or twenty-eight when I started writing the script, I just had a little bit more perspective on how young nineteen actually is for the first time. So, it was always, ‘I want to tell that story, and I want to make something for them, but I want to do it in a way that is going to be fun and entertaining and kind of throws down the gauntlet for the kind of filmmaker that I want to be.’ And that's that's how it was born.” 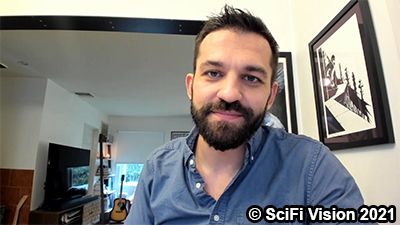 The writer also talked to the site about the look of the film, which he said he wanted to be colorful, casting the three leads for the film, and more.

For the rest of the interview, watch the full video interview below and be sure to watch Mother/Android, available now to stream on Hulu.

***Note that the following does contain slight spoilers***