Over the past three seasons, fans of The Expanse have watched Amos, played by Wes Chatham, grow into a friend and mentor to Clarissa, played by Nadine Nicole, much as Naomi (Dominique Tipper) was to him back in season one. Clarissa's relationship with captain James Holden (Steven Strait) is complicated (remember when she framed him for mass murder?), but she’s making a real effort to settle in with the Roci crew. So, how much is her relationship with Amos responsible for her ability to set aside revenge and become a better person?

“I would say most of it, if not all,” said actress Nadine Nicole in a recent exclusive interview with SciFi Vision. “She'd pretty much given up on any second chances until someone thought that she might deserve that and gave it to her.” 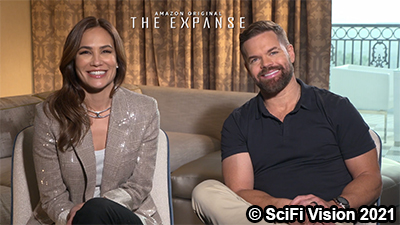 In episode five, she pays back Amos’ friendship by coming to him with the truth about the torpedo. “I don't think she would hide something like that from the crew,” said Nicole, “but there's no way that she herself could bring it to anyone but Amos. So yeah, go to for anything, really. She trusts Amos that he'll do the right thing with that information. That's his family, his tribe.”

Chatham also spoke about Amos’ reaction to that news and his misgivings about following the Rocinante crew into war.

“I think because of the relationship that he has to Peaches…now he's at a place where it's not that he doesn't have the same love and loyalty towards Holden, it's just he doesn't understand what's motivating Holden,” Chatham explained. “Maybe what's motivating Holden is something mentally that Holden's dealing with that's putting his whole crew and family in danger and that's not motivated by a pure reason, and he just doesn't understand it.”

Watch our full interview below, but be warned that the actors discuss a spoiler for episode six.  Don’t miss The Expanse series finale on now available to stream on Prime Video. Also be sure to check out our other interviews for The Expanse.