For All Mankind is in its third and final season, which is already proving to be a huge hit. Since the series began, we have seen our characters not only grow on the show, but also become incredible role models for the young people watching.

This is something that is particularly important to Krys Marshall, who plays Danielle. In an exclusive interview with SciFi Vision, she revealed that she is thrilled to be able to show what an astronaut could look like. “When you're able to see examples of what it's like,” said the actress, “to see that a scientist is not just a fluffy old white dude with the gray mop and a big mustache and a white coat - a scientist looks like me. An astronaut looks like me. So, through television and through storytelling, when we redefine what an astronaut looks like, I think that we help inject into the conversation and into society a shift in what the norm is. So, that way, God willing, there are ten, twelve-year-old kids who think to themselves, ‘Maybe this is an option for me. Maybe I will take more biology classes; maybe I will major in geology. Maybe I will become an engineer.’ That's really exciting for me, and I take that responsibility as a role model very seriously.”

Marshall also prides Danielle on growing as a scientist and a woman, saying that this season she is more confident and a leader of the NASA community, but you will need to tune in to see what happens. Read the full transcript below.

SCIFI VISION:  How do you think Danielle’s evolved since season one, and what can we expect to see in season three without giving too much away? 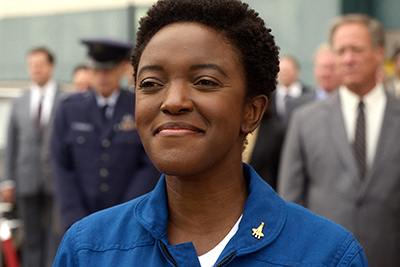 KRYS MARSHALL:   So, when we see Danielle for the first time in season one, she is the youngest in the program. She is the only black girl in this group of female astronaut candidates. She enters the astronaut office and is so shy; she can hardly introduce herself and barely get her name out. So, throughout the course of season one, we see her start to get her sea legs, and into season two, we see her really begin to fight for what she deserves, which is to be the first black woman to command a mission. At the start of season three, we see a Danielle who has now seen the fruits of that labor. Long gone is the girl who was shy and second guessing herself and sort of feeling like an outsider. Now, we're seeing a new Danielle who is really very self-realized. She's much more confident. She's a leader in the NASA community. She's been a commander for many years, and she's really right up there with Ed Baldwin giving him a run for his money.

Do you think that the young ladies watching this see you and Danielle as a role model? And if so, in what way?

Oh, I sure hope so. I really hope so. I don't take myself too seriously, but I take what we do really seriously. I think that representation matters. As a kid, you hear these tropes of like, “you can be anything you want to be” and “whatever you can dream you can be,” but that's all well and good until you actually are in the practice of it. But when you're able to see examples of what it's like, to see that a scientist is not just a fluffy old white dude with the gray mop and a big mustache and a white coat - a scientist looks like me. An astronaut looks like me. So, through television and through storytelling, when we redefine what an astronaut looks like, I think that we help inject into the conversation and into society a shift in what the norm is. So, that way, God willing, there are ten, twelve-year-old kids who think to themselves, “Maybe this is an option for me. Maybe I will take more biology classes; maybe I will major in geology. Maybe I will become an engineer.” That's really exciting for me, and I take that responsibility as a role model very seriously.

It's incredible. I think having a show like this is so important, especially in this day and age…When you prepared for this role, initially, did you speak to any astronauts or speak to someone that was maybe into the sciences, especially female scientists?

I am so lucky that on our show. I get to speak to an astronaut every day. Garrett Riesman was a NASA astronaut through the early 2000s and into the mid 2000s and has been to the International Space Station three times, spent many, many months up there. So, now he is a technical consultant on our show. So, Garrett is at our ready whenever we need him. If I have a question about how to pronounce something, or I have curiosity about the science behind it - what is helium three and what does it do and all these sorts of things - Garrett is right there able to explain it in layman's terms. We've also got Mike and Denise Okuda, who are a team of technical consultants, and they've worked with Ron Moore for many, many years going way back to Star Trek Deep Space Nine. So, they're great at making sure that when I'm in the capsule and I'm pressing buttons or moving the joystick that I'm not just phoning it in because I'm on TV, but really actually knowing this is a pivot, this is a tilt, this is, you know, the gain. These are the different things that you're doing; this is what this movement means, how the ship is moving. So, those guys really helm the ship when it comes to keeping the science of the story on track with real life. So, that way, as a performer, you can just tell the story and know that those guys have got that part covered.

The most rewarding part about playing Danielle is that she really is not one dimensional at all, which I love. Oftentimes, when you see female characters and stories, or people of color in stories, they kind of end up being this sort of very simple, rudimentary cut out. This is the gay person; this is the black person. This is what a black person looks like, what they say and how they talk. So, one of my favorite things about the way that Danielle has been written, and the way that I'm able to play her, is that she's really very three dimensional, very well rounded. [She] has likes and dislikes and shortcomings and makes mistakes. I think our audience will be really excited and also probably disappointed in some of the things that she does throughout season three, some choices that she makes that I personally wouldn't make, some things she says that I wouldn't say. But I love that about her, because that's what keeps her human.

The most difficult part about playing Danielle is, I think, some of my own stuff. It can be really intimidating to come into a world where everyone is extraordinarily intelligent. I mean, some of the folks we work with are like legally geniuses. Then, to have a cast that is operating at such a high caliber of talent, it can be tough to feel like I have earned my place here. I know what I'm doing. It's tough sometimes to trust myself, to feel confident in my own work. So, that struggle, I would say is probably one of the harder parts of playing the role where the character is pretty out of this world.

Without giving too much away, I know we have a ton of great storylines this season, but can we also see any special guest stars or anything like that, that you're looking forward to the audience seeing?

I think our biggest guest star this season is Mars [laughs], great big red planet, this beautiful girl she is. It's funny, I feel like Mars, even though it's a planet, it feels very much alive. That's all I can say without giving too much away. But it is bustling. It is very much a character in this story, just like the human beings that we've known to love and understand. Mars is unpredictable; space is unpredictable, and I think that is the big surprise in the season.

What would you like to say to the younger girls watching you right now? What advice would you give them?

Anything they can do, you can do better. That's just it, and just knowing that the limit doesn't exist for girls, for women, for trans women. Women deserve to be given an equal opportunity to fight to be taken seriously to promote themselves to be paid equally. So, my advice to young girls out there would be, ask for that raise, ask for that promotion, and continue to step in the footsteps of the women who have come before you.
Twitter
BotonSocial por: SocialEmpresa
Category: Interviews