Becoming Elizabeth, which premieres today on Starz, follows orphaned teenager Elizabeth Tudor before she takes the throne of England. The future queen is obviously well known, but the series explores a part of her life that hasn’t been seen before. This helped Alicia von Rittberg to play her own version of the character easier. “It's just your point of view,” the actress told SciFi Vision. “That's all we can do as actresses…I think it was very helpful to play her in her younger years. There wasn't that much comparison, because that part of her life wasn't told before.”

Was it daunting to play such a larger than life historical figure? “I think you want to approach it with all your respect, and you want to do a justice as well,” said the actress. “I am German, and I didn't want anyone British go, ‘Oh, my God, what did you do with our queen?’ So, I think that that I was even more careful and even more considerate taking on that role.” 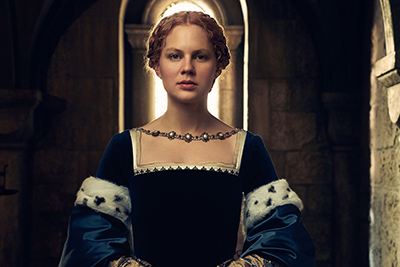 The elaborate costumes really helped her to create the character. “We tried to be 100% accurate on the costumes. I think you can really tell I was literally wearing about six to eight different layers every day. I think, just the time it takes, even though it drove a lot of people mad, it was so helpful to put on different layers of your character. You know, this is a uniform; it's not just a pretty dress…I think wearing a corset as well, it just gives you a certain posture and informs the way you speak and informs the way you hold yourself and walk. So, it was not just a costume; it was it was very special that it was so accurate and helpful.”

To hear more from Rittberg, including about working with Tom Cullen as Thomas Seymour, watch the full interview below, and be sure to check out the series on Starz, and stay tuned for the rest of our interviews for the series.