SciFi Vision | Interviews | Exclusive: For All Mankind's Wrenn Schmidt on What's Next for Margo

Exclusive: For All Mankind's Wrenn Schmidt on What's Next for Margo

For All Mankind is currently airing their third season on Apple TV Plus, much to the delight of fans. This season shows our characters growing and evolving, especially Margo, who is played by Wrenn Schmidt.

During a recent exclusive interview with SciFi Vision, Wrenn teased that we are going to see a more confident, open Margo. “I think [at] the beginning of season three, Margo is probably the most comfortable she's ever been in who she is, and that shows in how much more of herself she shows,” she revealed. She went on to say we will see a lot of growth both personally and professionally, especially now that she has moved up in her career. 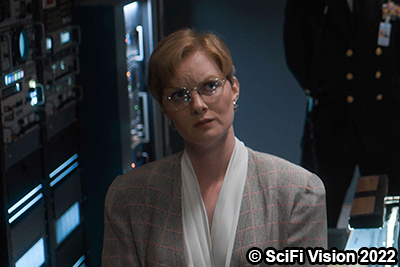 Check out the series now on Apple TV Plus, and read the full transcript below:

SCIFI VISION:  Tell me about the season. How are we going to see your amazing character evolve?

WRENN SCHMIDT:  At the beginning of season three, Margo, with the exception of the president, is at the top of the food chain. There's a really great shot in the lobby of the Johnson Space Center, and it's just the president and Margo, which I think says a lot. But with that, also comes, of course, extraordinary responsibility. Margo has been back channeling information with her counterpart at Ross Cosmos in an effort to keep international tensions cool, rather than where they were almost explosive at the end of season two, but that ends up becoming really complicated and tricky as the season progresses. I feel like that's probably the most exciting part of the season for Margo.

I think [at] the beginning of season three, Margo is probably the most comfortable she's ever been in who she is, and that shows in how much more of herself she shows. It's very clear she lives in the NASA building, essentially. Who knows if she has a house somewhere else. Her piano’s out in the open now; people are used to seeing that in her office…So, she's kind of more open in general, the most open we've probably seen her ever, personally. And professionally, I think there's an ease which comes with having the experience that she has and that she's no longer in a position of having to please men, to be honest. I feel like hopefully that shows in her appearance. So, I think those are kind of the most obvious right off the bat.

Then, as far as how I relate to Margo, after playing her for this many episodes and seasons, I really love her as a character, and in some ways, she feels like a very comfortable fit for me, but I'm also always excited by all of the different things the writers throw at me and all the challenges as well. And as far as sensibility, I'd say maybe the ways in which we're most similar, is I'm a pretty hard worker, maybe sometimes to a fault. I feel like, to my mind, it's about the work, and sometimes the extraneous stuff, to my mind, doesn't feel important, and I know that not everybody else feels the same way, especially when it comes to the world of acting and entertainment.

If you were to write something for Margo, or if there was something you wanted Margo to do in future seasons, what would it be and why, maybe an adventure she hasn't had yet or something along those lines.

I love that Margo is pretty private and the scenes in which you see her kind of out of her element are always really fun for me. So, I loved when Margo was playing piano at the jazz club, and she gets caught by Molly Cobb (Sonya Walger). I love doing the montages. I've joked with the writers about this, but because Margo is such a huge jazz fan, I would always love for it to like suddenly come out that Margo also takes tap classes secretly. I joke with them about that all the time, but I also kind of really wish that that was a reality. I would love to see especially Margo in her 60s in a tap class. So, Matt Wolpert and Ben Nedivi, if you're [reading], Margo should take tap classes.

I would love to see that, because I think that would be a lot of fun; that would be a blast. And who is somebody who want to see guest star on the show in future seasons?

Oh, geez. Oh my gosh. That's such a great question, and also a hard question. Oh my gosh, I would probably faint. Well, no, I don't think it would actually faint. I would just be a ball of anxiety, but if we could somehow get Olivia Coleman now that she has time in her schedule, that would just be an absolute dream…I just have to add two more actresses to that list: Holly Hunter and Allison Janney.
Twitter
BotonSocial por: SocialEmpresa
Category: Interviews