SkyMed, which premiered in the US yesterday on Paramount Plus, follows the lives of flight nurses and pilots who work medical rescue on the air ambulances in Northern Canada. SciFi Vision recently talked to cast members to promote the series.

The stars of SkyMed were given quick crash courses in their respective characters’ fields, according to Natasha Calis, who plays Hayley. “It was really fun,” the actress told the site. “We all had different types of training. As soon as we landed in, in Winnipeg...we had medical training, where we were divided up into the nurses and pilots, so that the nurses had medical training, which was a full day, and the pilots had pilot training...We actually all got to go up in planes, which was really fun, and the pilots sort of sat more at the front and watched what everybody was doing.” 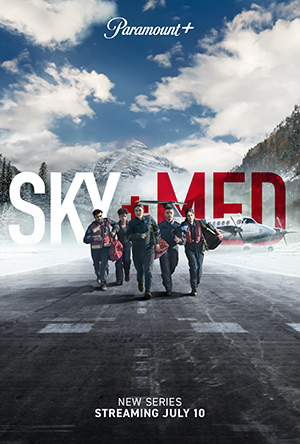 Morgan Holmstrom, who plays Crystal, expanded more on the medical training. “We had an onset EMT as well, who was kind of going through procedures with us right before or the day before,” explained the actress. “There was a doctor that was on set that helped me learn how to suture. I was suturing an orange behind the scenes to try and learn how to do it properly...[I] did a lot of YouTube research for flight nurses. I wasn't sure everything that it entailed for flight nurses. I've only ever shadowed a nurse in a hospital. So, that was kind of new for me.”

“It was kind of like going back to school,” added Kheon Clarke, who plays the role of Tristan. “It was like cramming up months of actual EMT training into a few hours, so that was very interesting. We took a lot of notes, and shout out to medical Steve; he was a onset EMT. He helped me a lot, because I've never done anything like this before. Hopefully, we look like real professional medical professionals. It was a lot of fun.”

Thomas Elms, who plays the character of Nowak also weighed in on the quick training. “I find it's always such an interesting process, because it's all this condensed learning that you have to do in a couple months or a couple of weeks,” the actor told the site. “That's got to be like years’ worth of actual experience...For the plane stuff, I mean, I knew nothing about flying planes when I got to that set, so it was more of a consultation thing. My experience was from playing video games and stuff...There's not much to do when you're midflight, the most exciting parts [and] most dangerous parts of the whole thing are takeoff and landing. That's the most involved...The plane stuff was fun, and it was simple enough, like basic mechanics of it, you get all that in the physics of it.”

“And what was interesting,” added Calis, “is the nurses, and the pilots were kept very separately, our different training. So, the pilots had no idea what we were doing, and we had no idea what they were doing. We would always be briefed before every scene [on] the medical aspects. We would be taught how to pull a syringe or whatever we were doing, and the pilots would be briefed, ‘You're landing. These are the switches that you have to flick. These are the things that you have to do.’ ”

For more from the cast, including their characters struggles and what they learned about themselves from working on the series, watch the full interview below and be sure to check out the new series, SkyMed. The full season is now available to stream on Paramount Plus.