Epix has dropped season two of its hot romantic comedy Bridge and Tunnel.  It’s the summer of 1981 and Jimmy returns from Alaska to find the rest of the gang with one foot in Manhattan, the other back home on Long Island. All six episodes are available now on TV, on demand and online.

SciFi Vision recently sat down with the cast to talk about where their characters find themselves after a one-year time jump.  First up was Sam Vartholomeos (Star Trek: Discovery) and Caitlin Stasey (Reign), who play Long Island’s most frustrating couple, Jimmy and Jill. Are they meant to be or is it time to move past their high school romance? 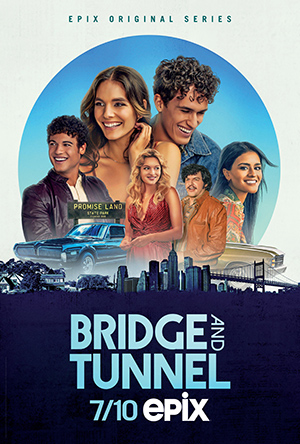 “You don’t think it frustrates us?” laughed Vartholomeos. “It frustrates the hell out of me, that’s all I’ll say.” Getting serious, he added, “They’re both really passionate about what they do, and these are years that you’re trying to figure out what that is exactly, who you are, what you really, really want. I think they both went and did exactly what they said they’d do, putting them in the positions we find them in in season two.”

For the record, Vartholomeos thinks they can make it work, “but getting there is so frustrating!”

Stasey also likes the couple’s chances.  “Maybe they’re the one out of five billion who can make a relationship from their teenage years work,” she said, sounding hopeful. “Sometimes you hear about it, people who were in love from 16 to 96, and maybe this is them. Maybe this is the one time.”

Next up, we spoke with Jan Luis Castellanos (13 Reasons Why, Marvel’s Runways) and Isabella Farrell (The Good Fight). Mikey and Stacy are on separate paths this season, pursuing their careers and looking for love with varying success. Castellanos described Mikey’s arc as “Growing pains. He’s got to find himself; enough of trying to please people and make other people happy. He’s got to do it for himself this time.”

Maybe the reason these two didn’t work is because Stacy is his polar opposite. “I love the fact that she’s unapologetically herself, and she isn’t trying to please someone else. That’s truly an honor, to get to play such a strong woman on TV.”

It wasn’t long ago that Farrell and Castellanos were young artists trying to make it in the big city. They told us a bit about drawing on that experience in Bridge and Tunnel.

While most of the crew struggles to launch their careers, Genie (Erica Hernandez, Swipe Monster) and Wildfire are finding some success on the NYC music scene thanks to manager Nick (Brian Muller, The Deuce).  After watching Tammy (Gigi Zumbado, Criminal Minds) sit in on drums at a big gig, we couldn’t wait to ask the three how their characters navigate a potential change in the lineup. Watch the video below!

Be sure to check out season two of Bridge and Tunnel, now available on Epix.
Twitter
BotonSocial por: SocialEmpresa
Category: Interviews