Based on the bestselling novel by Alex Scarrow, Last Light, which premieres today on Peacock, follows petro-chemist Andy Yeats (Matthew Fox), who on a business trip to the Middle East, finds himself in the middle of an international crisis and separated from his family when the world’s oil supply becomes unusable.

Director Dennie Gordon, who recently talked to SciFi Vision in an exclusive interview, spoke to some of the challenges of bringing the series to television. “There were many challenges, but, of course, that's what makes us excited,” the director told the site. “Part of it was finding these locations and being able to make this an international show on on our rather small budget; that was tricky. The cast came together very quickly. I was thrilled, because I got my first choices everywhere, but I think it was [challenging] operating in a foreign country, directing in several different languages. We had German speakers, we had Czech, we had French, we had Arabic; we were everywhere. [It was] just a lot of pulling all these people together. There was just so much collaboration…Bringing all these people together, it ended up feeling like behind the scenes we were as global as our story.” 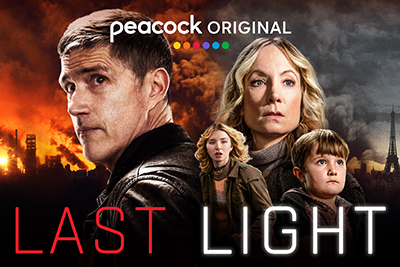 Gordon also revealed that due to COVID, they had to film some scenes with two people when they were actually in different locations, but they never stopped shooting.

Regardless of the challenges, luckily, they were able to accomplish everything they set out to do. “I don't have any regrets about anything we left out,” said Gordon. “I’m very happy to be able to say that.”

For more, watch the full interview below, and be sure to watch Last Light, now available on Peacock.