Film Review: Terrordactyl - Get Ready to Kick Some Past - Available 6/14

Terrordactyl, directed by Don Bitters II and Geoff Reisner and written by Bitters, follows two friends Jonas (Jason Tobias) and Lars (Christopher John Jennings) who are bored of their gardening jobs. Jonas, who's not great with women, is always dreaming and creating new tools by combining and destroying old ones, much to Lars' annoyance.

One evening while talking to a bartender, Candice (Candice Nunes), Jonas finds out about a meteor shower. According to Candace, the meteorites could be worth a lot of money. 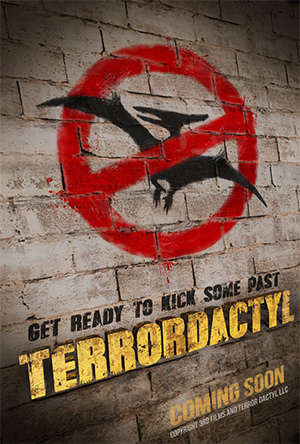 Broke and badly crushing on the bartender, Jonas goes in search of the meteor and brings Lars along in the hopes of them getting rich.

After finding and bringing back a meteorite, which may be more than it seems, they become the target of pterodactyls, extinct flying bird-like dinosaurs, as they destroy Los Angeles.

With the help of Candice, her roommate Valeri (Bianca Haase), and ex-marine Sampson (Jack E. Curenton) who seems a bit unstable, but has an armory, they try to escape the creatures and find a way out before becoming dinner.

Although it stars a bit slow, once Terrordactyl hits its stride, it goes full stop. It's a cross between films like Tremors and the more recent Sharknado series. It's a fun ride, but doesn't take itself too seriously. 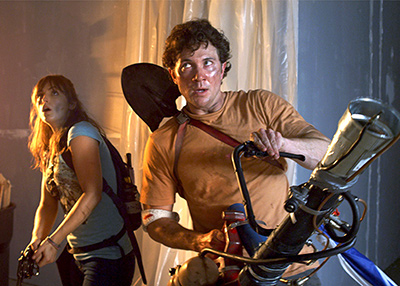 For a film of its size, the effects are pretty well done, in fact at times better than those of companies like The Asylum. They did a great job of inserting the birds into the live action with the actors; it's believable and works. There're also of course other elements like explosions and such peppered throughout. 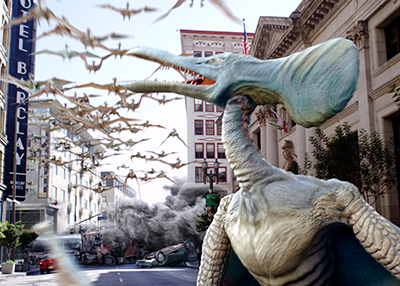 The action scenes are quite entertaining, from a car chase to Jonas barbecuing birds, and are backed by a few comedic scenes.

The characters are fun as well, and I enjoyed how the heroes weren't typical. The main star, Jonas, didn't start out brave and definitely not suave, but helped solve problems with his brain and his kooky contraptions like his leaf blower flame thrower.

If you enjoy these types of sci-fi action flicks, be sure to check out Terrordactyl, which comes out tomorrow On Demand and on Digital HD.
Twitter
BotonSocial por: SocialEmpresa
Category: Digital Reviews