In The Huntsman: Winter's War, which serves as both a prequel and sequel to 2012's Snow White and the Huntsman, Queen Ravenna (Charlize Theron) is as evil as ever, doing whatever she has to, including killing her current husband to expand her empire.

Her little sister Freya (Emily Blunt) has shown no signs of magical ability like her sister. Ravenna thinks it is because she is weak. She is pregnant and in love with a man who has already been promised to another. Naive, Freya believes that everything will work out, but when a tragedy deals her a great loss, her heart freezes and unleashes in her an icy power.

Freya becomes bitter and as evil as Ravenna and just as powerful, creating her own kingdom by taking over others. Ripping children from their parents, she outlaws even the idea of love, and creates an army of Huntsmen to help her take over other kingdoms to expand her rule. 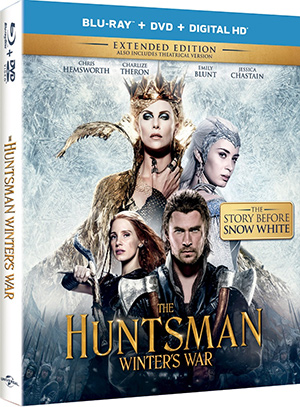 Her best Huntsmen, Eric (Chris Hemsworth) and Sara (Jessica Chastain), who have known each other since childhood when they were taken, as adults fall in love. They plan to sneak away, but Freya discovers their disloyalty and things do not end well.

This is where in the timeline the original movie takes place, with Eric heartbroken over Sara and agreeing to find Snow White when Ravenna promises to return his dead wife.

The film picks back up years later, after Ravenna has been defeated. Snow White has felt evil come from the mirror and wants it taken away where it won't hurt anyone. Eric is dispatched to find the mirror which has been stolen on its journey, and take it to where it can do no more harm.

Of course it isn't long before Freya finds out about the mirror and wants it for herself.

Can Eric and the Dwarves stop Freya's wrath as well as Ravenna from returning to power?

The Huntsman: Winter's War is advertised as a prequel to the original film, Snow White and the Huntsman. I was surprised to discover that it was a sequel as well, and wasn't sure how that was going to work. You don't have to watch the original film before this, but I suggest that you do, as things will line up a bit better. It had been years since I saw the first film and was slightly confused at the beginning.

The film does not focus on Snow White at all. In fact she is only in the movie for a few seconds and you never see her face. The story focuses on Eric's journey to stop the sisters, as well as the love story between him and Sara.

In my opinion, as much as the film still contained base elements and characters from the first film, it seemed more like a spinoff then part of the same story to me. The tone was different, with a lot of lighthearted moments and comedy, more so than I remember from the original. It also had a different feel in the sense that the original had more of that fairy tale feeling to me. Also in this movie the villain is not quite as much at the forefront as in the original. Freya is powerful, and Blunt holds up as the evil ice queen, and Theron is phenomenal once again, but it was more about the love story between the two main characters and their journey, whereas Ravenna was more in the forefront and more deeply developed in Snow White.

The visuals were just as stunning as the original, and I loved the detail from the forest creatures to the ice, but they weren't focused on as much, letting more of the story shine through and weren't as in your face.

It wasn't just the special effects and sets that were incredible, the costumes were as well. The main characters' costumes are gorgeous and well developed, especially the two sisters, who each retain their style throughout costume changes. Ravenna is always in gold, because she is part of the mirror now, and Freya is always depicted as silver ice. I also loved how they kept ravens as part of Ravenna's look and used owls for Freya.

The overall script was enjoyable, as were the performances by all. The cast meshed well together and the film moved quickly. I especially enjoyed the performances by the dwarves, Nion (Nick Frost) and Gryff (Rob Brydon), who created most of the comic relief. Chastain also brought a lot to the film, and was a strong female lead, and Blunt was brilliant as well, but as with the first film, the standout was really Theron.

Extended Version [2:00:10] - You can choose whether to play the theatrical or extended version, which has about six minutes of additional material added, and whether or not to play the commentary.

Feature Commentary - This can be enabled for either version of the film through the bonus menu. The director talks about filming and production aspects of the film. In the extended version he explains why the extra scenes were cut.

Deleted Scenes with Commentary by Director Cedric Nicolas-Troyan - You can play the scenes all together or separate, with or without commentary.

* Frey Says Goodbye to Ravenna [0:50] This short clip is of Freya leaving in
mourning.

In the commentary, the director explains this reveal of Freya as the ice queen
was not dramatic enough.

* Young Eric and Sara Fight [2:20] - In this scene, Freya has her two best young
huntsmen fight each other, but chastises them for having mercy. She tries to pit
them against one another, saying only one of them will be by her side when they
grow up.

The scene was cut because it was too long and also because they weren't settled
on Freya's look yet.

* Eric Finds Passage to Hidden Forest [3:18] - Eric, Sara and the dwarves walk
in circles until they eventually find a fake 'wall' in the forest.

The scene was cut because it was too long, but contains a funny line between two
of the dwarves. Also, the digital effects of the passageway were never completed
since the scene was cut early on.

The director felt the scene slowed down the film, and also, Freya was losing
confidence at this point and becoming less cold, so the act of winning went
against that. Most of the conversation was kept and the chess part was removed.

Gag Reel [9:43] - In addition to the normal flubs, laughing, fooling around, and cussing (which is bleeped), there is also a segment at the beginning on them having to stop repeatedly from planes flying overhead.

Winter's Vistas: The Making of The Huntsman: Winter's War:

* Two Queens and Two Warriors [7:22] - The director talks about it being his
first film and about casting. He talks about Ravenna, Freya, Sara, and Eric and
the characters' complexities. The actors talk about working with each other.
Other things, such as fight choreography, are discussed.

* Meet the Dwarves [8:10] - The director and executive producer talk about the
dwarves, and the actors talk about working with each other. They talk about
things such as the characters' banter, the way they had to walk, ways they were
made to look small, and their characters falling in love.

* Magic All Around [8:44] - The director, visual effects supervisor, actors, and
others talk about different visual effects and how they are created. The main
pieces focus on are Freya's ice and the ice wall, Ravenna's spikes, dead
goblins, motion capture, and the mirror.

* Dressed to Kill [6:03] - This feature is of the producer, costume designer, and
cast talking about the costume designs and creation for the four leads, including
other props like Freya's owl mask and Revenna's headdress.

* Love Conquers All [5:58] - Suprisingly this feature has nothing to do with the
love story of the film. This feature is of the director and cast talking about the
fun they had on set and how much they enjoyed working with each other. 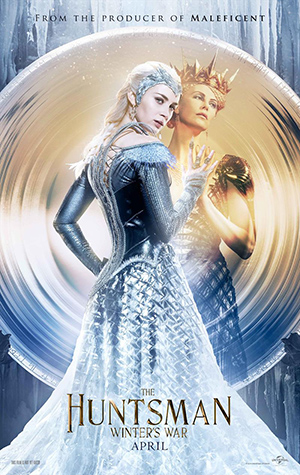 The Blu-ray comes into the normal blue clamshell case with cardboard slipcover. It includes the DVD version, a code for the Digital HD version (extended cut only for UltraViolet or iTunes), with an ad for the official game on the reverse, and a code for a free Universal film with an ad for The Wizarding World of Harry Potter at Universal Studios Hollywood on the reverse.

The movie is front loaded with trailers for Neighbors 2: Sorority Rising, Free State of Jones, April and the Extraordinary World, Mother's Day, and The Wizarding World of Harry Potter at Universal Studios Hollywood. Annoyingly, this pops up every time the disc plays, even if you don't take it out. I also found out that if the player times out it also does not save your place if you are watching a bonus feature.

The Huntsman Winter's War is a fantastic film with great bonus features that is worth buying. You can watch this version on its own, though I do recommend watching Snow White and the Huntsman first to get the full story.