Action star Matt Damon returns after nearly a decade as the title character in the fifth installment in the Bourne franchise, Jason Bourne. Still in hiding after learning his life was a lie and faking his own death, Bourne is contacted by former CIA operative Nicky Parsons (Julia Stiles) after she finds some important information about his past while hacking the CIA. She reveals to Bourne that his father was heavily involved in project Treadstone. There is also information suggesting that the CIA is starting a new program worse than Treadstone, called Ironman.

Coming out of hiding puts Bourne in jeopardy when his location is discovered by CIA director Robert Dewey (Tommy Lee Jones) with the help of analyst Heather Lee (Alicia Vikander). Lee attempts to bring Bourne in, while Dewey works behind her back to have him killed, sending The Asset (Vincent Cassel) after him. 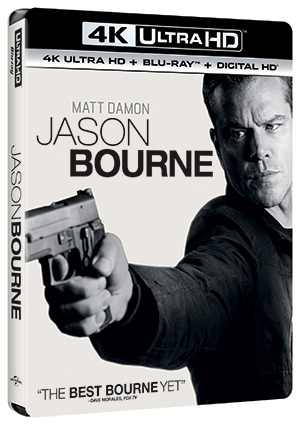 As with the previous installments, Jason Bourne is full of edge-of-your seat action and tense moments that don't let up. The film moves quickly as Bourne tries to find the truth while escaping his enemies.

You don't have to see the previous films to understand most of the action, though some of the backstory may be confusing, even if it's not integral to the plot.

There are tons of action sequences, from fight scenes to stunts, and all are thrilling to watch. The film is shot beautifully and most of the effects were done practically rather than digitally, making for some exciting chase scenes featuring Bourne and his enemies.

Even after so many years, Damon still brings the same intense energy and stamina to the franchise as in previous films.

Other actors that stand out are Jones, who is a lot of fun to watch in the villainous role, Vikander, who's character is sometimes hard to figure out, and Stiles, who it was great to see return. The dynamics of all of the cast helped make the film what it is.

If you like the Bourne franchise, you won't be disappointed with the newest edition.

Bringing Back Bourne (8:15) - This behind-the-scenes feature is introduced by Matt Damon and talks about the cast and crew waiting until the right time to reunite to bring back the franchise. Damon talks about working with co-writer/director/producer Paul Greengrass, and the cast, including Damon, Stiles, Vikander, and Jones, and the crew, discuss how technology has changed since the last film and how they have integrated those changes. They also discuss the filming style and the popularity of the franchise, and Damon touches on his fight training. The feature is interspersed with behind-the-scenes footage. Executive producer/co-writer/editor Christopher Rouse, producers Frank Marshall and Gregory Goodman, and director of photography, Barry Ackroy, are also featured.

Bourne to Fight: These features are a look behind the making of some of the major fight sequences and includes behind-the-scenes footage as well as interviews from the cast and crew, including Damon, Greengrass, boxing trainer Matt Baiamonte, stunt coordinator Gary Powell, fight coordinator Roger Yuan, and more. These can be played separately or together.

* Bare-Knucle Boxing (7:55) - This feature focuses on Damon, who again
introduces it, preparing for the bareknuckle fights. Both behind-the-scenes
footage and training footage is shown. The cast a crew discuss the two
bare-knuckle fighting sequences. The highlight is the underground fighting
scene, where Damon works with pro fighter and stunt performer Brian
Nickels. They discuss the choreography and more.

* Close Quarters (4:27) - This one focuses on the fight between Damon
and Vinzenz Kiefer, who plays Christian Dassault. Art director Mark
Scruton talks about the environment of the set, and the actors, fight
coordinator, and executive producer Christopher Royce talk about Bourne
fighting with found objects in the scene.

* Underground Rumble (5:59) - The fight scene between Bourne and
The Asset is discussed by cast and crew. Topics include the choreography
and staying true to the style of fighting from the franchise. Another topic is
using weapons found in the environment and how rubber blades and digital
knife tips are used. 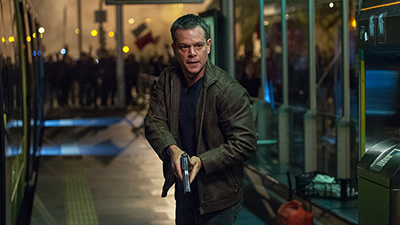 The Athens Escape (5:37) - The bike and car chase is discussed, again, introduced by Damon. The cast and crew talk about pulling off the stunts and how they did it practically rather than digitally. Some topics include ways they kept the actors and stunt performers safe, creating the police bike, and bits where they used digital face replacement for Damon. Second unit director Simon Crane and picture vehicles supervisor Graham Kelly are also featured.

* Convention Chaos (6:36) - Damon introduces the feature that talks
about filming inside the hotel and convention center. The cast and crew
discuss their unprecedented access to the Vegas Strip. The vice president of
hotel operations at the Aria, Paul Berry, talks about the parts of the casino
they used and how they couldn't just shut down everything because of
guests. They also talk about creating the convention audience scene with
1600 extras, and art director Cat Maxey discusses how they used some
real and fake vendors to create the convention.

* Shutting Down the Strip (8:24) - Damon introduces the inside look of the huge
car chase on the strip. The talk about how they were able to close down a 1/2
mile section of the Las Vegas Strip to do the chase. They talk about the stunt
performers and rehearsing different parts with the vehicles. Some highlights
include firing cars at the SWAT vehicle, the SWAT vehicle ramming through cars,
and how they got the car to land on top of the SWAT vehicle. They also discuss
smashing stuff inside the interior of the hotel.

The 4K Ultra HD/Blu-ray version I received includes both versions of the film, one on each disc, as well as the digital copy code (available in UHD). The 4K version features High Dynamic Range for brighter and more lifelike color. There is also a slip cover in addition to the normal black clamshell case.

The disc is front-loaded with trailers for The Great Wall, The Girl on the Train, Snowden, Anthropoid, and Roger Corman's Death Race 2050. 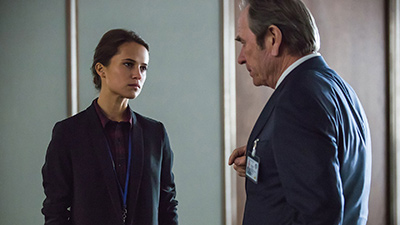 Jason Bourne is a great addition to the franchise and is thrilling and fun to watch, whether you are already a fan or not. I do recommend seeing at least the other films featuring Damon's character, but you can enjoy it either way.

Although there aren't a whole lot of extra features, the ones the set does include is a nice collection of them, which really adds to the value of the film. They really paint an excellent picture of all the work that went into making the movie, and it is enjoying to see all the behind-the-scenes footage. I definitely recommend this set.

Behind-the-scenes look at the motorcyle stunt from Jason Bourne