Published: Tuesday, 05 March 2019 12:28 | Written by SciFi Vision
Warner Bros. Home Entertainment provided me with a free copy of the Blu-rayTM I reviewed in this Blog Post. The opinions I share are my own.

Two generations before the planet was destroyed, Krypton tells the story of Seg-El (Cameron Cuffe), Superman’s grandfather. After Seg’s own grandfather (Ian McElhinney) is killed for treason for believing in a threat from another world, their family is stripped of their title and rank.

Seg grows up with his parents in the lower class of the planet in Kandor City, with a corrupt government, getting into bar brawls to make extra money. On top of that he’s in love with Lyta-Zod (Georgina Campbell), who is to be bonded to someone else.

When he stops a terrorist and is offered a rise again in rank as part of another family, his parents urge him to accept and make a better life for himself. However, everything changes when he is approached by the time-traveler Adam Strange (Shaun Sipos). 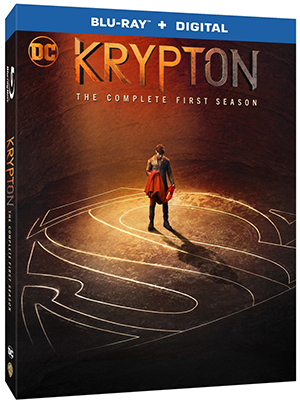 Seg comes to learn that his grandfather may have been right when Strange, who’s from the future of planet Earth, tells him about the future destruction of Krypton as well as Earth’s hero, his future grandson, Kal-El.

Seg must decide whether to save his planet or the fate of his grandson, all while stopping the Collector of Worlds, Brainiac (Blake Ritson).


Krypton is a unique take on the Superman story, as it takes place well before Kal-El is ever born or becomes Clark Kent. I wasn’t sure what to expect going into the series, but the story fairly quickly pulled me in, although I feel a darker tone may have made it even better.

The writing is fantastic and the design of the show is beautiful. The visual design especially of the Fortress of Solitude and the upper city fits really well from what one would expect it to be if they are at all familiar with the super hero’s story, and it is spectacular. I also really like the unique look of the Voice of Rao.

The cast was well chosen, and Cuffe is really endearing as the ruffian-turned-potential-hero. He shares great chemistry with Campbell as Lyta.

The story may be based on the iconic characters by Joe Shuster and Jerry Siegel, but the series is its own refreshing story. It’s sure to be enjoyed by both seasoned fans and new viewers alike.

Krypton: 2017 Comic-Con Panel [22:52] - Hosted by Geoff Johns, Chief Creative Officer of DC Comics, the panel features star Cameron Cuff and showrunners Damian Kindler and Cameron Welsh. They talk about things such as mythology from the Superman universe, characters coming to the show, special effects, and more.

Deleted Scenes - The scenes are in one feature (for each disc), but the disc insert tells which episodes they are from, however not how many for each.

Bringing the Home World to Life [17:05] - The crew, including the showrunners, people in the prop department, visual effects, production design, and more, talk about creating the world of the show, including practical and digital sets. They talk about things such as the design elements that can be seen throughout the show, creating all the details, and how the world is to some extent built upon worlds that others have created for the universe in the past.

Specific sets they talk about are the tribunal chamber, the genesis chamber, the Rankless district, the Rozz Military Base, and the Fortress of Solitude. A lot of behind-the-scenes filming as well as artwork, props, and parts of production are shown. Star Cuffe also talks about working with practical sets.

A Lost Kingdom: Life on Krypton [22:39] - Cast and crew talk about the power structure of Kandor and the inequality, how they have dwindling resources, the different aspects of society, and more. The feature also talks about themes of the show and other metaphors and how it all relates to situations in our own world. They also talk about iconography and the meaning of the sigils. The feature is interspersed with clips from the episodes.

Gag Reel [3:23] - This includes the normal mistakes and fooling around on set.

Disc one of the blu-ray set contains five episodes and two special features, the 2017 Comic-Con panel, and deleted scenes.

Disc two contains the second half of the episodes and the rest of the bonus features, as well as more deleted scenes.

The discs are packaged in the normal blue clamshell case with the edition of a slip cover.

Inside is a double-sided sheet with the disc contents, including special features and descriptions of each episode, which is really nice and something all discs should have.

Also included is a code for the digital copy redeemable through Warner Brothers that will work with UltraViolet.

Though not packed with a lot of special features, the ones that are included are really well done and cover a lot of the aspects of production as well as showcase the excellent visuals of the series. If you are a fan of the show or a new viewer, the set is definitely worth a buy.
Twitter
BotonSocial por: SocialEmpresa
Category: DVD Reviews