Captain Marvel is an Entertaining Addition to Your Marvel Library - Out Now on 4K Ultra HD, Blu-ray, & DVD

At the beginning, Danvers, who goes by the name Vers, has been learning to control her powers and training as a member of the Kree military team known as Starforce, under the command of Yon-Rogg (Jude Law). When a rescue mission goes awry, she finds herself back on earth, and realizes she might have been there before.

While trying to find answers to her past, as well as stop the Skrulls, the shape-shifting alien race who followed her to earth, she runs into Nick Fury (Samuel L. Jackson). The two of them must work together to stop the alien threat and protect planet Earth. 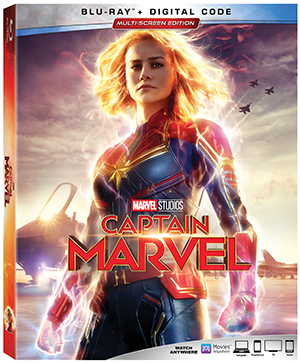 The film’s tone is more serious than some of the recent MCU films, but it does have its comedic moments. Larson and Jackson make a great team and are a lot of fun to watch. Ben Mendelsohn as Talos also adds more great moments. I also really loved all of the 90s music and references.

You don’t have to have seen other Marvel films in the franchise, as this is stand-alone, but there are a lot of moments that are impactful and often funny, because they are references to other films.

The storyline itself is a little slow at first, but quite entertaining, though I think to those who are not at least familiar with these kinds of movies, it may drag a bit more at the beginning. Once it gets into the meat of the film, however, it flies along.

The visuals are fantastic and really add to the experience. I also was pleased with the creature design of the Skrulls.

Overall, Captain Marvel is a fine addition to the MCU franchise. If you are a fan of Marvel, you will definitely want to add it to your collection. If you are new to the game, I still suggest you take a chance, especially as it’s stand-alone.

* Becoming a Super Hero [6:40] - This featurette is about the facets of Captain
Marvel as a hero, as well as what Brie Larson brings to the role. Larson herself
talks, as well as directors/screen writers Boden and Fleck, and Kevin Feige. Also
discussed is Larson’s visit to the Air Force and getting to fly in a F16 jet to learn
more of what Danvers would face. The actress also touches upon her training.

* Big Hero Moment [3:31] - Larson talks about her character being an inspiration
and how Danvers refuses to give up. Executive producer Jonathan Schwartz and
Feigealso weigh in. Also mentioned is how the film sets the stage for and
influences a lot of what happens in the other films of the MCU.

* The Origin of Nick Fury [3:34] - The film is not only an original story for Carol
Danvers/Captain Marvel, but also for Nick Fury, and therefore it’s also kind of an
MCU origin story. Fury introduced a lot of the important characters. Besides
Larson and Samuel L. Jackson himself, other actors from the MCU are shown
talking about the character, including Robert Downey Jr., Chris Evans, and Chris
Hemsworth.

* The Dream Team [2:44] - Members of the cast and crew talk about working
with Boden and Fleck. There are also some behind-the-scene clips of Larson
“flying.”

* The Skrulls and the Kree [3:32] - The cast and crew talk about the two
different races and a bit about their mythology and how they were inspired
by the comics. Ben Mendelsohn also talks about playing Talos/Keller.

* Hiss-steroidal Cat-titude [3:23] - Done to look like an older film, the cast and
crew talk about casting and working with the cat that plays Goose, Reggie.
Christopher Townsend, the visual effects supervisor, also weighs in. It’s
mostly done in a comedic way.

* “Who Do You Admire Above All Others?” [1:52] - Yon-Rogg visits the
Supreme Intelligence, who is not happy with the way things have gone.

* Starforce Recruits [2:02] - Yon-Rogg lectures students on the dangers of
the Skrulls and their mission to defend against them.

* Heading to Torfa [1:19] - Vers (Danvers), Yon-Rogg, and the other
members of Starforce talk before they leave for their mission.

* “What, No Smile?” [1:15] - In an extended scene, when Vers meets the
male biker, she scares him into giving her his motorcycle, jacket, and
helmet, before she speeds off.

* Black Box [1:00] - Director Keller tries to track Vers and Fury after
they’ve escaped in the jet.


Sneak Peeks [3:10] - These include a trailer for Marvel Rising as well as advertisements for mobile games, including Marvel Strike Force, Marvel Future Fight, Marvel Puzzle Quest, and Marvel Contest of Champions.

The disc is also front-loaded with the same previews as well as an ad for Captain America: The First Avenger in 4K at the beginning.

* Journey into Visual Effects with Victoria Alonso [7:20] - Co-president of Marvel
Studios, Louis D’Esposito, talks about bringing visual effects producer Victoria
Alonso to meet with Kevin Feige and Jon Favreau to discuss Iron Man. She talks
about also getting a co-producer credit and how they told her there would be
more films. Alonso discusses visual effects on many of MCU films, from using new
technology, to creating completely CG characters such as Rocket (Bradley
Cooper) and Groot (Vin Diesel), as well as motion capturing their facial
expressions, which they also did for Thanos (Josh Brolin). She also talks about
trying to use practical effects when they can. Lastly, she discusses the de-aging,
which they used much more in this film, specifically on Fury, and to a lesser
extent, Coulson. Throughout, clips of other MCU films are shown.

* What Makes a Memory: Inside the “Mind Frack” [4:36] - Boden and Fleck talk
about storyboards and previs with the scene from the film when the Skrulls are
going through Ver’s memories. Larson and fight choreographer, Walter Garcia,
talk a bit about her training. Lastly, they talk about creating the style of the
memories and other bits in the “mind frack.”


Packaging:
Unfortunately I was only given the Blu-ray edition to review, but it’s still a nice set. It comes in the normal blue clamshell case with the Blu-ray and DVD discs. Also included is a sheet with the free digital HD code for the film, which can be redeemed via Movies Anywhere, and information on Disney Movie Rewards points. On the flip side is an ad for Movies Anywhere. There is also a sheet with information on the Disney Movie Club, which shows Marvel films on the reverse.


Final Thoughts:
Although not my favorite of the MCU films, Captain Marvel is very enjoyable and an excellent addition to your collection. There are also many bonus features included to make the set have an even greater value.


For full specs of the film, please be sure to also check out the official press release.

Bonus Clip: We Need You