Blu-ray Review: The Dead Don't Die is Dead on Arrival

The Dead Don’t Die takes place in the small town of Centerville when strange things start to happen. Polar fracking causes the earth’s rotation to change and the hours of daylight to shift.

Chief Cliff Robertson (Bill Murray) and Officer Ronnie Peterson (Adam Driver) are called in to investigate a dispute when farmer Frank Miller (Steve Buscemi) accuses Hermit Bob (Tom Waits) of stealing his chickens. Animals behaving abnormally is only part of the changes coming to the town.

Back at the station, they meet up with Officer Mindy Morrison (Chloë Sevigny). A local alcoholic’s body (Carol Kane) sits in a cell, waiting for the peculiar new undertaker Zelda Winston (Tilda Swinton).

When bodies start rising from their graves and two of the women who work at the local diner are killed, Robertson and his officers must investigate the bizarre murders and try to navigate their way through the rising zombie apocalypse. 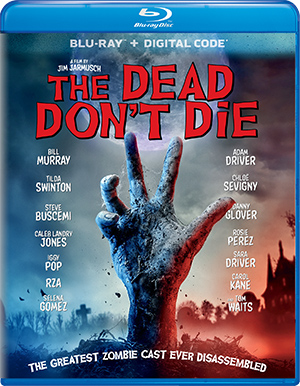 With such popular and talented actors, I was excited to watch the film; the trailer made it look really fun.

I was sadly disappointed. The first half of the film dragged as the plot was set up, and I didn’t find myself laughing at all until more than an hour into the film, which was only the odd chuckle here and there. It’s one of those movies you expect will get better but never quite does. There is a message behind it all to our current society, but it barely even comes through.

The humor of the movie is very dry and if you are a fan of the actors and this kind of film, you may enjoy it, but I found it only to be a waste of time. It was obviously made to poke fun at the zombie genre, but to me most of the jokes felt flat. It could have perhaps been better as a silly film more like Sharknado or such, but most everyone played it serious, straight, and emotionless.

Probably out of everything the best part was Swinton with her Scottish accent, samurai skills, and other eccentricities, and that’s only a small part of the movie.

A lot of the atrocities are due to the script. It’s just not funny. The explanation of why everything is happening is almost nonexistent, and there is not much in the way of plot. Worst of all, the characters move about the film with no plans of escape and only a handful of brain cells between them. Driver’s repeated line of how it’s “not gonna end well” pretty much encapsulated my thoughts through most of the movie. That’s not even to mention the crazy scene towards the end that seemed like the writer had no idea what to do and just threw his hands in the air feeling that if you were still watching it, you’d accept anything thrown at you.

I think this movie is one of those that people are generally either going to love it or hate it. While it did have its moments, I would only recommend it if you have nothing else to watch or are a serious fan of the actors. There are quite a few cameos; just don’t expect much. I tried really hard to find redeeming qualities in the movie, but they are few and far between.
Special Features

Bill Murray: Zombie Hunting Action Star [1:21] - This feature is a short interview with Bill Murray who talks about typecasting.

Stick Together [2:48] - Producers Carter Logan and Joshua Astrachan and cast members talk about making the film and about working with Director and Writer Jim Jarmusch.

Behind the Scenes of The Dead Don’t Die - There is an option to play all or to watch them separately.

* Zombie Tai Chi [0:55] - The zombies’ makeup is touched up as they perform
Tai Chi poses.

* Finger Food [0:22] - A zombie eats something that doesn’t even remotely look
like what it should.

With a film with such a high caliber cast, one might expect there may at least be some entertaining bonus features, but they would be wrong. The features are so short they really don’t add anything. The longest is just the kid zombies growling, and it must be for sound only, because some of them are smiling. The bonus features are even more of a disappointment than the film.
Packaging

The film comes in the normal blue clamshell case with a single disc for Blu-ray. Inside is a paper with a digital code for the film with an ad for other Focus Features films on the flip side.

The disc is front loaded with trailers from Little, Ma, and El Chicano.
Final Thoughts

The film boasts a lineup of actors that make you expect the film to be so much better. If you plan to watch the film, I at least suggest waiting until it comes to television. The disc offers next to nothing in special features for me to find a reason to suggest it, except for the diehard fans of this kind of film.
Twitter
BotonSocial por: SocialEmpresa
Category: DVD Reviews