Black and Blue, which is available now, is an action-thriller that follows rookie cop Alicia (Naomie Harris) after she witnesses a fellow cop kill a drug dealer, and it’s recorded on her body camera. Fearing for her life and wanting to do the right thing, Alicia runs, intent to take down the dirty cops. However, with no one wanting involved and not knowing who to trust, she teams up with the reluctant Mouse (Tyrese Gibson) to escape criminals looking for revenge for the drug dealer’s death, as well as the corrupt police who will stop at nothing to get the footage. 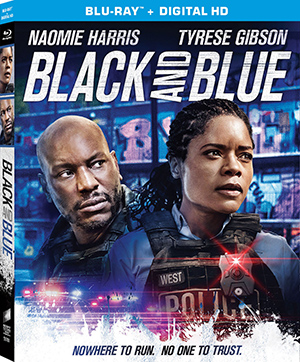 The film is very tense and edge-of-your-seat. It does a fantastic job of making the viewer feel isolated, as no one will even give Alicia the time of day. Who do you go to when the people who should be on your side aren’t, and every member of the community turns you away, sick of police harassment and doing nothing when they are in need? Even with Mouse’s help, danger is closing in from all sides.

Both Harris and Gibson were terrific in the film and made a great team. They went from having nobody to only each other to trust, and they were excellent on screen together.

The script itself was well-written, though we don’t get a lot of backstory on really anyone but on Alicia; however, it doesn't deter from enjoying the movie.

The movie also had a lot to say about how color still divides some people, and it can run thicker than blood. The problem is, it doesn’t completely hit home, as the film focuses more on the action than the moral dilemmas and character drama.

Still, the movie is exciting and kept me entertained throughout. It’s well worth a watch. If you are looking for a good action-thriller, I recommend Black and Blue.

Most are too short to have any purpose, but “Studio” added some character insight.

Line of Fire [4:02] - The director, Deon Taylor, and performers Harris, Gibson, and Frank Grillo talk about the action and how important the body camera is to the film. Camera operator, Peter Rosenfeld, and Glenn Gainer, the executive Vice President of production at Screen Gems, also weigh in.

Be the Change in the Big Easy [3:44] - The cast and crew, including the production designer, Frank J. Zito III, talk about filming in New Orleans and how using it as a backdrop is important to the story. Harris and Gibson also talk about their roles.

Packaging:
The Blu-ray movie comes in the normal blue clamshell case; there is no DVD version. Also included is sheet with a digital copy code for Movies Anywhere. On the flip side is an ad for Sony Rewards that tells you that you can get a free digital movie with every five eligible discs purchased.

Final Thoughts:
Overall, the movie is worth watching and will be appealing for an action fan. There’s also enough meat to the story to balance it out, so it isn’t all just action and violence. If you want to see the film, the set is worth a buy, but not for bonus features alone, as there are only a couple, and they aren’t very in-depth.
Twitter
BotonSocial por: SocialEmpresa
Category: DVD Reviews