Disney’s Frozen II, the sequel to the 2013 3D computer-animated film Frozen, was recently released on digital and in physical versions, including 4-K Blu-ray. The film features returning directors Jennifer Lee and Chris Buck, as well as songwriters Kristen Anderson-Lopez and Robert Lopez and composer Christophe Beck. The movie sees the return of all of fans’ favorite characters, including Queen Elsa, voiced by Idina Menzel, her sister Anna, voiced by Kristen Bell, Kristoff, voiced by Jonathan Groff, and of course the lovable magical snowman, Olaf, voiced by Josh Gad, and Sven.

Three years after the first film takes place, after Elsa hears a mysterious voice calling to her, she accidentally awakes the elemental spirits. When the kingdom of Arendelle is threatened, Elsa and her sister, along with their friends, leave for the Enchanted Forest to follow the voice. While trying to uncover and understand the source of Elsa’s powers, the sisters will not only learn more about the origin of her powers, but also the truth about what happened to their parents. 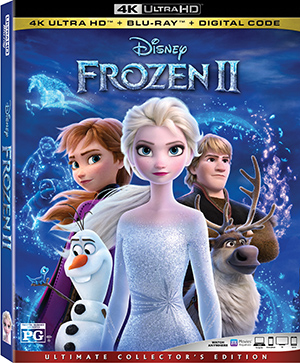 The entirely new story of the sequel is very engaging for both children and adults. Themes of the sequel deal with the inevitability of growing up and things changing, and it feels geared towards an older audience than the first film.

The story surrounding the power of nature and the four elements, which was inspired by Norse and Scandinavian myths, I found very interesting, and the story of the Northuldra tribe and its history with the kingdom of Arendelle as well as the backstory of the royal family, I found compelling.

The way that the animation team brought the elemental spirits to life was brilliant, and it only added to the beauty of the film.

Gale, as the air spirit, which would be hard to capture, was quite successfully given a peppy personality with its effects, and the earth spirits in the form of giant rock creatures were striking, but I especially loved the fire and water spirits. Having the ravaging fire end up coming from a tiny and oh so cute magical salamander was smart, and the guard of the river Ahtohallan, the Nokk, was ethereal. The horse made of water was, in my opinion, one of the most impressive of the film’s digital creations.

It was not just the creatures, however, which made up such an extraordinary and magical world. I often felt like pieces of the film were created as if it was a live-action piece. The battle between Arendelle and Northuldra was choreographed dramatically, and the locations were remarkable, from the mythical Enchanted Forest, to the shipwreck. I loved all of the dazzling sparkling snow and ice effects, and the scenes with Elsa in the water were thrilling.

Of course, a large part of what makes the film what it is, is the voice cast. As with the previous film, they all worked really well together, and I greatly appreciated the comedic moments, especially with Olaf and Sven.

The musical score fit perfectly, and the catchy new songs will be enjoyed over and over again by the younger generation.

A sequel doesn’t always live up to the original, but Frozen II comes close, and with such stunning visuals, its sure to be a classic that will delight generations to come.

Bonus Features: (may vary by retailer)

Sing Along with the Movie [1:43:13] - During the songs, the lyrics show on the screen in time to the music


Outtakes [2:27] - Outtakes for an animated film can be a bit different, because they take place in recording booths, but they are still funny. The clips are generally actors flubbing lines and improvising or fooling around.


Did You Know??? [4:28] - This featurette is fun facts about making the movie as well as hidden Easter eggs.


The Spirits of Frozen 2 [12:03] - The cast and crew, including director and screen writer Jennifer Lee and director Chris Buck, talk about the Norse and Scandinavian myths that inspired the elemental spirits and other aspects of the film. Each of the four spirits are discussed, including how they came about, concept art, their personalities, and even how they were created digitally.


Scoring a Sequel [3:50] - Executive music producer Tom MacDougall talks about intertwining songs in the film as a musical, and composer Christophe Back talks about themes and repurposing melodies as well as working with the LA choir.


Deleted Scenes [17:59 total] - There is an option to play all or to choose one at a time. Each scene is introduced by Lee and Buck and is of what looks to be animated storyboards. These would have been nice additions to the film, especially the fourth scene, as it explains more about Anna and Kristoff’s relationship that was left out of the film.

* Prologue [4:08] - The battle between Arendelle and Northuldra

* Secret Room [2:37] - The sisters find out more about their past and that their
mother has been studying magic

* Hard Nokk’s [4:22] - To survive the Nokk, Kristoff reveals to Anna how he really
feels about his life in the kingdom of Arendelle


Deleted Songs [11:42] - There is an option to play all or one at a time, and both have introductions by the directors. The first one I liked a lot as a song, but the second one it was more about the scene, which I would have been pleased to have in the film, as it, as the one deleted scene I mentioned, explains more about Anna and Kristoff’s relationship. They are animated in the way the deleted scenes were.

* Home [4:22] - Anna sings about loving the people of the town and being happy
and where she wants to be.

* I Wanna Get This Right [6:25] - Kristoff tries to propose to Anna, but everything
goes wrong, leaving Anna to take matters into her own hands.


Gale Tests - Two tests, both with introductions by Lee and Buck. In each, the filmmakers discuss bringing Gale to life.

* Gale Test [3:02] - Filmmakers talk about the difficulties in giving invisible wind a
personality. The test is a fully animated test for the effects of the wind in a
scene with a young Iduna and Agnarr

Meet the Lopezes [8:36] - A featurette about the husband-and-wife music composing team behind the songs from the film


Deleted Song - “Unmeltable Me” [2:48] - As with the other deleted songs, this includes an introduction from the directors and is sort of animated storyboards. This song is performed by Olaf and would have been a really cute addition


Also on VUDU (including redemption):

Feast [6:12] - An adorable animated short about a man and his dog


New to Frozen 2 [3:12] - An introduction from the cast and crew talking a bit about different parts of the film and the characters

I was sent the 4K Ultra HD Combo Pack. The normal black clamshell case comes with an embossed slip cover. Inside is a paper with the digital code for the film as well as an ad for the Disney Movie Club.

In my opinion, it is worth purchasing the film in 4K. The colors are super vibrant, and everything is extremely crisp, which just adds to the experience.

Frozen II is an entertaining sequel that both Disney fans and new viewers will appreciate. There are also tons of bonus features that not only talk about how the film was made but give insights into characters with the deleted footage. With the addition of a sing-along version, it has even more replay value. It’s got something for everyone, including an exciting adventure, fantastic songs, excellent visuals, and even some laughs, which can be enjoyed by all ages. I highly recommend this film.
Twitter
BotonSocial por: SocialEmpresa
Category: DVD Reviews