Blu-ray Review: Lucifer: The Complete Fourth Season is a Hell of a Good Time - Available Now

Based on a character created by Neil Gaiman, Sam Kieth, and Mike Dringenberg and taken from the comic book series The Sandman and the subsequent spin-off, Lucifer, the television series Lucifer originally aired on FOX for three seasons. After its cancellation, it was picked up by Netflix for a 10-episode fourth season, which arrived today on DVD and Blu-ray (via the Warner Archive Collection).

The series follows Lucifer Morningstar (Tom Ellis), who came to Los Angeles and bought a bar after deciding to take a vacation from Hell, but who now works as a consultant for the LAPD with partner Detective Chloe Decker (Lauren German). The two work together solving murders, with Lucifer sometimes using his powers of being able to force people to admit their true desires to help the cases along.

During the course of the three seasons, the two became closer and Lucifer started to change his ways.

At the end of season three, the two finally kissed, however, Chloe later saw Lucifer’s devil face, proof that he was really who he claimed to be. 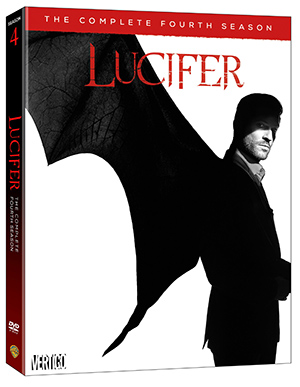 When season four opens, Chloe returns from her month-long vacation, and Lucifer worries how the revelation has affected her. She blows it off, but in reality, she has spent the past month in Rome researching who the devil really is. There she was met by Father Kinley (Graham McTavish), from the “International Association of Exorcists” who believes in a prophecy that Lucifer and his “first love” will unleash evil on the Earth. He wants Chloe’s help to destroy Lucifer at any cost.

Chloe struggles with the things she hears from Kinley, and her relationship with Lucifer only suffers more when he discovers the truth. Things get more complicated and strained when Eve (Inbar Lavi), his old flame and the original sinner, comes to see him, wanting him to return to Hell.

Lucifer wrestles with events and continues to seek help from Dr. Linda (Rachel Harris), who has her own set of problems when she gets some news that will also affect Lucifer’s brother and angel, Amenadiel (D.B. Woodside), who is also dealing with his sister Remiel (Vinessa Vidotto) coming to Earth.

Meanwhile, Maze (Lesley-Ann Brandt) gets close to Eve as she attempts to find her place, while back at the precinct, Dan (Kevin Alejandro), Chloe’s ex-husband, and Ella (Aimee Garcia), who struggles with her faith, deal with Charlotte (Tricia Helfer)’s death in their own ways.

I really enjoyed season four of the series. Each episode has its murder mystery of the week as well as its continuity of the characters’ stories. The show is engaging, and all the characters are written and acted wonderfully, each bringing something to the show. Lucifer and Chloe, however, are my favorites, and I loved seeing their relationship shift and develop this season. There are a lot of ups and downs as Lucifer tries to cope with what he considers Chloe’s betrayal and she struggles with what to do, as well as her feelings for him, especially when Eve enters the picture. However, I also greatly enjoyed Lucifer’s personal journey of discovery as well as his therapy sessions with Linda, as he works to forgive himself and overcome obstacles as he deals with his true self. There are some truly emotional moments for the main characters this season.

The other stories are appealing as well, and surprisingly, as much as I am a Chloe/Lucifer shipper, I really enjoyed Eve. Lavi was an excellent addition to the cast.

Besides the dramatic moments, the season is also laced with Lucifer’s antics, which adds some comic relief.

Lucifer is a great show, and its move to Netflix has not changed that. For something unique and fun, I definitely recommend the show. Although new viewers can jump into season four fairly easily, I suggest watching the first three seasons first if you haven’t already; it's worth it. After watching season four, you will be ready for the final season, premiering later this year on Netflix.

Deleted Scenes  - They can be chosen from the episodes (if there is more than one in the episode, they play together), or they can be accessed from the menu and played in one piece; however, you have to play all three discs to see them all.

Disc One:
Deleted Scenes [2:19] - There are five deleted scenes.


Packaging:
The series comes in both DVD and Blu-ray, and I was sent the latter for review. The set comes in the normal blue clamshell case with three discs. The first two discs contain four episodes each, with the last two on the third disc. The deleted scenes are included on the disc containing the episodes they were removed from. There is no digital code.

Although I do love deleted scenes, as the only special feature on the set, it was disappointing. Also, there aren’t very many and they are short, so they don’t add a lot of value to the set. I also find it slightly annoying that they are not all available on the same disc.


Final Thoughts:
If you are a big fan of the series, it’s worth getting the set to see the deleted scenes, if that is important to you, but otherwise, the worth depends on how much you want physical copies, as the full series is also still readily available on Netflix. That being said, if you don’t have Netflix, it is an excellent series to own.
Twitter
BotonSocial por: SocialEmpresa
Category: DVD Reviews