Blu-ray Review: Emma is a Charming and Amusing Update on a Classic

Emma. is an adaptation of Jane Austen’s comedic nineteenth-century tale of love, matchmaking, and moving beyond the stigma of social classes.

The story takes place in Regency-era England and follows Emma Woodhouse, played by Anya Taylor-Joy, a rich, privileged, and pretentious girl who is entering adulthood. Revered by the town and wanting for nothing, Emma thinks herself quite the matchmaker when her governess, Miss Taylor (Gemma Whelan), marries the man she introduced to her, Mr. Weston (Rupert Graves). Taking a girl, Harriet (Mia Goth), with uncertain parentage under her wing and ignoring the advice of her brother-in-law Mr. Knightley (Johnny Flynn) who she has known for years, she decides to match her up with the local vicar, Mr. Elton (Josh O’Connor), and persuades her to refuse a marriage proposal from farmer Robert Martin (Connor Swindells). Mr. Elton, however, would never marry someone so below his social status and instead proposes to an oblivious Emma.

Emma may believe she doesn’t need a man for herself, but that doesn’t stop her from flirting with Frank Churchill (Callum Turner), Mr. Weston’s son, who seems to favor her, regardless of Mr. Knightley’s warnings. 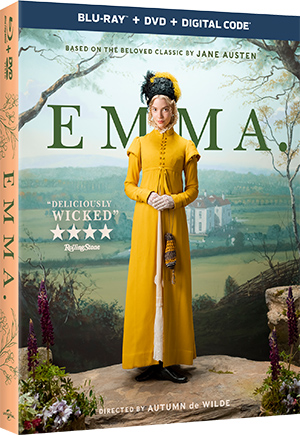 Things start to unravel for Emma as she tries once again to set up her friend as she navigates her own love life. Will Emma be able to stop meddling and set things right, and will she ever notice what has been right in front of her all along?

Emma. is a charming and amusing update on a classic.

The screenplay by Eleanor Catton does a fantastic job of capturing the novel and the time period while making it appealing for a modern audience. It’s both clever and funny.

Taylor-Joy embodies Emma. At the beginning she is arrogant and spoiled, as she should be, and on her journey of self-discovery grows into a more empathetic young woman.

The supporting cast is spectacular as well. Her chemistry with especially Flynn is evident throughout the film, and his jealousy and her obliviousness are perfect.

Goth as Harriet also has an endearing friendship with Emma that builds throughout the film.

Other standouts include Bill Nighy as Emma’s father and Miranda Hart as Miss Bates.

Director Autumn de Wilde recreated Regency-era England in all its splendor with many details that serve to transport you. Everything about it feels authentic and is visually striking.

The costumes chosen are amazing and fit perfectly in the world. The sets themselves are gorgeous and just add even more of a convincing air. The extravagance of Emma’s home of Hartfield is gaudy but breathtaking.

I found myself captivated by both the story and the world and really enjoyed the love story at the heart of it all.

Whether you have read Austen’s book, seen other adaptations, or are completely new to the story, Emma. is an entertaining romance that will appeal to a wide audience.


Bonus Features - These can be played at once or separately.

Deleted Scenes [13:25] - There is an option to play all or one at a time. In my opinion, the scenes were good, but most weren’t really necessary to the film. I would have liked to have seen the last one, “You Owe Me No Apologies,” left in, however, as it explained more of Frank and Jane (Amber Anderson)’s deception and how it affected Emma.

A Playful Tease [4:57] - Director Autumn de Wilde talks about casting, and cast members Taylor-Joy, Goth, Flynn, and O’Connor talk about working with each other. Taylor-Joy discusses already being friends with Goth and how much she enjoyed working with her, as well as the challenges of following the rules of the period. She and the other actors also discuss Emma’s traits, particularly her naughtiness and lack of impulse control, and Nighy touches on the film being faithful to the period.

The Autumn Gaze* [4:47] - In a behind the scenes look, the actors talk about meeting de Wilde and working with her. She has a background in photography which means she was concerned about details in the shots. She and the actors also talk about the rigid and uncomfortable costumes and how it would change the way the actors behaved and moved. Kave Quinn, the production designer, and Stella Fox, the set designer, also talk about collaborating with de Wilde.

Crafting a Colorful World* [4:49] - The production designer, Quinn, talks about de Wilde wanting to create something uniquely period in a way others hadn’t done before. She talks about the location manager, Helene Lenszner, and the difficulties she had in finding locations that worked, especially for Emma’s home, Hartfield. The sets of Hartfield and the Haberdashery are discussed, including color aesthetics and interior design. Coordinating the costumes was also a big part, and the cast and crew talk about what they had to wear and the lack of comfort.

Feature Commentary with Director Autumn de Wilde, Screenwriter Eleanor Catton, and Director of Photography Christopher Blauvelt [2:04:21] – The director, screenwriter, and director of photography talk about the different aspects of filming and production and other behind the scenes tidbits.

Features marked with * indicate the special feature is only available on the Blu-ray and digital versions.

The Blu-ray comes in the normal blue clamshell case with cardboard slipcover. It includes both Blu-ray and DVD discs as well as a digital code for Movies Anywhere. On the flip side of the sheet with the digital copy information is an ad to become an insider for Focus Pictures.

The movie was an enjoyable ride with an excellent story that has a lot of heart.

Although there aren’t a huge number of special features included, the behind the scenes ones I found informative and engaging. It was fun to hear how the world was designed as well as tidbits such as the uncomfortable costumes and how they added to the film. There is also a decent selection of deleted scenes that viewers should appreciate. If you are a fan of Jane Austen or of the film these should be appealing to you and should help make the purchase worth it even if you already watched it in the theater or recently paid the hefty rental fee. I also feel that this movie is the type that can be appreciated more than once.

If you are looking for a witty drama and romance, you should definitely check out Emma.
Twitter
BotonSocial por: SocialEmpresa
Category: DVD Reviews