DVD Review: Lucifer: The Complete Fifth Season is Not to be Missed

Published: Tuesday, 31 May 2022 11:04 | Written by Jamie Ruby
Warner Bros. Home Entertainment provided me with a free copy of the Blu-ray I reviewed in this blog post. The opinions I share are my own.

Today the fifth season of the hit Netflix series Lucifer comes to Blu-ray and DVD. Based on the characters of Neil Gaiman’s Sandman comic book series, the show centers on Lucifer Morningstar (Tom Ellis), who has abandoned his throne in Hell to live on Earth where he runs the nightclub, Lux, and since season one, works as an LAPD consultant, with his partner, Detective Chloe Decker (Lauren German). Together, they solve crimes often dealing with angelic, demon, and other supernatural threats.

By the end of season four, Chloe has not only accepted her discovery that Lucifer is the actual devil but confessed to him that she loves him. This makes Lucifer realize from a prophecy that evil will be unleashed on the Earth. As such, although not returning those three words, after a kiss, Lucifer returns to rule over Hell to protect Chloe and Earth.

Season five originally aired on Netflix in two chunks. In the first half of season five, Lucifer eventually makes his way back to LA, but things are not as he left them, as his twin, Michael (also Ellis), has come to Earth, wanting to take over his identity. Lucifer must face his brother’s actions as well as confront his true feelings for Chloe. In the second half of the season, God (Dennis Haysbert) comes down to Earth, and the fights between Lucifer and Michael come to a head. 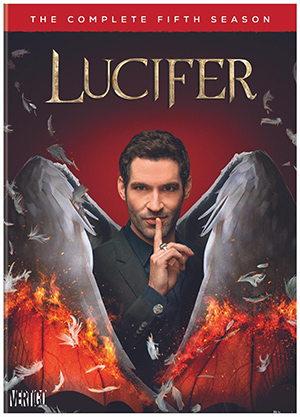 Season five has a lot to offer, with intense drama, its signature comedic style, and lots of action. Each episode has its own murder mystery yet moves the overall story forward. The acting is always superb, the scripts are always fun, and when I watched the episodes when they originally aired on Netflix, I very quickly binged all that I could get my hands on. Fans of the series will love the season, but new viewers should also be able to step in and pick up what is going on. Season five is probably my favorite out of all six, because it has so much to offer through the sixteen episodes. Episode three is tongue-in-cheek and completely makes fun of the series in the best way, whereas episode four takes a different approach with a black and white film noir episode that takes place in the 1940s, and the tenth episode of the season is the long-awaited musical episode (and a year later, I’m still listening to the soundtrack!). There really is a variety throughout the season.

Story-wise, I enjoyed the antagonist of the season, Michael, and Ellis is impressive in his double portrayal. You quickly forget that it’s the same actor; he really embodies both so well. Haysbert also adds a fantastic new element to the mix. Also of note, much of the beginning of the season focuses on Chloe, even going so far as her visiting Dr. Linda (Rachel Harris) for advice, which she of course misinterprets. It’s cool to see a flipside of the usual. The other supporting characters also get their moments, with there even being an episode dedicated to Dan (Kevin Alejandro). Of course, the show wouldn’t be complete with its epic Deckerstar moments, which it has in spades.

Season five of Lucifer is entertaining, thrilling, and at times laugh out loud funny. I highly recommend the series whether you’ve seen it before or not.

Deleted Scenes [4:25] – Six deleted season from three episodes. Most of these are inconsequential and were likely cut for time, but one of them from “It Never Ends Well for the Chicken” is a sweet Deckerstar moment that I would have loved to have seen left in.

I was given the DVD set to review rather than Blu-ray, which is available via online retailers. The set comes in a cardboard slip cover, with four discs, with the deleted scenes with their respective episodes on the first three discs and the gag reel on the fourth disc. Neither set comes with a digital copy.

As wonderful as the season is, the disc set itself leaves something to be desired. Including only a small set of deleted scenes and a gag reel, it might only be worth a purchase for the special features alone if you are a true fan, especially if you already subscribe to Netflix. Considering these episodes are available to stream on Netflix in 4K, I recommend either buying the episodes in digital or on Blu-ray rather than DVD if you want to own them permanately. Regardless of how you watch, Lucifer season five is the best yet and worth a watch (or rewatch!)

For a more detailed review of the season itself, you can read my original reviews of season 5A and 5B. There are also recaps and revews of some of the episodes. You can view all of our previous Lucifer coverage, including interviews, here.
Twitter
BotonSocial por: SocialEmpresa
Category: DVD Reviews