Writer and Director M. Night Shyamalan (The Sixth Sense, Unbreakable, The Visit) delivers his most gripping film yet with SPLIT, an original psychological thriller. Jason Blum (Insidious, Ouija, The Visit, The Purge series) returns to collaborate with Shyamalan in the box-office hit, starring James McAvoy (X-Men: Apocalypse, Victor Frankenstein). The frightening thriller SPLIT delves into the mysterious depths of one man’s fractured mind as a terror unlike the world has seen prepares to be unleashed. SPLIT offers viewers a closer look at the movie fans are raving about with a never-before-seen alternate ending, deleted scenes, character spotlight, and a behind-the-scenes look at the making of the film. Read the full press release.

In preparation for the the release, SciFi Vision is giving away 1 copy of SPLIT on Blu-ray! 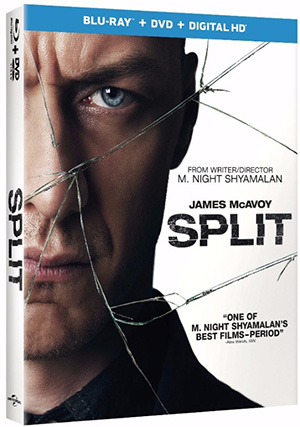 To enter, simply follow the instructions below! Note that you MUST follow @scifivision on Twitter AND tweet the entry to win (and fill out this form), other entries methods will give you more chances of winning (More options will show once you have completed the mandatory ones). Prize courtesy Universal Pictures Home Entertainment, but they are not a sponsor, administrator, or involved in any other way with this giveaway. Contest open to US residents only, no P.O. Boxes. Prize is non-transferable and must be sent to the name of the winner.