The new syndicated talk show, Nick Cannon, premieres today. Host Cannon will bring his own perspective to daytime television with an hour of comedy-driven entertainment featuring celebrity interviews, music performances, and much more.

Recently, Cannon spoke to the media in a video conference about the new Lionsgate show filmed in Harlem.

Cannon told the press that the show would feature more than just celebrities. “The guests on this show are totally just people that I'm fascinated by. I hate the word celebrity, just because of what it's kind of turned into. It’s origin was, you know, ‘people we celebrate.’ So, in that sense, I want to celebrate people daily, but I'm not just celebrating people because they're popular, [or] because they have a new movie out or something. So, it's really people fascinate me in that sense.

“And I've taken a note page out of some of the talk show greats that have come before me that the best interviews are those opportunities where you can introduce your audience to new ideas, new people, new fascinations, and truly be a curator of what we celebrate. 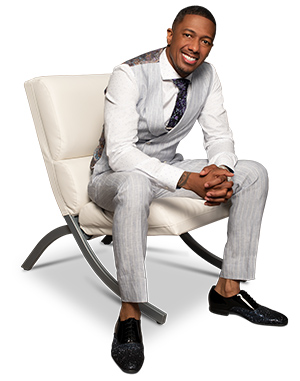 So, of course, because I'm in the space, there'll be people that I'm intrigued by and fascinated by, but I'm truly fascinated by their art. I'm fascinated, because I'm a fan of their book; I'm a fan of their music; I'm a fan of their television show. There'll be friends… [and] I have a lot of friends who tend to be what we call celebrities, or [are] famous, but I don't want people to think that ‘Oh, this is just another celebrity talk show.’ I'm probably more intrigued with people who are doing fascinating things in their communities and in the world. Those are the people that I would love to be that conduit for.”

The host gave more specifics on some of the kinds of talent he hopes to bring together for the show. “I take pride in being a curator, from whether it's my Nickelodeon days to my America’s Got Talent days to my Wild ’N Out days, even currently the people assigned to my record label…This platform is probably even more important than all of them, because every single day I'm truly looking to shine a light on up and coming individuals, and it's not just in the space of artistry, it's whatever they're gifted with…I really want to give people the opportunity to show their gifts [to] the world. They say I got an eye for it, so I'm hoping I could put that to use, daily.

“There're aspects of everything that we have, from random acts of kindness to random acts of talent, and even building a space [for] even some of what we know people for that we don't get to see often, like stand-up comedy. I mean, when's the last time you saw stand-up comedy in daytime television? So, weekly, I want to give our great comedians the opportunity to showcase a clean, fun daytime set, stuff like that.

“Obviously, I thrive in the space of dance and hip hop, and being a musician, I want to give people the opportunity to display those skills as well…Even the idea of being in New York and so close to Broadway, I'm a huge fan of Broadway entertainment. So, I want to bring all of the Broadway stars from today, yesterday, and tomorrow to not only promote their shows, but to have some fun with this on set, and the set is kind of built for that.”

The host feels blessed with what he’s accomplished in the entertainment industry and really wants to create a platform to help others. “I've accomplished everything I've ever wanted to do in entertainment, and now it's like I could kind of take my jacket off a little bit, just offer up my platform to others. I mean, I feel like I'm at that space in my life to where it's all about giving other people opportunities. I don’t need or want to be the best actor, musician, or comedian. I do all of those things, and I do them, because I love them, but now I really want to be the best conduit. I want to be the best provider and storyteller, and this is the perfect platform for it, and I feel like I'm at a space in my career where I get to do that, and I do it with great love. I really want to see people shine, because I've been so blessed up until this point. So, now I'm blessed so I could be a blessing. So, hopefully people feel that each and every day. As much as the show [is] called Nick Cannon, I want to make it about everybody else.”

Cannon isn’t afraid to have tough conversations with his guests. “I've always been an outspoken and unapologetic person, but what I've also learned is there's no need to pontificate, especially in the world that we all have opinions, and we all want to have uncomfortable conversations. Instead of having an uncomfortable conversation, I'm looking for resolution, and if it has to be uncomfortable, action is kind of what I'm more intrigued by. [I want to] not just have uncomfortable conversations, I want to be in uncomfortable situations. I think it's getting out in the field and it's doing the work and not just discussing the work, which is fine, but there're a lot of places where you can discuss the work, but my goal here is to roll up my sleeves and show the efforts. Dealing with all communities and really looking for those resolutions, whatever the situation is, there's no topic that we're going to shy away, from no individual. People have seen my podcast or even a lot of my op eds and the work that I do, it's real to me. It's nothing that I feel like I need to say, ‘Hey look, we're doing this; we're doing that.’ It's just part of who I am…I'm really intrigued with education and really growing as an individual mentally, spiritually, daily…This is a platform where we can open up and not just for discourse purposes, but more to find resolution and solutions and unity.”

To find out more, be sure to visit the show’s site at nickcannonshow.com
Twitter
BotonSocial por: SocialEmpresa
Category: Interviews