Exclusive Video Interview: Aliyah Royale on Battling the CRM in The Walking Dead: World Beyond

Tonight, The Walking Dead: World Beyond returns to AMC. Aliyah Royale stars as high school student Iris Bennet. At the end of last season, Huck (Annet Mahendru) took Hope (Alexa Mansour) back to the facility in New York, leaving her sister, Iris, behind with Felix (Nico Tortorella). She may have lost her sister for the time being, but Iris is as determined as ever, and with the campus colony destroyed, she’s not about to go down without a fight.

Thursday SciFi Vision caught up with Royale for an exclusive interview, and we talked about how the show has changed her life, how she’s adapted to the horror element, why Iris reacted the way she did in the premiere, how much she looks up to Julia Ormond, and more.

***The following interview contains spoilers for the second season premiere*** 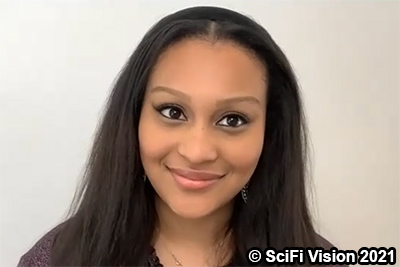 Last time I talked to Royale, she talked about the walkers on set freaking her out, and even now, she laughs about it but is still affected. “You’d think after two seasons that I’d be used to it. I'm not. The makeup effects are literally just that good, especially during night shoots when you're delirious at two in the morning. It looks very real. So, no, I'm not used to it just yet.” She confesses, however, that she hopes it will stay that way. “I like living in that universe and the fear of being real.”

Although some things may not have changed for the actress, other things have. She admits she’s recognized more in public now, but she doesn’t expect it. “Those moments are really, really funny, because I still don't think anyone's talking about me when that happens, but it’s the most loving fan base ever: loud and proud. I appreciate all of that. I'm thankful to be here, and I'm thankful to be a little zombie killer. It’s a lot of fun.”

At the beginning of the season, Hope is gone, and Iris has to go it alone. “I feel as though there was just such a fabulous balance between Iris and Hope of mischievous and just the girl who does the right thing, which is Iris without her sister there without any messes to clean up. And it's almost as if Iris has to become two people at once. She takes on a lot of Hope’s original qualities, and especially throughout the season, it's almost looking at two different versions of Iris the entire time, because she still has that sweet and that loving nature about her and that caretaker side where she just wants everyone around her to be okay, but something switches in her, and she becomes much more dangerous, and I have so much fun playing that. I love a risk taker, and I love when you really have nothing left to lose…There's only hell to raise, and I like that.”

Last season, Iris was just learning to kill empties, but at the end of the premiere episode, she kills a human CRM soldier. The actress talked about how Iris has nothing left to lose. “She's lost everything, literally. When you have nothing left to lose, there's just the lack of fear. There's also this desire to get a little bit of yours back. And I think that that moment with that CRM soldier in those woods, she got a little bit back. She's having these dreams. She had that dream towards the beginning of the episode, where she's ripping [off] an empty’s face. There's that CRM moment, and for her, she's like, “This makes complete sense. Whatever happened back at the campus colony, I don't think it was just about walkers or whatever else. I think there is definitely some very alive people that had something to do with it.” That's her mentality, and she's holding them responsible. So, when she goes out at night, I mean, in this day and age, and in this world of apocalyptic life, she's not going outside for a walk. She's seeking out trouble, and she finds it, and she handles it very well, in my opinion.” 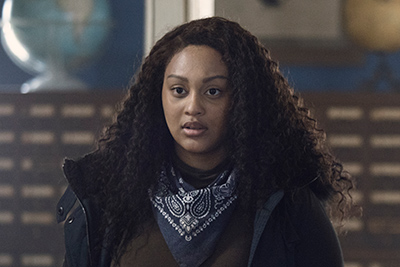 Royale says that her actions aren’t affecting her like killing someone did to her sister. “For Hope it had a much more lasting effect for her. At first, I think when [Iris] makes a decision, she makes a decision. When she's made it up in her mind that the CRM, or the Civic Republic, whoever it may be, needs to be held responsible for what has happened separating her family, having something to do with all of those that were lost, it's a major decision in her mind. So, I don't know that…later on in the episodes that she's gonna go, 'I can't believe that I did this. Oh, my God, what have I done?' I think it's a moment of, 'Okay, I did this, and in the moment, it was the right thing to do, at least for me, and I'm going to continue to operate in that mindset.' ”

While the trailer that has been released for the season does show that Iris will be reunited with her sister at some point, Royale says not to take that as the end all be all. “Iris and Hope are very different people at this point in time and have very different intentions and goals, and I don't know how well their lives or the lives that they want to start living, Hope in the hands of CRM, and Iris on the outside waiting to wreak havoc on the CRM. I don't know how well those go together. Perhaps they don't; perhaps they might work it out. They are sisters, and they'll always be sisters, but people grow apart and come together, and we’re gonna see what happens.”

Watch the full interview in the video below and tune into The Walking Dead: World Beyond every week on AMC.