Cast members along with executive producers Anthony Zuiker and Jason Tracey talked to journalists recently as part of the TCA Summer Press Tour.

Coming back to the series, Petersen and Fox admitted to SciFi Vision there were some difficulties in stepping back into the roles after so much time. For Fox, it had to do with the science and hitting her mark. “Well, I think I was a little rusty, for sure, on all things science. You know, even with this pandemic, like just being on a set and hitting my mark, and really simple actor-y stuff I was a little rusty at.”

Petersen, who hadn’t done any television acting since the finale, told the site he felt the same. “It was interesting, because it's a whole new lab. It's new construction. It's all kinds of new machines, new technology that Grissom wouldn't have been all that comfortable with even ten years ago. So yeah, I mean, I think the skills in the lab itself were sort of rusty, as Jorja says. And so just to be able to do a pipette and make sure that the material you're trying to transfer doesn't end up on the floor…keeping your hand steady is a trick.” 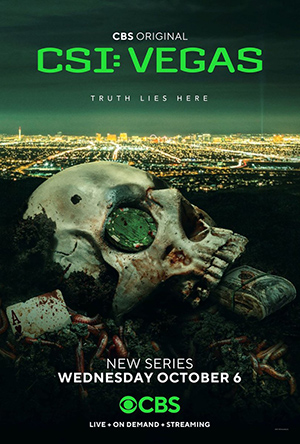 Fox also thought it was a thrill to be back and said that the new characters only add to it. “It is at once just this sort of familiar thing in my mind, and also brand new. Having Jason Tracey and Paula and Matt and Mandeep and Mel gives it a freshness and a newness, plus all the new science. The world, weirdly enough, is even more topsy-turvy than it was in 2000, so there's so much new happening, and yet it was great to sort of be grounded with William Petersen and come back as Sara Grissom. Boy, what a thrill that is, and that sort of, kind of, kept my feet on the ground a little bit.”

Executive producer Tracey also talked about balancing the old characters like Sara and Grissom with the new character arcs as well as serialized elements versus weekly stories.“I inherited a fantastic franchise that sort of works like a Swiss watch, where you want to tell closed-ended case of the week stories and deliver sort of justice inside the body of those 42 minutes that you've got, but this season we're going to spread out, kind of, a serialized arc that…begins in kind of a dramatic fashion with an attack on Brass (Paul Guilfoyle) and on the lab itself. [It] kind of it sets in motion something that Grissom and Sara primarily drive through the course of the season but becomes something that involves all of our new characters as well in kind of a B story sort of fashion. But we don't really think of them as As and Bs. We just think about them as two stories we're telling every week. One wraps up, and one is kind of a link in a chain and hopefully delivers us to an exciting finale.”

Tracey added that they were glad to have the entire ensemble. “We are building something new, but we've got a fantastic blend of returning and new faces, and I think as the season takes shape and progresses, we're seeing people from both eras out in the field. And on the go forward, I think it's about crafting kind of a new story. It will be taking advantage of certain new characters, but hopefully the audience is going to enjoy folks from both eras.”

Besides Grissom, Sara, and Brass, Zuiker teased that there are a few more surprises in store for fans in the way of returning characters.

Newcomer Newsome was grateful to join the group. “When I first found out I was doing this, I was panicked and grateful, overwhelmed and grateful. But having…done this for so many years, I feel really comfortable in my skin when it comes to particularly working with such talented actors as Jorja and Billy and Matt and Mandeep and Mel.”

Lauria chimed in about his preparation for the role and said that they had some experts on set to help. “We've kind of had crash courses as we began the season, and while we were shooting episodes we'd go into our trailer at lunchtime and have a fingerprint-capturing lesson or [learn] how some of the different gizmos worked in the trace lab. So, it’s kind of been sort of more immediately hands-on than the time that I've had to prep before. This has sort of been a learn-on-the-job type of thing, but I think that sort of works in a similar way to the way you would in the real job. You would be arriving, showing up and learning as you go.”

The cast in the new series is diverse, which Rodriguez said that he noticed immediately. “I think it's so important. It reflects what we really see when we walk down the street in our neighborhoods in America. So, we're finally starting to see on TV what America really looks like, and that's beautiful to me. It's so necessary…People are seeing themselves on TV and saying, ‘Oh, I know that guy. I know that girl.’ And it's just wonderful.”

There are also strong roles in both genders. Dhillion talked about playing a strong female character. “It's great to be a young woman, especially in this industry. It's about time that we were all playing leads and playing roles as well…Women are amazing. We run the world. So, yeah, it's great.”

Be sure to check out the premiere of CSI: Vegas tonight on CBS.
Twitter
BotonSocial por: SocialEmpresa
Category: Interviews