Leverage, which premiered Thursday on IMDB TV, is a sequel to the original series and follows the Leverage team as they help those that are taken advantage of by the rich and powerful. The series stars Christian Kane as hitter Eliot and Beth Riesgraf, who also directed this season, as thief Parker.

Kane and Riesgraf recently talked to Jamie Ruby of SciFi Vision in an exclusive interview about working on the back half of the season, including Riesgraf directing, Eliot’s evolving relationship with the marshal, Maria Shipp (Andrea Navedo), the chemistry between all the characters, and more.

The two talked about getting back into the groove of the show. According to Kane, they all clicked again right away. “Dean Devlin, our boss, was very smart, and what he did was, the first scene up, we were all in the scene together. So, not only did we put these hats back on, we're playing these characters, and we'd already high fived and given each other a hug and been happy to be back together and did the table read, which was brilliant, but now we're standing there with these characters again, and how's it going to work? And I thought Dean was so fantastic and smart in thinking about, ‘Let's put them all in the first scene straight up, heavy dialogue, heavy content’…It was almost like trial by fire. I thought it was smart. 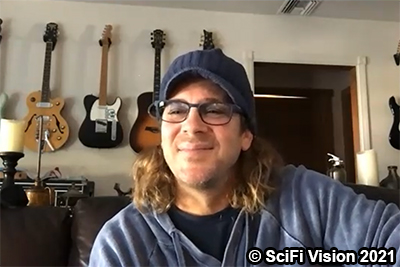 "Then, immediately, everything clicked, and we're like, ‘Wow, these characters are back.’ It took no time at all to fill the shoes up again. Then, even Noah Wyle was in the first scene with us that day, so he got to be thrown into the mix and stuff like that. Dean was very smart by doing that, because he didn't give us an opportunity to overthink it. He just made us do it. I mean, ‘you learn to fight by fighting’ is one of my favorite quotes by Bruce Lee, and that day is exactly what happened. So, he helped us out a lot by finding it again, but once we found it, it was just cake.”

Riesgraf agreed. “I think so much of our chemistry comes from being in the same room with each other. You can rehearse and learn your dialogue on your own, but I don't anticipate anything, because I know the minute I get in there, I'm going to respond and listen and react based on everybody else's motion. And that's exactly how it was at the table read for me. It's like, I did all my work like I normally do to prepare, and then I knew the second I got with everybody, it was just going to click, which it did, within two seconds. That chemistry is so apparent. I think why people love these characters so much is because there is a genuine connection there on screen that just jumps out at you. So, I felt that, personally, when I got in the room and started hearing everybody's voices again as these characters. It was like an overwhelming sense of being home, being safe knowing I had great scene partners to count on, and that's our dynamic. So, for me, it really put me at ease right away.” 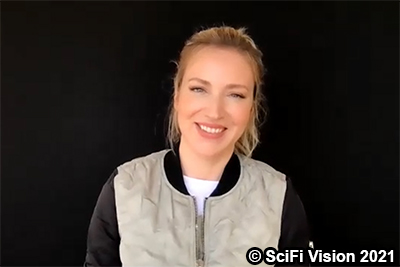 In the back half of the season, Eliot gets closer with Marshal Maria Shipp. It causes Eliot to open up a bit, which is something he’s not good at. “To bring to bring them the marshal in it was fun, because he's never really opened up…but he's talking to Parker about it; he's trying to find some stuff out, but he still keeps it close to the vest, except for in a situation to where we both get trapped in a hotel and…there's no way he can hide it from Parker. So, he's got to be more open, but it's fun, and I liked the way it played out…because I think that for Eliot, I think he thrives when he's a broken toy. I believe that she could have cleaned everything up for him, [but] I don't like that character. I like playing Eliot as a broken guy. That's where his heart comes from and everything else, but you get to see a quick glimpse of what's going on with him, I think it starts with the first episode up and not even with a girl. Beth directed this episode, and [there’s] the unbelievable LeVar Burton, a piece of American history has come in, and I got to act with him. Beth directed it, and I think he opened up to him a little bit, which was strange for him, and I think maybe something sort of broke there, and he was able to be more out there for the marshal. Then, of course, we know how that goes, and it's not a good thing. So, we end the season with Eliot broke again, and I love doing that, because there's somewhere for me to go now, and I get to start over, and I love that.”

Riesgraf talked a bit about directing that and one other episode this season. “It's so much fun directing my friends. Before I was an actor I was a photographer, so I've been really pursuing this career for a really long time, and so the fact that my first episode of TV directing was with a cast and crew that I love like family was such a gift and such a blessing….it's a whole switch of a mindset when you're directing, but at the same time I know these guys so well that I knew we had such a shorthand that it was a breeze to work with them. It was so fun and lovely to watch them as an audience, as such a fan of their work. That bond we have is super strong, so there's a lot of trust going into it, and I had the great gift of knowing that I was going into a really safe supportive environment.”

For the rest of the interview, watch the full video below and be sure to watch Leverage: Redemption, now available on IMDb TV.