Midway through season six, The Expanse’s war for control of the Belt and the rings turned personal for Jim Holden (Steven Strait).  In episode 6.03, “Force Projection,” with the Pella in his sights, Holden had a choice: act as a captain and kill Marco Inaros (Keon Alexander), or act as Naomi’s (Dominique Tipper) partner and spare her son, Filip Inaros (Jasai Chase-Owens).

Holden made his choice but told nobody, knowing most of his crew would not approve. He had to know that someone would follow up on the dud torpedo sooner or later, and sure enough, the secret’s out in the next episode 6.04, “Redoubt”. And while Holden did what he did for Naomi, her reaction took him by surprise. 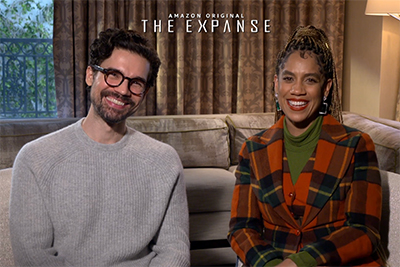 SciFi Vision spoke with stars Steven Strait and Dominique Tipper about this moment in their characters’ relationship. Why, we asked, did Holden not end the war when he had the chance?

Ultimately, “I think it’s he just can’t [kill Filip],” said Strait. “It's just the way it is, and he just can't do it. He loves her too much…It's one of those things where so often you see with hero arcs; it’s like, ‘Oh, you've got to do the right thing.’ And no, this is a human vulnerable moment.”

“I think for Holden the struggle between family and the overarching macro responsibilities that he had…certainly climaxes in a major way this year,” he explained. “He's come to a place where he's honest with himself about who he is, and he trusts his empathy and his instinct. It's a very different kind of hero journey than most people are used to portraying and seeing, and I think his empathy guides the way he leads and the way that he is.”

Naomi's response, said Tipper, is “quite original in that she doesn't want [it]. Yes, it's painful for her, but the thought of [Filip] going forward and hurting more people en masse…I think she's got enough guilt that she's dealing with, and so she reckons with this choice between her boy or saving the universe, as it were. She doesn't want that guilt of all the further amount of people that he could kill.”

“So it's a weird thing,” Tipper added, “that Holden's focusing on the relationship at that point, and then she's focusing on the bigger picture. It's normally almost the other way around, but in this moment, I think it can't be for her. I think she wants to be respected for the twist that she's made for herself, rather than how it seems or how anyone else wants it to be.”

Watch the full interview below and don’t miss the next episode of The Expanse on Prime Video.