With its new series, Dangerous Liaisons, Starz takes on a well-known story from a fresh new angle.

Since its publication in 1782, the French novel Les Liaisons Dangereuses has been adapted dozens of times. Modern audiences are probably most familiar with 1988’s Oscar-winning Dangerous Liaisons, which starred Glenn Close and John Malkovitch as the Marquise de Merteuil and Vicomte de Valmont, bitter exes who use sex and secrets to manipulate and destroy their fellow aristocrats.

But the Starz production is not a retelling; rather, it’s a prequel. Throughout the first season (and presumably the second; it has already been renewed), we see happy couple Camille and Pascal (played by Alice Englert and Nicholas Denton) take the first steps toward becoming the Marquise and Vicomte. It all starts with a collection of sexy letters that fall into the wrong hands, setting the stage for blackmail. 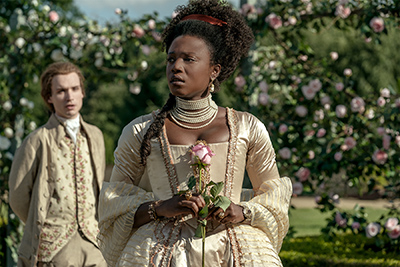 Young Valmont is obsessed with reclaiming the title and fortune he says his stepmother stole from him. Of course, Ondine de Walmont doesn’t see it that way.  As played by Colette Dalal Tchantcho (Domina, The Witcher), she is a force to be reckoned with.

SciFi Vision asked Tchantcho about Ondine’s relationship with Pascal.  “Throughout the story,” she told us, “[Ondine] insists on holding on to something that she wants very much, but I think it's interesting when you see that Valmont wants that same thing very much, too. That creates some great drama.”

Eventually, Ondine crosses paths with Camille, too.  “This whole story is such a chess game,” explained Tchantcho, “and you have to very carefully place yourself at the right time in order to get what you want and there's only so many opportunities. I think this is something that Ondine is very aware of, and Camille very much catches on and ends up being a very good player herself.”

We also talked about the show’s racially diverse casting and the dangers of utting your personal secrets in writing. Watch the video below!

An all new episode of Dangerous Liaisons airs tonight at 8:00 pm ET/PT on Starz, with new episodes each Sunday. You can also find the show on the Starz app.