Tomorrow, Netflix releases its new original CGI anime series, Resident Evil: Infinite Darkness, which is based on the hugely popular survival horror video game series by Capcom, which was first released in 1996 on PlayStation. The series centers around two characters from Resident Evil 2, Federal Agent Leon S. Kennedy (Nick Apostolides) and TerraSave staff member Claire Redfield (Stephanie Panisello), who unite to stop a zombie outbreak and the government from covering it up. The story also introduces new characters Jason (Ray Chase) and Shen Mei (Jona Xiao). The show, which is set between the events of Resident Evil 4 and 5, spans four episodes, which are about twenty-five minutes each.

At the start of the series, viewers learn of the civil war that has broken out in the fictional nation of Penamstan. Leon, working for the U.S. government after saving the presidents daughter, is investigating a hacking incident that was uncovered, when there is an outbreak of the T-Virus in the White House. Meanwhile, Claire, who has been working with refugees from the war and overseeing the construction of a welfare facility, gets drawn into the action while waiting for an interview with the press secretary at the White House. 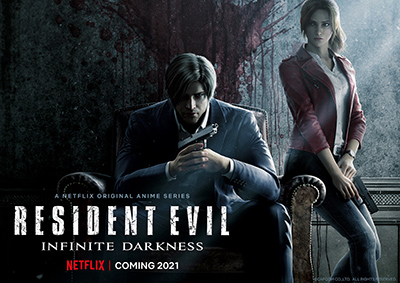 It’s apparent that technology has evolved in recent years, and a lot has been done with the CGI; however, the series has a sort of video game quality about it, and it’s definitely stylized to have an anime feel. Certain parts are super detailed; I even noticed animated dust in the air during one scene, yet the rendered people don’t quite reach as close to the uncanny valley as technology would likely allow, which in the case of a lot of the gruesome violence, is not a bad thing. It really does feel like cut scenes straight out of a game. It’s a little bit jarring at times, but it works well enough for the universe. The lip syncing could have been executed a bit better, however.

While you don’t have to be a fan of the video games or have seen any of the stories surrounding it, it does help to follow the plot and get into the world, as it does feel like it sort of drops you into the middle of the lore. The story itself is enjoyable, if a bit predictable and convoluted, and the voice work is believable. Expect a lot of gore, from crazy mutations to flesh-eating rats, and, of course, the dead tearing people apart.

If you are a fan of the franchise, you’ll likely enjoy this installment. It’s also worth a look if you are into anime or CGI films, but otherwise, you might want to skip it. For what it was, I enjoyed the series and was entertained for the full two hours. If there is a second season I am interested to see it.
Twitter
BotonSocial por: SocialEmpresa
Category: TV Reviews & Recaps