Catch up with the Robertson family’s wildly hilarious Southern antics when the latest installment of the highest-rated nonfiction series on cable, Duck Dynasty®: Season 10, arrives on DVD December 13 from Lionsgate.

Chock full of Robertson shenanigans, the season 10 DVD set includes all 14 episodes on 3 DVDs plus never-before-seen-on-TV deleted scenes! Duck Dynasty®: Season 10 will keep you in stitches from beginning to end when it arrives on DVD for the suggested retail price of $19.98.
Read the full press release.

In preparation for the the release, SciFi Vision is giving away 1 copy of Duck Dynasty: Season 10 on DVD! 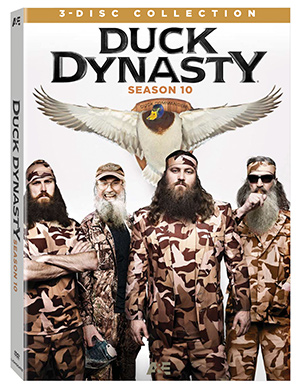 To enter, simply follow the instructions below! Note that you MUST follow @scifivision on Twitter and tweet the entry to win, other entries methods will give you more chances of winning (More options will show once you have completed the mandatory ones). Prize courtesy Lionsgate, but they are not a sponsor, administrator, or involved in any other way with this giveaway. Contest open to US residents only.

Also available for purchase at Amazon.