Tomorrow night, CBS premieres its new series, NCIS: Hawai’i. The series follows a team of navel investigators, led by Jane Tennant (Vanessa Lachey) as they solve crimes on the islands.

Executive Producer Jan Nash talked about creating a unique series with a female lead. “It seems like a long time ago when we started talking about the idea of developing a new version of this franchise set in Hawai’i. When we did start talking about it, what we wanted to do was figure out how we could make it feel different than the other three very successful series that have preceded us. We get no points for landing on the obvious solution, which is a female team leader, but once we'd gotten to that idea, we very quickly had three subsequent ideas that have come to sort of defining our pilot: a jet crashing into a mountain, which gave us a Navy crime, a bunch of nine-year-old girls on a soccer field being coached by Jane Tennant, our hero, wearing a pink camo sweatsuit, and then later in the episode Jane Tennant jumping off a cliff into the ocean to catch the bad guy, that will then help us solve our Navy crime. Those three scenes…really do create a framework for what we think our show is. This incredibly smart, charismatic, courageous, intelligent woman who leads a family of agents at work and goes home to her family.” 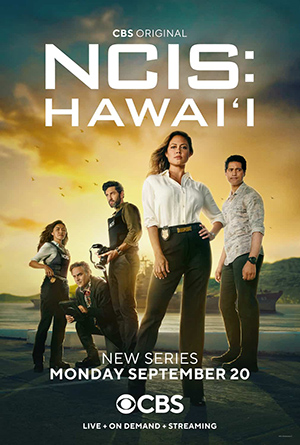 Silber continued, talking about how they found Tennant in Vanessa Lachey. “It's one thing to imagine and create an iconic leading character for a legacy franchise, like Jane Tennant. We'd like to think we're very creative people. We've got a lot of great ideas, but then you have to find the actor who can play the role, who can bring this idea to life. We had a lot of good luck finding all of our amazing cast, but looking for Jane Tennant, someone who was going to be this charismatic leader, became challenging. Luckily Jane Tennant found us. Vanessa Lachey's audition, which was just amongst a bunch of auditions, just stood out in a way that helped ease the neuroses and the anxieties of writers who were pretty sure that we had set up an impossible task. She cleared that for us. Vanessa has all of the qualities of Jane Tennant, and now Jane Tennant has all of the qualities of Vanessa. She's charismatic, she's smart, she's charming, she's empathetic, and she's absolutely someone that I think all of us would follow off a cliff for.”

After creating the character of Tennant, they had to build the rest of the team. Bosack talked about the aspects of the different members. “As the next chapter of this storied franchise, we knew that one of the strengths of it was building a team that has specific and unique skills, specific and unique quirks and backgrounds, but also can exist as a family…The idea was, because we're set in Hawai’i, we knew very early on we wanted to have somebody opposite of Tennant, who is local to the islands, somebody who can kind of go undercover, who has a unique point of view and experience, and that became Kai Homan. We also wanted to have somebody who had kind of that, you know, grizzled cop background, somebody who came from the mainland, kind of to play against the local boy type, and that became Jesse Boone. Then, we wanted to have a character who had this go-getter attitude, that could be fun, that was always willing to do what was needed, and that became Lucy. And opposite of that is who's somebody who can push up against it and is a little bit more buttoned up, comes from a different background and a different part of this world that exists at Pearl Harbor, because there's so many different branches, [and] that became Kate Whistler. And, of course, we needed that character who had the skills to be able to break into things, to hack into different databases, give our team the intel that they need, and that became Ernie Malik. And we were set again and so fortunate to be able to find these wonderful actors who took what we had on a page and give extra layers and breathe life into them in a way that exceeded our expectations and gave us so much more to play with than we ever thought that we had to begin with.”

Silber noted that the cast got along really well right away. “This cast has gelled immediately, right away from the first scenes that they were in together, as a team and as a family. Everyone noted as we watched cuts and we made all the different changes that we were making, they just started from day one as a family, and you can see it. You can see how they're talking to each other. We see it on the screen every day, and that's magical.”

Lachey talked a bit about the importance of Tennant to her. “There are female NCIS stacks out there. They just aren't on TV. So, for me to be the one to represent that, I'm honored. I'm humbled. It's something I don't take lightly, and I'm grateful for every day. But it's not just me. It is this team. They complete me. Not to sound like a cheesy TV line or movie line, but truly, together we are NCIS: Hawai’i, and I believe that.

“I think what it's going to do is just kind of normalize women in this position. They'll see that, yes…I can balance my love and my country. I can be a mom and try to get my daughter off to school, and deal with my ex-husband, as well as take down a multi—million-dollar crime operation and do it while I'm jumping off a cliff with a gun in my hand. So, I do want, not just little girls… [but] everyone to see I can do that, too. When everyone says, a woman, a minority can lead this operation and lead this team, and hopefully do it with grace and compassion and vulnerability, but also honor and respect, then I can, too. So, for me, it really is the perfect role, in the sense that it's human. And I am doing all of these things, but none of it is impossible.”

Nash expanded on Tennant and the team becoming a family. “Having a mom at the head of the team certainly makes it easier, but the truth is, I mean, this is a television cliche. Every television show is a family. So, you're trying to create a group of people that you want to spend time with and who are joined by sort of a common mission and a sense of caring about each other…If they care about each other, it makes it easier for the audience to care about them. If people loathe each other - there are occasionally TV shows where that works, but I think it's harder. In fact - I will speak for me and Chris and Matt - It certainly applies to our cast and our crew as well. We are fundamentally decent people, and I think that we really do want that this TV show leaves people affirmed, to the greatest degree possible, while also telling an interesting Navy crime.”

The cast also said that there are a lot of action scenes in the episodes and talked about getting hurt and being tired from work. Lachey joked, “I never ran that fast. I did my Tom Cruise run, and then I pulled my knee, my groin, both my calves, and somehow my arm. I'm like - never. And it was three seconds in the pilot.”

Silber also talked to the possibility of having NCIS: Hawai’i cross over with another CBS series, such as Magnum P.I. or Hawaii Five-0. “I'm always open to any sort of crossover that CBS will allow. I've experienced it certainly just in the world of the NCIS franchise. It is always exciting and fun. It's fun for those of us participating in it, and it's fun for the audience. So, if they want to come play with us, we would love that opportunity. Name the show, name the day. I at least will be there for it.”

Lachey added that they would love it, but they’ve already done a great job doing their own thing.