Published: Friday, 14 January 2022 14:22 | Written by Karen Moul
***Warning: This story contains major spoilers for the series finale of The Expanse.***

The Expanse’s series finale is out today on Prime Video, and it doesn’t disappoint. The episode is chock full of the thrilling action scenes, narrow escapes and quality effects we’ve come to expect from this fantastic series. And when the war for control of the Belt is finally over, the conflict ends with a deft political maneuver that would make Chrisjen Avasarala proud.

SciFi Vision spoke with the show’s creative team – series creators Ty Franck and Daniel Abraham and showrunner Naren Shankar – about captain Camina Drummer (Cara Gee)’s key role this season. Drummer lost everything: her home, her friends, her family, and everything she thought she knew about the Belt – before becoming a key player in the solar system’s new order.

“One of the terrible things in fiction is being a protagonist,” Abraham deadpanned. “Things never go well for you.” 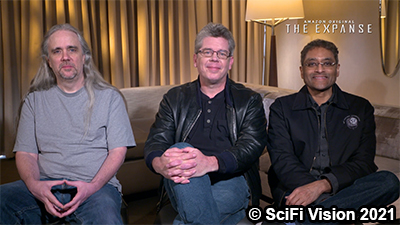 “I think what's really satisfying about her run this season,” added Shankar, “is she doesn't seek these things out. She is not trying to gain power. She's not trying to become the leader of anything. She's simply trying to survive and do her own thing away from a lot of the other stuff, and where it ends up, I think, is incredibly satisfying and feels very earned.”

Franck referred to episode five’s thrilling end, when Avasarala and Drummer meet for the first time. “I think that moment can only happen because those two characters have taken those blows and recognize in each other that this is an opportunity to maybe build something new…If they were still the people they were at the beginning of their respective stories, they would never have had that moment together.”

We also asked about the slow-burning Laconia storyline. Why did the creators leave the protomolecule unresolved? In short, because the story isn’t finished. The show ends after the sixth Expanse novel, but there are three more books (and numerous novellas and short stories) in the series, leaving plenty of protomolecule ahead. The result is a Laconia storyline that feels less like a finale and more like the beginning of a new chapter.

“The protomolecule and the Laconians were such a big part of last season and of the whole show up until now,” said Abraham, “and that dynamic does play into the conclusion of the mainline in a way that it felt really weird to just drop the whole subject. And Naren really liked the idea of pulling the Strange Dogs novella in.”

Shankar agreed. “[T]he protomolecule is the motor that makes so much of The Expanse go in terms of the drama and to not service it at all, it just didn't feel right to us to do it, and Strange Dogs was a great way into it.

“Also, it is weird and fun and odd, right? You don't know where it's going. So, where it goes at the very end is creepy and scary. Yeah, it opens the door, but that's not such a bad thing.”

We couldn’t resist one more question about Camina Drummer’s speech in episode five and the phrase that some fans thought was a shoutout to Game of Thrones. Watch the full interview below, and be sure to check out our other interviews for The Expanse.